MHR has made the Finals. In order to win, we need YOU! This award is more about you than it is about John or any of the contributors. Please vote TODAY!  Just Click the following image to cast your vote for MHR: 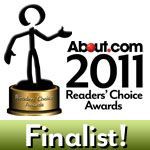 Champ Bailey appreciates Broncos fans' rally - The Denver Post
Fans organized a "Champ Bailey Rally" at Invesco Field at Mile High on Sunday. The turnout was light — about 40, according to organizer Cris Flores — on a windy, brisk afternoon. Then again, this may have been an unprecedented event. Has there ever been a fan rally asking a Denver sports team to re-sign an athlete who is about to become a free agent?

Dusty Saunders: Art imitates life with Mark Schlereth - The Denver Post
The former Broncos guard has a deal with CBS to co-produce "Home Game," a project which would detail, with humor, Schlereth's life following his retirement as an NFL player in 2000.

ProFootballWeekly.com - Broncos face tough choice with OT Harris
Other than CB Champ Bailey, the Broncos' next-biggest free-agent decision will be on ORT Ryan Harris. The former All-Pro tackle struggled at times last season but came on strong late in the season after fully recovering from a left ankle injury he suffered in Denver's final preseason game. We hear that Harris was nearly sent to Chicago at the trade deadline last season before the deal fell apart at the last second. Harris improved in the second half of the season, leaving the Broncos with a tough decision to make.

N.F.L. Players Shaken by Duerson’s Suicide Calculation - NYTimes.com
"Oh my God — he might have been aware of what was happening to himself?" the former Giants running back Tiki Barber said when informed of the circumstances. After taking a moment to collect himself, Barber continued: "It feels like this was calculated and thought-out to some extent. It was almost with a purpose." Randy Cross, a former San Francisco 49ers lineman, said, "It ought to terrify anyone that’s played the game."

Dave Duerson, and Making Football Safer - NYTimes.com
By the way, nobody can say football wasn’t football in the 1950s and 1960s, and players used their heads less. It can be proved by watching video, according to Accorsi. Can football begin to address the problem by going old-school?

2010 NFL season in review, with Aaron Rodgers, Rex Ryan, more - Peter King - SI.com
And not just NFL, but high school and college players too, kids who have had more brain trauma than the human brain was meant to have. As part of my year in review, I'm going to recall the scene I discovered in the fall at a VA hospital in Massachusetts, where a smart neurologist is leading a study on brain trauma in deceased people, trauma that has led to dementia, depression and suicide (in the most extreme cases) among some victims.

Atogwe visits the Redskins Monday | ProFootballTalk
"My agent has been talking to a few teams and we have discussed the possibility of going to different places," Atogwe said. "I’ll meet with [the Redskins] and see what’s up." Balzer reports that the Bills also have an interest in Atogwe.

On the Steelers: Running backs always available
"Ben and I discussed it. He talked about getting together with the wide receivers," Ward said. They suggested meeting at different spots -- all gathering in Pittsburgh and then all gathering in the hometown of each receiver for various workouts. Ward said no plans were made, just discussed. But if the spring drills known as OTAs are affected, the players want to do something.

Five possible landing spots for Bob Sanders | National Football Post
And once we have a new CBA in place, there will be interest for the former Indianapolis safety. Let’s look at five teams (outside of the possibility of re-signing with the Colts) that need to give Sanders a call when we eventually kick off free agency in the NFL.

Breaking down the Jets' 'pick play' in the red zone | National Football Post
Let’s spend some time on this Sunday looking at one of the top man-coverage beaters in the red zone: the "pick play." But before we get to the TV tape of Mark Sanchez’s game winning TD pass to Santonio Holmes vs. the Texans, I want to simplify the route tree inside of the 10-yard line.

Chargers built to contend | National Football Post
Something is missing, though, even though Las Vegas oddsmakers have established the Chargers as a 12-1 shot to win the Super Bowl. They rank behind the Green Bay Packers and the New England Patriots, who are 7-1 co-favorites, and the Pittsburgh Steelers, who are 11-1.

Green Bay Packers news | Art Daley, who covered Green Bay Packers from Lambeau to Lombardi, dies at 94 | Green Bay Press-Gazette
But before he started work on the Packers beat in 1942, the 26-year-old Daley was summoned to the office of Andrew B. Turnbull, the newspaper’s business manager – and an influential member of the Packers’ board of directors – for some guidance. "Mr. Turnbull told me, he said, ‘Just remember. Don’t say anything real bad about our team because if we lose ‘em, we’ll never get ‘em back.’" Daley recalled in a 2009 interview for "Titletown’s Team," a history of the Packers published by the Press-Gazette.

Combine Countdown -- QB Ryan Mallett - CBSSports.com
The other theme you'll see me mention throughout these posts is that interviews and medical testing are infinitely more important to a players' grade than how fast they run, high they jump or times they can lift 225 pounds. Medical testing is critical for obvious reasons. Before you scoff at the importance of the interviews, recall yourself at 21 or 22. Can you honestly say, you'd work harder after someone presented you a multi-million dollar contract? Not many of us have that type of maturity. Not many players do either. And that is precisely who the great scouting teams are looking to weed out, regardless of how athletic they are.

Combine Countdown -- Hawaii RB Alex Green - CBSSports.com
The 2011 class of running backs is a very solid group. There is only one surefire first round pick in my opinion -- Alabama's Mark Ingram -- and two others I see as possibly sneaking into the top 32 (Illinois' Mikel LeShoure and Virginia Tech's Ryan Williams). Because either LeShoure and Williams could leap into the first round conversation with a dynamic showing in Indianapolis, I strongly considered listing them here. I believe entirely too much draft analysis is spent on the top 40-50 players, however. Real scouting begins in the middle rounds and extends into free agency, which is one of the reasons why I'll be watching Green closely.

Angelo always tinkering with NFL draft operation - Chicago Tribune
"Some years, it's just not a good draft,'' Angelo says. "I would say the year we took (Juaquin) Iglesias and Gilbert, it wasn't a good draft, from my perspective — didn't have the numbers of the quality players. Sometime you get a draft like that.'' Gilbert, now with the Jets, was the 68th overall pick, selected in the third round of the 2009 draft. The player picked ahead of him, defensive tackle Alex Magee, was traded to the Buccaneers from the Chiefs and has one career start. Western Illinois product Jason Williams, whom the Cowboys took behind Gilbert, was released and now is a Panthers reserve.

Mike Mayock's Thoughts on Combine - NYTimes.com
Cam Jordan from Cal had a great week in Senior Bowl. Love him. He’s a five technique defensive end. Cam Hayward from Ohio State, if you put on the Sugar Bowl ‑‑ not the Sugar Bowl ‑‑ put their Bowl game on and he dominated that game. It was phenomenal against Arkansas.

Angelo can't fathom a season without football - Chicago Tribune
The tone of Bears general manager Jerry Angelo's voice lowered to a somber pitch when the subject of the looming NFL lockout arose. "We've got a great game and I'm sorry when things get to this point — for the game," Angelo said. "Not for me. Not for the players. Not for the owners. For the game. "This game is special. It brings people together. It galvanizes cities. And during the tough times in this economy … I'm not saying sports is the elixir, but it kind of helps people just have some fun in tough times."

Doty’s jurisdiction could be a dealbreaker | ProFootballTalk
Before the top-secret negotiating sessions began, a league source told us that, from the league’s perspective, removing Doty from the position of resolving certain disputes regarding the language of the labor agreement is a dealbreaker. Though Commissioner Roger Goodell said earlier this month that there are no dealbreakers, Daniel Kaplan of SportsBusiness Journal reports that a top league source said the owners would sign under no circumstances a new agreement that continue to be subjected to "federal oversight."