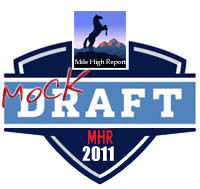 The time has come to get the 2011 Community Mock Draft kicked off. In the comments below just call out which teams you wish to represent, and be sure to check the included table to see which teams are currently available. It is first come first served, and we will be using comment timestamps to allocate teams, and the event of a tie, potential representatives will be pitted against eachother in a battle to the death armed with nothing more than a broken off chinstrap on 2 square yards of FieldTurf.

Interested in representing one of the Broncos' six picks in this years draft? Just say so in the comments! You will be entered into a drawing after all the teams have been assigned. If you get selected, you will be part of a 6 man warroom for the Broncos, with one of their picks where you have final say.

More info below the fold....

Yesterday's introduction to the Community Mock included a rundown of critical info, and you can refer to it here if you have any questions on just what this Mock is all about. It gives a general overview of what to expect as the process unfolds. Note that this isn't what is commonly called a "Live Mock"... Live Mocks run over only a day, where this one takes place over the course of months, in order to allow members time to trade, research, and inform the best picks possible.

So in the comments below, let us know which teams you would like to represent, and whether you are interested in a chance at representing the Broncos. You are allowed to apply for both, if you like. Once all the teams are assigned, the Broncos will be drawn for, and 6 members of the Broncos war-room will be selected. If any of those members who are selected for the Broncos had already been previously given a team, their teams will go back into the pool, and members may once again comment to represent those teams.

The table below will updated often to reflect teams that have been selected. If you see your name on the table, that means that you are the first in line for your team, but it won't be official until you send your current contact info to my email. Once I have your contact information, I will put your name in bold in the below table. Any teams whose reps haven't sent contact info will be put back into the pool after the the Broncos reps are drawn later tonight, so be sure to get contact info sent asap.

Later tonight I will post the results of the drawing, and once all owners and reps have been confirmed, I will post the full list, which will mark the opening bell of the 2011 Community Mock.