Denver Broncos Greats... By The Numbers - The Legend John Elway

Share All sharing options for: Denver Broncos Greats... By The Numbers - The Legend John Elway

With all do respect to Craig Morton, who himself was enshrined in the Broncos' Ring of Fame in 1988, and was the first quarterback to lead the Broncos to the Super Bowl, John Elway is perhaps the Greatest Bronco to wear any number, period. Can the #7 ever be talked about again, concerning the Denver Broncos, without the name John Elway coming next? 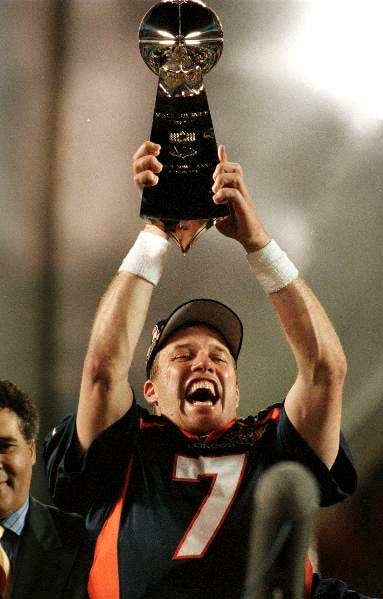 Inducted into the Pro Football Hall of Fame on August 8th, 2004, Elway became the first Bronco enshrined, something we have talked a bit about on this site.

He wrapped up his stellar career by posting the highest quarterback rating of his career (93.0) in his final campaign. At the close of the 1998 season, Elway ranked second among active NFL players for number of appearances with one team (234) and retired having played in and started more games (231) in more seasons (16) than any player in Denver Broncos history. Elway, who retired as the NFL's all-time winningest starting quarterback (148-82-1; .643) and currently trails only Brett Favre in career victories, was voted to a franchise record nine Pro Bowl appearances (1986 season, ‘87, ‘89, ‘91, ‘93, ‘94, ‘96, ‘97 and ‘98)-tied for the most ever by a quarterback (Favre, Dan Marino, Warren Moon)-and as a starter six times (‘87, ‘89, ‘93, ‘96, ‘97 and ‘98). He was the NFL's Most Valuable Player in 1987 and AFC Player of the Year in 1993, and he was named AFC Offensive Player of the Week 15 times and AFC Offensive Player of the Month twice. Elway was named the Edge NFL Man of the Year for 1992 and was inducted into the Colorado Sports Hall of Fame in 1999 while also being named to the NFL's All-Decade team for the 1990s (first team). He ranks third behind Favre and Marino in most major NFL career passing categories, including passing yards (51,475), attempts (7,250), completions (4,123) and total offense (54,882). He also figures fourth in total touchdowns (behind Marino, Favre and Fran Tarkenton) with 334 (300 passing/33 rushing/1 receiving), fifth in passing touchdowns with 300 and second among NFL quarterbacks in career rushing attempts (774) while figuring sixth in rushing yards (3,407). Elway is the only player in NFL history to pass for more than 3,000 yards and rush for more than 200 yards in the same season for seven consecutive years (1985-91). He generated 4,771 of the 5,806 points (82.2%) scored by the Broncos during his 16-year tenure with the club. Elway ranks No. 1 in NFL history in fourth-quarter, game-winning or game-saving drives with 47 (46-0-1 record) and had 36 career 300-yard passing games in the regular season, third among active quarterbacks at the time of his retirement (Marino, Moon). He also caught three passes in regular-season play for 61 yards, including a touchdown of 23 yards from Steve Sewell in 1986. In 1997, Elway broke his franchise record for consecutive passes without an interception with the streak reaching 189 attempts. For his career, Elway had 19 games in which he completed 70 percent or more of his passes (min. 20 att.) and fashioned a 17-2 record in those games. He started 2,595 drives as a
pro and was replaced just 10 times due to injury (.039%).

In playoffs, Elway was usually at his best. Elway played in a franchise-record 22 postseason games (including five Super Bowls) with 21 starts and produced a 14-7 record (9-2 at home, 3-2 on the road and 2-3 at neutral sites). He is the only quarterback ever to start in five Super Bowls and has the NFL's all-time best record as a starting quarterback in Conference Championship Games at 5-1. The other quarterbacks with four Super Bowl starts are Tom Brady, Jim Kelly, Joe Montana, Terry Bradshaw and Roger Staubach. Elway owns or shares 18 Broncos postseason records, including most passing yards, most touchdown passes and total offense (combined rushing and passing yards). He completed 355 of 651 passes (54.5%) for 4,964 yards with 27 touchdowns and 21 interceptions. He also rushed 94 times for 461 yards (4.9 avg.) with six touchdowns and caught one pass for 23 yards in postseason play. Elway ranks third in NFL postseason history in passing yardage (trailing only Montana-5,772 and Brett Favre-5,311), fourth in pass attempts (Montana-734, Favre-721, Marino-687), fifth in completions (Montana-460, Favre-438, Marino-385, Brady-372) and fifth in passing touchdowns (Montana-45, Favre-39, Marino-32, Bradshaw-30). In Super Bowl play, Elway ranks second in pass attempts (152), fourth incompletions (76), second in passing yards (1,128) and tied for second in rushing touchdowns (4) with Franco Harris and Thurman Thomas (Emmitt Smith has 5). Six of Elway's NFL-record 47 fourth-quarter, game-winning or game-saving drives came in the postseason.

Elway's #7 is one of only 3 retired numbers in Broncos' history, joining Frank Tripuka's #18 and Floyd Little's #44. Elway went on to spend time as the President and Chief Executive Officer of the Colorado Crush of the Arena Football League, a franchise that he co-owned with Pat Bowlen and Stan Kroenke. The team was formed in June 2002 and began play in 2003. On June 12, 2005, the Crush defeated the Georgia Force 51-48 to capture ArenaBowl XIX.

The next challenge for Elway, of course, came earlier this year when Elway returned to the Broncos as Vice President of Football Operations. His task is a large one - to rebuild the Broncos back to the glory of his playing days - but one he has jumped into with both feet - in true Elway fashion.

I could go on and on forever about Elway, his impact on the team, the city or the fans, but I will leave that to you.