Denver Broncos Greats ... By The Numbers - Behind Every Great Quarterback Is A Great Backup

Share All sharing options for: Denver Broncos Greats ... By The Numbers - Behind Every Great Quarterback Is A Great Backup

Five different quarterbacks have worn the #8 in Denver, all five primarily backups during their careers.  Some have been vilified, one because he was drafted to replace a legend well before his time (Maddox), while another showed promise until a pickup basketball game got in the way (Lewis).

However, one #8 stands out from the crowd.   From trusted teammate to respected coach, Gary Kubiak was the consummate professional.  Seemingly comfortable in the shadow of greatness, Kubiak was a calming influence both as a backup and a coach to John Elway. He later tutored a series of quarterbacks including Brian Griese and Jake Plummer.

A quick trivia question.  What quarterback was drafted by the Denver Broncos in 1983?

The Answer - Gary Kubiak.  Try it in a bar some night with your Broncos Fan friends.  You'll get someone to bite.  Kubiak was drafted in the 8th round that year, the same year the team acquired the rights to John Elway in a trade with the Baltimore Colts.  Destined to be linked forever, Kubiak relished in the role as a mentor and friend to Elway, especially in the early years when things didn't always go so well for #7.   While Kubiak didn't see all that much action in his time as a quarterback from 1983-1991(14 touchdowns and 1,920 yards in nine seasons), Broncos fans will always remember Kubiak's stellar performance against the Buffalo Bills in the 1991 AFC Championship Game.

Appearing in his last NFL game as a player, Kubiak entered the game for an injured Elway with the Broncos trailing 10-0.  Kubiak quickly led the Broncos on an 85-yard TD drive.  After recovering the onside kick, Kubiak was moving the troops again before a Steve Sewell fumble ended the comeback.

After retiring, Kubiak returned to his alma mater, Texas A&M, to coach running backs (1992-1993).  He returned to the NFL in 1994 as the QB coach in San Francisco, working under then-49er Offensive Coordinator Mike Shanahan.  When Shanahan was hired as coach of the Broncos in 1995, Kubiak came with him, becoming the Offensive Coordinator and reuniting with John Elway.

In 11 seasons under Kubiak, the Broncos offense amassed 66,501 total yards and 465 touchdowns, the most in the NFL during that span. He has coached 14 different Broncos that made the Pro Bowl, including running back Terrell Davis, who was named the NFL MVP in 1998.  Three different quarterbacks earned Pro Bowl honors as well, with Elway, Brian Griese and Jake Plummer enjoying their best seasons under Kubiak.  Kubiak earned three Super Bowl rings in his time as an assistant coach, is one of just 15 NFL coaches to win a Super Bowl with two different franchises (San Francisco, 1994) and one of just nine to win a title with a team from each conference.

Perhaps the most dramatic numbers regarding Kubiak is the Broncos record with and without him on the coaching staff: 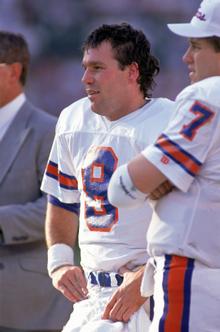 Kubiak left the Broncos after the 2005 season to return home to Texas.  As Head Coach of the Houston Texans, Kubiak again appears to have a team on the right track.  The Texans seemed prime to make a run at the playoffs in the near future, and from we have seen from Kubiak he'll have them there.

Whether it was his actions while wearing the #8 or his contributions after he hung his jersey up for the last time, Gary Kubiak has had a huge effect on the Denver Broncos.  For that, Gary Kubiak is the Greatest Bronco ever to wear the snowman.