Denver Broncos Greats... By The Numbers: #23

Share All sharing options for: Denver Broncos Greats... By The Numbers: #23

The number 23 jersey has been worn by eighteen Bronco players. Six Safeties, five Cornerbacks, three Defensive Backs and four Running Backs. Something Orange, something Blue, someone from the old and well...maybe not so new.
Without further ado, here are the candidates...
Renaldo Hill S 2009-Present
Andre Hall RB 2007-08
Marques Anderson S 2005
Willie Middlebrooks CB 2001-04
Jason Moore S 1999
Darrien Gordon CB 1997
Ronnie Bradford CB 1993-95
Sammy Winder RB 1982-90
Chris Pane DB 1976-79
Billy Hardee CB 1976
Alfred Haywood RB 1975
George Hoey DB 1975
Maurice Tyler S 1973-74
Steve Preece S 1972
Dickie Post RB 1971
Drake Garrett CB 1968-70
Gene Sykes DB 1967
Goose Gonsoulin S 1960-66
As I did with the last post in this series, I shall list players of the same position together.
The Defensive Backs
Gene Sykes was drafted by the Philadelphia Eagles in the 8th round (106th overall) of the 1963 NFL Draft and the Buffalo Bills in the 19th round (148th overall) of the 1963 AFL Draft. He ended up playing 3 years with the Bills before arriving in Denver. Sykes played one year for the Broncos appearing in 4 games, making 2 interceptions and recovering one fumble.

George Hoey appeared in one game with the Broncos in 1975 and didn't compile any stats.

Chris Pane was signed as an Undrafted Free Agent in 1976 after a year in the World Football League. He played in 40 games, in his 4 year career, with the Denver Broncos as a part of the famed "Orange Crush" defense. Chris helped lead the Broncos squad that captured the 1977 AFC Championship and reached the franchise’s first Super Bowl. As a DB, Pane forced one fumble, but his real contributions came as a Return man. Chris returned 12 punts for 66 yards and 20 kickoffs for a 20 yard average.

The Cornerbacks
Drake Garrett was drafted by the Denver Broncos in the 4th round (102nd overall) of the 1968 NFL Draft. He started 13 of the 15 games he played making 2 interceptions, 1 forced fumble, 1 fumble recovery ans 3 kick returns for a 25.7 average.

Billy Hardee played 2 games for the Broncos in 1976. He was a starter for the New York Jets in 1977 and was a two-time All-CFL pick for the Toronto Argonauts. He also played for the (CFL) Ottawa Rough Riders and the Philadelphia/Baltimore Stars of the USFL.

Ronnie Bradford was drafted by the Miami Dolphins in the 4th round (105th overall) of the 1993 NFL Draft. He appeared in 26 games and started 4 for the Broncos. He made 37 Tackles, 1 Sack, 1 interception, 1 forced fumble and 2 fumble recoveries. After playing for the Broncos, Ronnie continued his career with Arizona (1996), Atlanta (1997-2001) and the Minnesota Vikings. With the Falcons, he played in Super Bowl XXXIII and recorded an interception from Broncos quarterback John Elway in the game. Upon retiring Ronnie spent six seasons (2003-2008) coaching defense and special teams for the Broncos.


Darrien Gordon was drafted by the San Diego Chargers in the 1st round (22nd overall) of the 1993 NFL Draft. He played there for 3 years before joining the Broncos. He started all 32 games he played in Denver as the starting right Cornerback and Punt Returner. He returned 74 punts for a 12.5 average and 3 touchdowns. Defensively, Gordon accumulated 126 Tackles, 2 Sacks, 8 interceptions, 2 touchdowns, 2 Forced Fumbles and 5 Fumbles recovered.
Wiki highlights Darrien's term in Orange:

Gordon had a great season in 1997, with 4 interceptions for 64 return yards and a touchdown, while recovering 4 fumbles. He also had a great year as a punt returner, gaining a career high 543 yards and scoring a league leading 3 touchdowns. His team finished the season with an 12-4 record and made it to Super Bowl XXXII, where Gordon won his first championship ring. In the following season, the Broncos recorded a 14-2 record and made it back to the Super Bowl again. Gordon's performance in Super Bowl XXXIII was a key factor in Denver's 34-19 win over the Atlanta Falcons. He intercepted 2 passes from Falcons quarterback Chris Chandler in the end zone during the fourth quarter and returned them for a total of 108 yards, setting up 2 Broncos touchdowns that put the game out of reach. His 108 interception return yards were a Super Bowl record. He also was a big factor in Denver's win over the New York Jets in the AFC title game that year, intercepting two passes from Vinny Testaverde and returning a punt 36 yards to set up a Terrell Davis touchdown.

He played for the Oakland Raiders in the next 2 seasons and then a year with the Falcons before finishing his career back with the Raiders. During his 9 year NFL career, Darrien played in 4 Super Bowls (XXIX, XXXII, XXXIII and XXXVII) an was a 4-Time All-Pro (1994, 1996, 1997, 2001). He also has the distinction of being one of the few players who have been drafted in the 1st round after not being invited to the scouting combine. At the time of his retirement in 2002, his 3,601 punt return yards were the 3rd most in NFL history. It should be noted that Darrien wore #23 in 1997 and #21 in 1998.

Willie Middlebrooks was drafted by the Denver Broncos in the 1st round (24th overall) of the 2001 NFL Draft. He spent 4 years in Denver, appearing in 51 games and starting only 2. He made 27 tackles, 1 Sack, 6 Pass defenses and recovered 1 Fumble. Considered a huge bust for the Broncos, Willie now plays for the Toronto Argonauts of the Canadian Football League.

The Running Backs
Dickie Post was drafted by the San Diego Chargers in the 4th round (94th overall) of the 1967 NFL Draft. He played in 2 Pro Bowls (1967) and 1969. He played the first six games in 1971 with the Denver Broncos and ended playing for the Houston Oilers. Dickie started one game in Denver and had 44 yards on 18 carries to go with 4 catches for 46 yards and a touchdown. Post also returned 5 kickoffs for a 23.2 yard average.

Alfred Haywood appeared in two gamed for the Broncos in 1975.

Andre Hall was signed by the Tampa Bay Buccaneers as an undrafted free agent in 2006. He spent the year on the Practice Squad of the Bucs and the offseason roster for the Chicago Bears before making his debut in 2007 with the Broncos. Hall played in 18 games and started one in the 2 seasons in Denver. He rushed for 360 yards and 2 touchdowns on 79 carries for a 4.4 average and adding five catches for 94 yards. Andre also returned 40 kickoffs with a 23.6 yard average. He spent offseason in 2009 with the Houston Texans and currently is a member of the Omaha Nighthawks of the United Football League.

Sammy Winder was drafted by the Broncos in the 5th round (131st overall) of the 1982 NFL Draft. He spent his whole 9-year career in Denver, starting 83 of 127 games at Running Back. Winder rushed for 5,427 yards, 39 touchdowns and caught 197 passes for 1,302 yards, 9 touchdowns. Each time he scored, Sammy would celebrate with his iconic "Mississippi Mud Walk." He made the Pro Bowl twice (1984 and 1986), and was a key element in helping the Broncos to three Super Bowl appearances in the 1980s. Winder was a steady and reliable Running Back for the Broncos. He only eclipsed the 1,000 yard mark once (1984) and his longest career run was 52 yards, but he could get you 3.5 yards a carry all game long. In preparation for his life after football, Winder bought some Heavy Equipment during his playing career and now runs his own Construction company. He is 3rd All-Time in Bronco history (behind Terrell Davis and Floyd Little) with the 3rd Most Career Rushing Attempts (1,495), Yards (5,427) and Touchdowns (39).

The Safeties
Steve Preece was signed as an Undrafted Free Agent by the New Orleans Saints in 1969. After a year with the Saints and 3 with the Philadelphia Eagles, Preece came to the Broncos via trade in 1972. He started 8 of 13 games, with 1 interception and Recovered 2 Fumbles. He was traded to the Los Angeles Rams in 1973.

Maurice Tyler was drafted by the Buffalo Bills in the 10th round (235th overall) of the 1972 NFL Draft. He appeared in 28 games as a Bronco, starting 2. He made 1 interception, 2 Fumble recoveries, returned 4 punts an average of 5.0 yards and returned a kickoff 23 yards. After his time with the Broncos, Maurice played for the San Diego Chargers, Detroit Lions, New York Jets, and Giants during his career.

Jason Moore appeared in 6 games for the Broncos in 1999 without compiling any stats. He split the following season between the Green Bay Packers and the San Francisco 49ers.

Marques Anderson was drafted by the Green Bay Packers in the 3rd round (92nd overall) of the 2002 NFL Draft. He spent two seasons in Green Bay, a year in Oakland and part if the 2005 season before coming to Denver. He appeared in 6 games for the Broncos and made 3 tackles.

Renaldo Hill was drafted by the Arizona Cardinals in the 7th round (202nd overall) of the 2001 NFL Draft. He's also played for the Oakland Raiders and Miami Dolphins. Hill joined the Broncos on February 27, 2009, signing a 4-year, $10 million contract. In his 2 seasons in Denver, Renaldo has started all 31 games at Safety. He has made 122 tackles, 2 Sacks, 4 interceptions, 10 passes defensed, forced 2 fumbles and recovered one.

Although a case could be presented for Darrien Gordon or even Sammy Winder here, there is one choice that stands above those two.
The Greatest Bronco to wear #23 is...
Austin "Goose" Gonsoulin S

Goose Gonsoulin is the Original Denver Bronco, being the first selection in the 1960 season. He made the first interception ever in the American Football League, in the very first AFL game against the Boston Patriots. Goose had seven interceptions in his first three games, and his 11 picks in 1960 are still a Denver club record. He spent 7 years as the Broncos Right Safety, with 43 interceptions including 2 for touchdowns. Goose had one Punt Return and a kick return of 38 yards. Gonsoulin's amazing durability and toughness enabled him to start 61 consecutive games at one point in his career.
Tim wrote a more inclusive article on Goose here.

His 1965 Topps football card had this to say on the back:

When this aggressive player doesn't "blitz" the quarterback, he lays back and pilfers off their passes. Like an uncaged tiger, he swarms all over the field causing the offensive team mayhem.

Some of Goose's distinctions:

MHR acknowledges Austin "Goose" Gonsoulin as the greatest Bronco to wear #23 with a Mile High Salute. 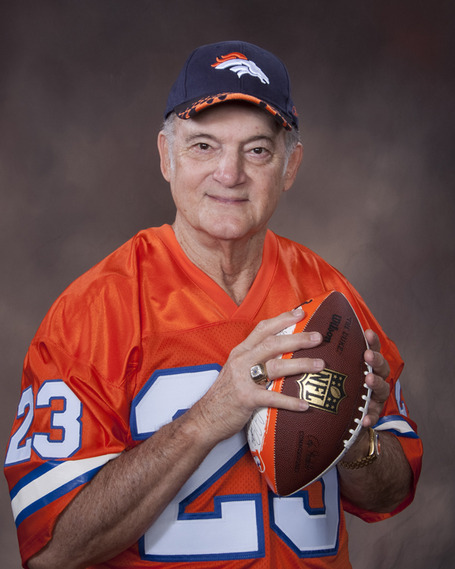