Share All sharing options for: Denver Broncos Greats . . . By The Numbers: #29

The number "29," for the most part, has represented a group of rather obscure names in the annals of Broncos history. This collection of six running backs and five defensive backs are largely unknown to the majority of Broncos fans.

Let's take a jump and learn more about these often overlooked figures from Denver's past.

Darren Carrington DB 1989
Appeared in 16 games with 0 starts. Intercepted 1 pass. Recorded 16 tackles. Returned 1 punt for 0 yards. Returned 6 kickoffs for 152 yards. Was Denver's kick returner in Super Bowl XXIV where he returned 6 kicks for 146 yards. Had a 39 yard return in SB XXIV that set up the Broncos only touchdown of the game.

Aaron Craver RB 1995-96
Appeared in 31 games with 25 starts. Rushed 132 times for 565 yards with 7 touchdowns. Caught 82 passes for 666 yards with 2 touchdowns. Only fumbled twice. Recovered 1 fumble. Returned 7 kickoffs for 50 yards. Threw 1 pass - didn't complete it. Has the distinction of being the only player in NFL history to catch a touchdown pass from both John Elway and Dan Marino.

Howard Griffith FB 1997-2001
Appeared in 59 games with 56 starts. Rushed 35 times for 117 yards with 1 touchdown. Caught 68 times for 445 yards with 6 touchdowns. Did not have a single fumble. Recovered 3 fumbles. Was nicknamed "The Human Plow" as a tribute to his powerful blocking for Terrell Davis. Was part of both of Denver's Super Bowl winning teams. Was a major contributor in SB XXXIII, scoring 2 rushing touchdowns and catching a key pass in the fourth quarter to set up Denver's final touchdown.

Damien Nash RB 2006
Appeared in 3 games. Rushed 18 times for 66 yards. Caught 4 passes for 41 yards. Recovered 1 fumble. Spent first part of year on the practice squad. Won the 3rd string position behind Tatum Bell and Mike Bell. Nash tragically collapsed after a charity basketball game on Feb. 23, 2007, and was later pronounced dead. This tragedy came just one month after the shooting death of Denver CB Darrent Williams. Mike Shanahan said of Nash "We never had a guy play for one year, as Damien did, and influence so many people."

This was a relatively easy choice to make. Out of the eleven players to wear the number 29, six were with the Broncos for only a single season. Only three of the wearers played for more than two seasons. Out of that group of three players one player: 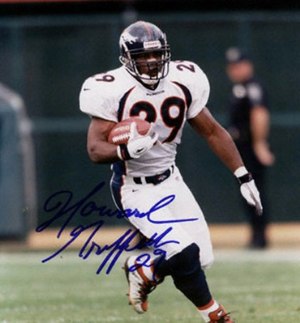 MHR gives a Mile High Salute to Howard Griffith as the Greatest Bronco to wear #29.