Share All sharing options for: Denver Broncos Greats . . . By The Numbers: #21

20 players, in 36 out of 51 years, 14 defensive backs (safeties, cornerbacks, undefined defensive backs), 5 running backs, and 1 LB. Some well known to us, some rather obscure and a couple of very interesting stories. Take a jump with me and meet the men who wore #21.

Eugene Mingo HB/K 1960-64
Appeared in 59 games with 0 starts. 185 rushes for 777 yards and 8 touchdowns. 47 catches for 399 yards and 3 touchdowns. Kicked 72 field goals in 119 attempts. Kicked 120 PATs in 126 attempts. Is considered to be the first African-American placekicker in American football. Was the first in the AFL to return a punt for a touchdown. Scored first points in Mile High Stadium with an 18 yard field goal. Led the AFL in scoring in 1960 and 1961. In 1961, threw two halfback passes for touchdowns -- both to Lionel Taylor. Holds the franchise record for longest scoring run (82 yards vs Oakland in 1962). Was voted into the 1962 Pro Bowl and earned 2nd Team All-Pro honors the same year.

Goldie Sellers DB 1966-67
Appeared in 27 games with 0 starts. Returned 10 punts for 73 yards. Returned 25 kickoffs for 661 yards and 2 touchdowns. Intercepted 10 passes and returned one for a touchdown. Fumbled 6 times.

Tommy Luke LB/Jesse Stokes DB 1968
Both listed in the Denver Broncos Media Guide as having worn #21 in 1968. Although PFR listed them with separate numbers, an inquiry to Patrick Smyth (the Broncos' Executive Director of Media Relations) brought this response:

"Thanks for the e-mail. Our media guide should supersede any other resource for Broncos-related inquiries, so you should trust that . . . Our all-time numerical roster takes information from previous media guides (dating back to our inaugural season), game programs and game notes collected over the years."

Randy Poltl DB 1975-77
Appeared in 39 games with 2 starts. Intercepted 1 pass. Recovered 1 fumble which he returned for a touchdown.

Myron Dupree CB 1983
Appeared in 16 games with 0 starts. Did not accumulate any statistics.

Earl Johnson DB 1987
Appeared in 3 games with 3 starts. Did not accumulate any statistics.

Darrien Gordon 1997-98
Appeared in 32 games with 32 starts. Returned 74 punts for 922 yards with 3 touchdowns. Recorded 2 sacks. Intercepted 8 passes with 189 return yards and 2 touchdowns. Forced 2 fumbles and recovered 5 fumbles. Was voted to 1st Team All-NFL by both the Sporting News and Pro Football Writers in 1997. Was voted to the Associated Presses' 2nd Team All-NFL in the same year. Was a part of the Broncos' Super Bowl teams in both Super Bowl XXXII and XXXIII. He set a Super Bowl record in SB XXXIII b returning 2 punts for a combined 108 yards. Those two returns set up Denver touchdowns that put the game out of reach.

Scott Turner CB 2003
Appeared in 9 games with 0 starts. Did not accumulate any statistics.

Appeared in 7 games with 3 starts. Rushed 44 times for 249 yards -- a 5.7 yard per carry average. Scored 2 rushing touchdowns. Caught 10 passes for 57 yards. Returned 1 kickoff for 8 yards. Resigned with the Broncos after having been traded to the Detroit Lions in the deal that brought Dre Bly to Denver. Was not resigned following the 2008 season.

Andre Goodman CB 2009-10
Appeared in 24 games with 24 starts. Recorded 1 sack. Intercepted 5 passes. Defensed 25 passes. Recovered 1 fumble which he returned 30 yards for a touchdown. Accumulated 56 tackles and 4 assists. Was brought in by McDaniels to try and shore up a struggling defense.

This was a tough one to call. I could see reasons to go with either one of two players: Gene Mingo, or Darrien Gordon. In favor of Gordon is the fact that he was an instrumental part of the Broncos' two Super Bowl wins, setting a Super Bowl record for punt return yardage in Super Bowl XXXIII -- two punts that helped set up two Denver touchdowns. Working against Gordon is the fact that he was a transplant from the Chargers (LOL). In favor of Mingo is that he was one of the very first Broncos in 1960 and set a number of firsts: first African-American placekicker, first punt return for a touchdown in the AFL, first points scored in Mile High Stadium (an 18-yard field goal) as well as leading the AFL in scoring it's first two years and holding the franchise record for the longest scoring run. So . . . . 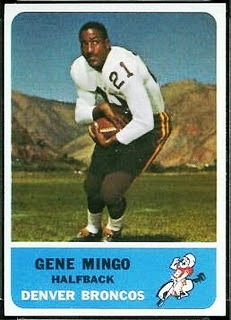