Share All sharing options for: Denver Broncos Greats . . . By The Numbers: #39

Ever notice how there just always seems to be those numbers that nobody wants to wear? #39 has been worn for only twenty-one out of Denver's fifty-one seasons of existence, by only eight players. Thirteen of those twenty-one years were accumulated by just two players. Let's take a jump and see who these stalwarts were who wore #39.

Ray Crockett CB 1994-2000
Appeared in 106 games with 104 starts; logged 380 tackles and 49 assists; recorded 10.5 sacks; intercepted 17 passes and returned 2 for touchdowns; forced 7 fumbles and recovered 4 fumbles; returned 1 fumble for a touchdown; returned 1 kick for 8 yards; was first in the NFL in 1995 in fumbles returned for a touchdown; was a part of both of Denver's Super Bowl wins.

Kyle Johnson FB 2002-07
Appeared in 45 games with 24 starts; rushed 9 times for 39 yards and 1 touchdown; caught 33 passes for 323 yards and 8 touchdowns; never fumbled; returned 2 kicks for 22 yards; was signed in 2002 but was inactive for the season; spent 2003 moving between the practice squad and active roster; got the starting FB job in 2004 when injuries moved FB Reuben Droughns to RB; suffered a season-ending injury after three starts; was cut, resigned then cut again in 2007.

Vernon Fox S 2008-09
Appeared in 12 games with 3 starts; recorded 8 tackles and 7 assists; recovered 1 fumble which he returned for a touchdown.

This is one of those player groups which has little debate about who was the best to wear the number. How can we go with anyone other than the player who appeared in the most games (by 61), had the most starts (by 80) and contributed to the Broncos earning two Lombardi Trophies. 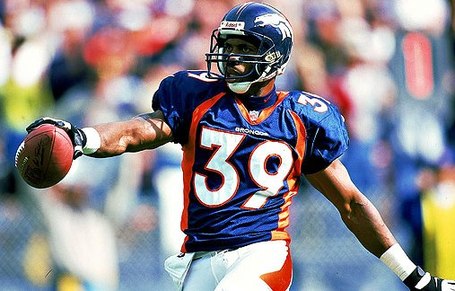