Share All sharing options for: Denver Bronco Greats... By the Numbers: #40

The #40 for the Broncos is an ominous and loaded number. Of the sixteen people who have worn it, fifteen haven't lasted more than two seasons with the club. It's because this number is so lopsided from the standpoint of player longevity (or lack thereof) that I've decided to have a little fun with this. I'm hopeful that from this point forward, any future player who knowingly requests #40 should be shown this list and be given the opportunity to re-pick their number. It's only fair.

Though Cox played in thirty-six games while with Denver, Cox only started in five. The highlights were few; a couple interceptions and a fumble recovery.

Shoate was drafted by the Broncos in the 5th round of the 2004 draft. He appeared in seven games and notched zero stats. With indispensability like this, Mike Shannahan brought him back the following year where he was injured for the 2005 season. He was then signed to the practice squad for 2006 and was released in 2007.

Dale Carter. Where to begin? Dale Carter. Dale Lavelle Carter. In 1999, the Broncos signed Carter to a contract that made him the highest-paid corner in the league ($22.8 Million over four years). Carter would go on to have two interceptions over fourteen games. With such a fantastic showing in the Mile High City, he went out and got himself suspended for violating the league’s substance abuse policy during the 2000 offseason. Carter was then quickly released from his insane contract. To put it nicely, Carter fell well short of expectations. To put it meanly, he’s regarded as quite possibly the worst free agent acquisition in recent club history.

Darryl Hall got an interception once. Other than that, he’s best known for being mistaken as half of the hit 1970’s band Hall & Oates. To be clear, Darryl Hall had nothing to do with the hit single "Maneater".

Martin was twenty-three years old when he started one game for the Broncos. That’s not interesting or special, but neither was Martin.

The most notable thing about West was that he had one punt return for -1 yards. Not bad for a guy who started seven games. Dale Carter ain’t looking so bad now, is he?

I’m sure Randy was pretty stoked that he not only got a free jersey, but that he also had the opportunity to most likely (this is unconfirmed, now) meet Craig Morton. He played in zero games.

Gehrke started ten games and recovered two fumbles. This wouldn’t be very notable except for the fact that he was a Wide Receiver. He appears to be unrelated to former Broncos GM Fred Gehrke (1977-1981).

Grady didn’t actually fare that poorly. He started all fourteen games of the 1969 season and had two interceptions and two fumble recoveries. The following year he would be a kick returner for Atlanta.

Ron wore #40 and fumbled the ball once. He started three times.

McCarthy played in eight games and started five. He had two receiving touchdowns.

The "greatest" Broncos to actually sign with the club following the 1961 draft … Evans amassed zero stats in five games and would (I'm guessing here) be constantly mistaken for Roy Roger's wife, the popular singing cowgirl of the same name.

Wow! A Hall & Oates and a Dale Evans joke in the same article? You all are truly lucky Bronco fans.

Al Carmichael is best known for catching a 59-yard pass from Frank Tripucka on September 9, 1960. It was the not only the first touchdown in Broncos history, but because the game was played on a Thursday, it was also the first American Football League touchdown ever.

Ted made the team without ever playing football in college. How do I know that? His school is listed as "none".

Between all these one and two year wonders (and you Curome Cox) it is indeed difficult to choose who the best Denver Bronco to wear #40 was. As it has been mentioned many times, being the "Greatest Bronco" isn’t so much about stats (don’t get your hopes up Dale Carter), but rather about impact on the franchise (sit down Dale Carter). Being the first to do anything for a team is no small matter, but to be the first for a young football league; that’s something that transcends the short time that this player was a Bronco. It’s for this reason that I hereby deem…. 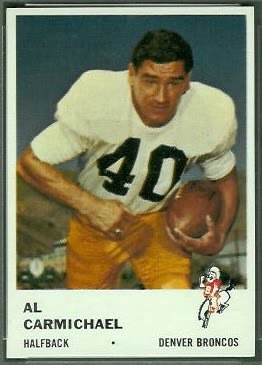