Denver Broncos Greats... By The Numbers: #41

Share All sharing options for: Denver Broncos Greats... By The Numbers: #41

There are eleven players who have worn #41 for the Denver Broncos. For younger fans, like myself, the first thing that jumps off the screen is the position of Eric Crabtree and Jerry Tarr. FL means flanker and E means end. Today, the flanker is affectionately labeled the slot receiver. An end is exactly what it is today. However, in the past, Jerry Tarr wasn't called a defensive end or a tight end. He was only called an end because he played both the defensive end and tight end positions. Before writing this article and searching google, I didn't know that.

Here's the list of all eleven players who have worn #41 for the Denver Broncos:

Karl Paymah was drafted in the third round (76th overall) of the 2005 NFL Draft by the Denver Broncos. He played 4 years with the Broncos and notched 101 tackles and 3 INTs. After being released following the 2008 season, he was picked up by the Minnesota Vikings. In 2010, he was signed by the 49ers and never played a down with them. He was released in September of 2010 and was picked up by the Houston Texans who ended the year ranked 32nd against the pass.
Johnathan Reese was a runningback out of Columbia (the Ivy League college, not the country) who bounced around the NFL for a few years before ending his career with the Denver Broncos. He broke just about every Columbia record, rushing for 1,330 yards and 18 TDs while also posting an impressive 36.8 yard average on kickoff returns.

Deon Strother was a RB out of USC. He appeared in 2 games for the Broncos, but posted no statistics. 1994 was his only year in the NFL.

Greg Lewis was drafted by the Denver Broncos in the 5th round (115th overall) of the 1991 NFL Draft after an impressive college career in Washington. He played two seasons for the Denver Broncos, appearing in all 32 games and starting six of them. He rushed 172 times for 644 yards, a 3.7 average and 8 touchdowns. He also caught 6 passes for 39 yards and returned a kickoff for 20 yards. If you're thinking to yourself "he played two seasons, but at the top of the article he is listed only for 1991". The reason is because he switched numbers. You may remember him from "Denver Broncos Greats... By The Numbers: #20".

Jerry Tarr was drafted in the 17th round of the 1962 AFL Draft. He had 8 receptions for 211 yards and 2 touchdowns in his only NFL season.

Bob McNamara played 2 seasons for the Denver Broncos and had 7 interceptions for 143 yards and a defensive touchdown. 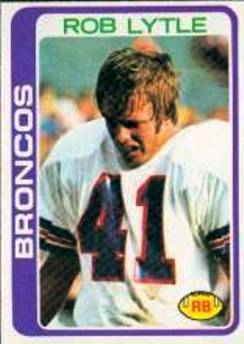 All of us at MHR would like to extend a Mile High Salute to Rob Lytle for being the greatest Bronco to wear #41.
Go Broncos!