Share All sharing options for: Broncos Greats... By The Numbers: #49

Of all the "Broncos Greats" that we have done, choosing the greatest Bronco to wear #49 is by far one of the easiest. There are just five players in Denver Broncos history that have worn #49 and but only one lasted more than one year. See if you can guess who’s going to receive the honor today. 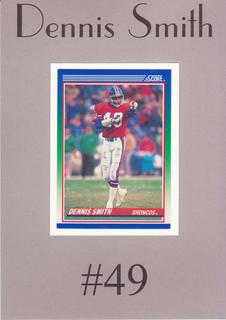 Dennis Smith was drafted by the Denver Broncos in the 1st round (15th overall) in the 1981 draft. MHR’s Guru John Bena said it best in this 2009 article:

He was also named the club's Most Inspirational Player in 1992. Smith ranks fourth all- time in games played by a Bronco (184), fifth in games started (170) and sixth in both career interceptions (30) and interception return yards (431).

He is one of just three players in the history of the Broncos franchise to play at least 14 seasons with the club, behind John Elway (16) and tied with Tom Jackson. Smith's career totals include 1,171 tackles (794) and 14 sacks. He posted a career- high five sacks in 1983, a career- high five interceptions in '91 and a career- high 120 tackles in '92.

Perhaps my greatest memories of Smith are in regards to the way he passed the torch to another hard-hitting safety - Steve Atwater. That type of leadership has been a huge void for the Broncos and remembering players like Smith remind us all just how great the Broncos Greats truly are.

In 2001 Smith was inducted into the Denver Broncos Ring of Fame. In 2006 he was welcomed into the Colorado Sports Hall of Fame. He's ranked 4th all-time for total games played with the franchise with 184. The amount of passion Smith brought to the game can’t be underestimated. In week one of the 1986 season at home against the Raiders, Smith played with a broken bone in his shoulder (kind of puts the 2010 NFC Championship in perspective... ahem).

Something tells me the tradition of the tough no-nonsense hard-hitting Safety may be returning to Denver. Let’s hope Mr. Elway shows this video of Smith to our newly drafted Safeties (caution for language).

Okay, that wasn’t Smith. However, the description is dead-on. Make no mistake, Dennis Smith was the Honey Badger of the Denver Defense for many great years.

Matt Dominguez appeared in 12 games in 2001 and had three catches for 26 yards.

Alvin Mitchell played in 2 games for the Broncos and started in one of them. He notched zero stats.

Neal Sweeny played in 10 games and had six catches for 136 yards.

Glenn Glass played in six games but had nothing to show for it.

Okay now seriously, here’s a video of Dennis Smith for your viewing pleasure.

A Mile High Salute to Dennis Smith, the Greatest Bronco to wear #49!