Share All sharing options for: Denver Broncos Greats . . . By The Numbers: #50

This is . . . mmmmm . . . an . . . "unusual" group. Thirteen players. Forty-three years. One Texas judge. Only three were drafted by the Broncos. Three were college free agents. Two came to Denver to play their last season. Two played their last -- and their only -- season with the Broncos. Five played less than a full season. One played in two of Denver's Super Bowls.

Let's take a jump and meet the men behind the #50.

Fred Broussard C 1960
Was drafted in 1955 in the 4th round by the Pittsburgh Steelers. In the following six years, Fred played exactly eight games in three seasons, the final season and game in Denver where was active for just one game.

Pat Lamberti Jr. E 1961
Was drafted 146th overall in the 1959 draft by the Chicago Cardinals. Pat never played for them, instead choosing to wait two years so he could jump into the fledgling AFL in 1961, where he played twelve games for two teams without starting a game. In his seven games with Denver he intercepted one pass and ran five yards with it.

Jerry Hopkins LB 1963-66
Was drafted by the Houston Oilers in the 4th round of the 1963 draft. Never played for them, instead spent the next four seasons in Denver. He appeared in forty-nine games, but never started. He intercepted six passes which he returned for a combined 48 yards. He rated two lines in wikipedia.

Carl Cunningham LB 1967-70
Was the first of this group to actually be drafted by the Broncos (85th overall in 1967). He played 55 games in 4 seasons for Denver with 42 starts. He intercepted 4 passes and returned them for a combined 29 yards. He recovered 2 fumbles.

Olen Underwood LB 1971
Was drafted in the 14th round of the 1965 draft by the New York Giants. He played his final season in Denver, appearing in 14 games with 4 starts. Matched the efforts of Pat Lamberti from a decade earlier by intercepting 1 pass and running 5 yards with it.

In 1980 he took the bench of the 284th District Court for the State of Texas, and held that elected position until retiring in 2005. In 1996, he was appointed by then Governor George W. Bush to be the presiding judge of the Second Administrative Judicial Region of Texas. Underwood's daughter, Nancilea Underwood Foster, competed in diving at the 2008 Summer Olympics.

Bobby Maples C 1972-78
Was drafted by both the Houston Oilers (26th overall of the AFL draft) and the Cleveland Browns (41st overall of the NFL draft) in 1965. Played the last 7 years of his 14-year career in Denver. He was active in 98 games with 61 starts. He recovered two fumbles behind the line of scrimmage for a combined loss of 18 yards. He returned 1 kick for 15 yards. He was a backup on the roster for Super Bowl XII.

Jim Ryan LB 1979-88
Was a college free agent who spent his entire 10-year career in Denver. He appeared in 150 games with 91 starts. He recorded 10 sacks in his final 5 years. He intercepted 5 passes and returned them for a combined 41 yards. He recovered 7 fumbles. He returned 5 kicks for 11 yards, the longest return of which was 9 yards. He recorded 1 safety. He played in Super Bowls XXI and XXII. He was a volunteer defensive assistant for the Broncos in 2004 and was hired as a full-time defensive assistant in 2005. He worked as an offensive assistant in 2006 then became the linebackers coach from 2007-08. He is currently on the Houston Texans coaching staff.

John Sullins LB 1992
Was a college free agent who spent his entire 6-game career with the Broncos. He never started and did not even merit a wikipedia mention.

Ray Jacobs LB 1994-95
Another college free agent, Ray played in 31 games but never started. He recovered 1 fumble. He is not to be confused with Herschel Ray Jacobs who played DT/DE for the Broncos from 1963-1966.

Jon Hesse LB 1997
Was drafted in the 7th round of the 1997 draft by the Jacksonville Jaguars. He never played for them. He was listed in the 2010 Denver Broncos Media Guide, most likely due to having been listed on the roster from Super Bowl XXXII. He recorded no stats. He played 5 games for St. Louis in 1998.

Artie Ulmer LB 1999
Was drafted 220th overall in the 1997 draft by the Minnesota Vikings. He never played for them. He played seven games for Denver in 1999. He recorded no stats for the Broncos.

Ben Hamilton G/C 2001-09
Was drafted in the 4th round of the 2001 draft by the Broncos. He played 118 games with 110 starts. He recovered two fumbles. He was part of the 2005 AFC West division winning team. He was a durable, dependable player who did not miss any snaps between 2002 and 2006, compiling a streak of 5,407 consecutive snaps during the regular season. He helped the Broncos offense place second in the NFL in rushing yards and fourth in fewest sacks allowed in teh 2002-2007 seasons. He was sidelined by a concussion in 2007, and though he played through 2009 with Denver, he signed as a free agent with the Seattle Seahawks. After being placed on injured reserve by the Seahawks, Hamilton retired in 2010.

J.D. Walton C 2010-Present
Was drafted in the 3rd round of the 2010 draft by the Broncos. He stared all sixteen games of 2010. In a November 2010 game versus Kansas City was part of an offensive line that didn't give up a single sack and opened the path for Denver's first 100-yard individual rushing performance. He made his first career tackle while on special teams, helping Britton Colquitt make a touchdown-saving tackle after a missed field goal.

I was tempted to suggest that the greatest to wear #50 should be either Olen Underwood or Artie Ulmer, just for their names alone. When all was said and done, however, I simply had to go with the player who had the most games, starts, sacks and even volunteered to be a coach before he ever knew he was going to be hired as one.

The Greatest to Wear #50
Jim Ryan 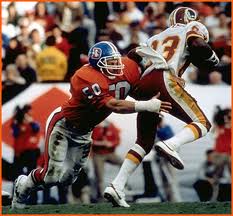