Share All sharing options for: Denver Broncos Greats . . . By The Numbers: #35

This has been one of the less favorite numbers among Broncos players -- having been worn by just fourteen players for just over half of the years that there has been professional football in Denver (28 out of 51 seasons). Number 35 has been worn by three fullbacks, seven running backs and four defensive backs, virtually none of whom are well known players.

After the jump: A look at the players who have worn #35

Jason Suttle CB 1999-2000
Appeared in 10 games with 0 starts; recovered 1 fumble and returned it for a touchdown; recorded 2 tackles.

Lenny Walls CB 2002-05
Appeared in 43 games with 20 starts; intercepted 1 pass; defensed 21 passes; forced 2 fumbles; recovered 2 fumbles; recorded 90 tackles; was an undrafted college free agent; was the tallest CB in the NFL at the time of his signing; was placed on IR in November of 2005 and did not play for the Broncos again.

Selvin Young RB 2007-08
Appeared in 23 games with 13 starts; rushed 201 times for 1032 yards and 2 touchdowns; caught 38 passes for 247 yards; fumble 3 times and recovered; returned 11 kicks for 232 yards; was an undrafted college free agent; rushed for 120 yards in his first NFL start; after a fantastic start, he missed 7 games due to a groin injury; he returned for one game but suffered a neck injury; he was waived in 2009 after the Broncos signed LaMont Jordan, Correll Buckhalter, J. J. Arrington and drafted Knowshon Moreno.

Picking the "greatest" Bronco to wear #35 was a tough job, given the relative obscurity of these players. It would have been easy to go with a recent fan favorite in Selvin Young for his initial promise. It would have also been easy to go with Lonnie Perrin for being the first player to wear #35 for the Broncos in a Super Bowl (SB XII), or with Lenny Walls as being one of the best known names in the group.

But, I believe we cannot discount the player who tied for wearing that number the longest (4 seasons), appeared in the most games (59) and was a contributor to three trips to the Super Bowl (SB XXI, SB XXII and SB XXIV). So . . . .

The Greatest Bronco to Wear #35: 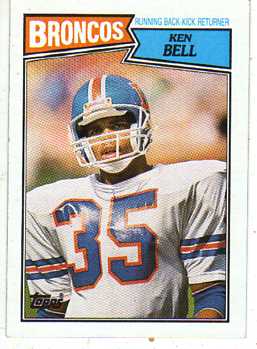