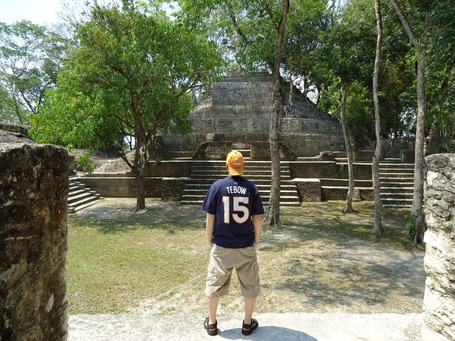 With the lockout turning weeks into months, 2012 is closer than you might think. For those of you who stay away from doomsday conspiracy theories, there is a belief among (too many) people that that because the Mayan calendar (first conceived more than 5,000 years ago) lists no dates following December 21, 2012; that it can't mean anything other than the end of the world as we know it.

I just returned from the ancient Mayan cities of  Xunantunich and Cahal Pech in rural Belize.   What could we Bronco fans learn from the ancient Mayans?    Did I find proof of the end of the world? What I found out may surprise you. What I make up may amaze you!  Stick with me after the jump to find out what I'm blathering about. 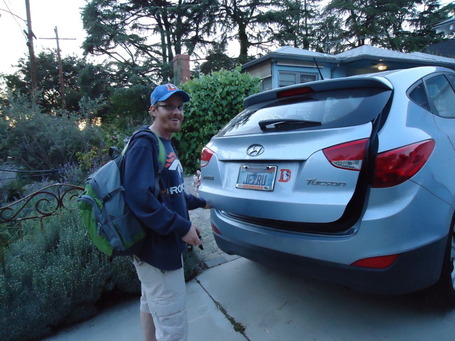 When I left California, I was excited that I would be able to prove this doomsday theory as the bunch of hooey that I suspected it to be.  Well, that and the Broncos had just drafted Von Miller, Rahim Moore, Orlando Franklin and Nate Irving. So I may have been more than a little excited about that... Anyways, I was feeling content that the Broncos had done well enough in the first two days of the draft and was confident that my international departure wouldn't adversely impact the draft on the final day (good job on that by the way).  Elway, Fox and Xanders clearly didn't need (nor asked for) my help, but then I am unlisted.

It turns out that among the two sets of ruins in rural Belize, both locations were outfitted with ball courts that at one time had been the focus of ancient Mayan athletic competitions. The game was played on a long rectangular field with goals at both ends. Here's a picture.

To have built such stadia at both locations, the ancient Mayans clearly loved their rectangular-field game very much. This got me thinking... Could these people who inexplicably abandoned their cities, provide some insight into the current state of affairs in the NFL?  I can rarely stand and think at the same time so I sat down in what would have been primo seats in their heyday (also it was hot and I had skinned my knee navigating the trail). 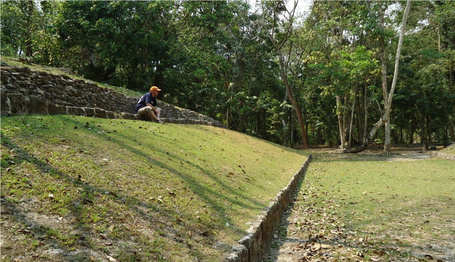 Here was a field of former sports glory totally empty.  There were no practices, no meetings, no openings of new temples with the ancient Mayan mascots, there were no fans - there was nothing.  Just me anxiously waiting for something to happen... and it never did (there wasn't even a guy selling peanuts).

Was it possible that the end of the civilization of the ancient Mayans wasn't the cause of the game vanishing, but rather the other way around?  Looking at the investment of effort it took to build this rectangular field, there had to be some sort of monetary interest in playing this game (someone had to sell and buy the peanuts). Without the economic drive of sport, it's my best uneducated and wholly tongue in cheek guess that the civilizations of Xunantunich and Cahal Pech were abandoned because there was a sports labor dispute and subsequent lockout.

It's my belief that the ancient Mayans foretold the NFL lockout of 2011(and maybe 2012??? HMMMMM?) within their calendar and stopped listing days as a dire warning to us.  A warning that if there is no football, we could as well run the risk of decline. Think about it this way (and no other so that you'll agree with me), without all the beer money, the sports package revenue and merchandise sales, our economy could take a massive hit. Our stadium, like the one above, could be totally empty come fall.

Though it kind of depressing to think about, there is hope.

As I sat there in the empty stadium of yore, I had was overcome with a vision (possibly due to dehydration because I was clearly violating my otherwise sedentary lifestyle).  That vision was of a man, a singular hope to lead the NFL out of this mess.  A man that could put the burden of modern civilization upon his back and carry us to awesome town. That man? 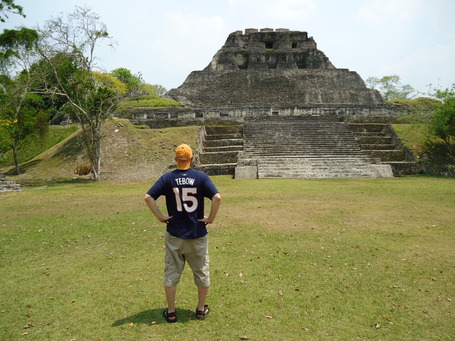 Now, of course I don't have any evidence that the ancient Mayans endorsed Tebow as the starter for 2011, but come on...  It's Tim Tebow.  If we could show them some video of the Houston game they'd be down with #15 for sure. Would you bet against him?

So it's without any facts or proof that I can proudly proclaim that the ancient Mayans endorse Tim Tebow as the starter for the Denver Broncos. They um... also said that Orton would look great in Cardinal red.  Oh, and seriously guys, time to end this lockout/labor/owner shenanigans.

There might be a few of you who are offended that I'm making light of a serious apocalypse type prediction.  To you I offer the following excerpt from wikipedia on the ancient Mayan doomsday scenario:

Mayan elder Apolinario Chile Pixtun and Mexican archaeologist Guillermo Bernal both note that "apocalypse" is a Western concept that has little or nothing to do with Mayan beliefs. Bernal believes that such ideas have been foisted on the Maya by Westerners because their own myths are "exhausted". Mayan archaeologist Jose Huchm has stated that "If I went to some Mayan-speaking communities and asked people what is going to happen in 2012, they wouldn't have any idea. That the world is going to end? They wouldn't believe you. We have real concerns these days, like rain"... Most classic Maya inscriptions are strictly historical and do not make any prophetic declarations.

I beg to differ.  The awesome "myth" of Tim Tebow is still being written.