Share All sharing options for: Broncos Greats . . . By The Numbers: #37

Few numbers have been as unpopular for Broncos players as #37. This number has only been worn for 39% of the club's history. Not only has it not been worn for very many years, the seven defensive backs and four running backs who wore it, with one or two exceptions, were not particularly notable players.

Cecil Sapp RB 2003-07
Appeared in 49 games with 9 starts; rushed 49 times for 223 yards and 2 touchdowns; caught 24 passes for 102 yards and 1 touchdown; never fumbled the ball but did recover 3 fumbles; returned 9 kicks for 187 yards; was signed as an undrafted college free agent.

Alex Haynes RB 2008
Never appeared in any games for the Broncos; recorded no official statistics.


Although a poll will follow this article, there is really only one choice for the title:

The Greatest Bronco to Wear #37 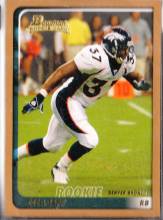