Share All sharing options for: Denver Broncos Greats . . . By the Numbers: #71

What do you call it when eleven players -- six offensive tackles, two offensive linemen, one guard, one tight end and one nose tackle -- each wear a given number in thirty-two seasons, but two of them account for eighteen of those seasons and two of them wore it in the same year?

Take a jump with me and meet this group of Broncos.

Willie Smith G 1960
Drafted by the Bears in the 8th round (94th overall) of the 1959 NFL Draft. There is no evidence that he ever played for the Bears. He appeared in 14 games with 0 starts for Denver.

Art Hauser T 1961
Drafted by the Rams in the 5th round (58th overall) of the 1954 NFL Draft. He played for the Rams, Giants, Cardinals and Patriots before coming to Denver. He appeared in 14 games with 0 starts for the Broncos. Since his retirement, he has been an NFL scout, a teacher and a successful business man.

Claudie Minor T 1974-82
Drafted by the Broncos in the 3rd round (68th overall) of the 1974 NFL Draft. He appeared in 125 games with 123 starts. He was a starter in 1 wildcard playoff game, 2 divisional playoff games, 1 AFC Championship game and in Super Bowl XII.

Jack Peavey OL 1987
Undrafted player. He appeared in 3 games wtih 1 start. Both Peavey and Greg Kragen are listed as having worn #71 in 1987, but I was not able to find a definitive explanation for this. Kragen only appeared in 12 games in that season, so it may be speculated that he was placed on injured reserve and replaced by Peavey.

Blake Brockermeyer T 2002-03
Drafted by the Panthers in the 1st round (29th overall) of the 1995 NFL Draft. He played for the Panthers and the Bears before coming to the Broncos. He appeared in 32 games with 3 starts for Denver. A native of Fort Worth, Texas, he became an assistant football coach at a Fort Worth high school after his retirement from the NFL.

Chad Mustard TE/T 2007
Undrafted player. He played for the Browns before coming to Denver. He appeared in 32 games with 6 starts for the Broncos. He caught 7 passes for 85 yards. He returned 2 kicks for 19 yards.

Russ Hochstein OL 2009-2010
Drafted by the Buccaneers in the 5th round (151st overall) of the 2001 NFL Draft. He played for the Buccaneers and Patriots before coming to Denver. He came to the Broncos in exchange for a 7th round draft pick. The draft pick, interestingly enough had come to Denver as part of a different trade which also brought LeKevin Smith to Denver. He appeared in 31 games with 16 starts for the Broncos. He recorded 3 tackles. He returned 1 kick for 6 yards.


While all of these men have contributed to the history of the Broncos, there are only two men who merit consideration for the title of Greatest to Wear #71. One was drafted, one was undrafted. Both appeared in over 100 games and both had over 100 starts. Both own Super Bowl appearances. The nod, however, must go to the player who was a starter in 5 playoff games, 4 AFC Championship games and 3 Super Bowls:
The Greatest to Wear #71 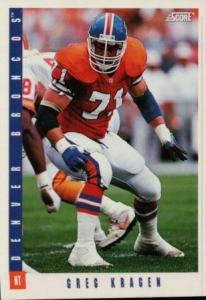