Orton works with Fitzgerald in Minnesota

Share All sharing options for: Orton works with Fitzgerald in Minnesota

At some point in March, somewhere in the distance Kyle Orton could be heard shouting about being traded to Minnesota (allegedly). 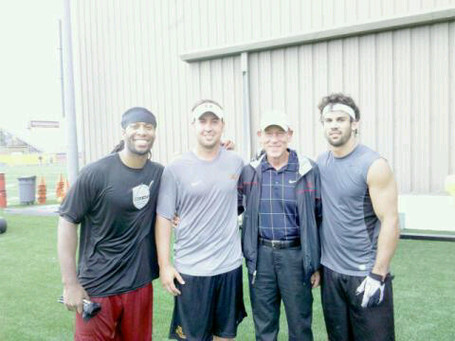 Today we have a tweet (and a picture) via Arizona (also a proposed landing spot for Orton if he were to be traded) Cardinals' wide receiver Larry Fitzgerald of Orton, Fitzgerald and Eric Decker (and Orton's father) post workout in of all places Minnesota.

Is there much to read into this?

Of course there is/isn't. Orton, if traded has been most reportedly sought after in Arizona (who is also apparently very interested in the Philadelphia Eagles' backup quarterback Kevin Kolb), he's also been talked about in Minnesota, Miami and several other locations.

So what is to be read into all of this?

Much ado about something...To me anyway.

Sure, Decker is present, but he and Fitzgerald are the only ones that make sense at the workout. Decker worked out with Fitzgerald last season and both are Minnesota natives. Orton is from Iowa and played for Purdue, sure he may have grown close to Decker, but certainly not closer than any other receiver on the Broncos' roster.

This is how it starts...

UPDATE (11:30 EST 6/17/2011): Completely forgot to mention that Demaryius Thomas is also in Minnesota, not that he's with these three, just an interesting thought. Orton possibly putting in work with the two youngest Broncos wide receivers would be a smart move.

As Fitzgerald attempted to point out (via retweet) he and Orton have known each other since Nike Camp. Yet, as we know (or have come to learn) where there is orange there is fire, what do you think Broncos Country?