Share All sharing options for: Denver Broncos Greats . . . By The Numbers: #61

An interesting mix here: #61 was worn in twenty-eight out of fifty-one seasons by ten players -- five defensive linemen and five offensive linemen -- three undrafted players, three drafted by other teams and four drafted by the Broncos.

Let's take a jump and learn a little bit about these ten players.

Charles Gavin DE 1960-63
Undrafted player. He appeared in 47 games with 0 starts. As a defensive end, he intercepted 1 pass which he returned for 35 yards. He is also credited with scoring a touchdown off either a blocked kick or missed field goal (pro-football-reference.com did not define this more clearly).

Bill Keating DT 1966-67
Undrafted player. He appeared in 20 games with 0 starts. He was so impressive that he failed to warrant even a mention in wikipedia.

Bob Vaughn G 1968
Drafted by the Broncos in the 3rd round (75th overall) of the 1968 Draft. He was even less impressive than Bill Keating, having appeared in only 1 game.

Tom Lyons G 1971-76
Drafted by the Broncos in the 14th round (350th overall) of the 1971 Draft. He appeared in 73 games with 62 starts -- at one point starting 43 consecutive games. He caught 1 pass for -1 yard. He recovered 1 fumble. While playing with the Broncos, he was once a guest conductor for the Denver Symphony Orchestra. After retirement, he attended the University of Colorado Medical School and established a practice as a medical doctor in Atlanta. According to one source, he played the voice of Francis McReary in the video game Grand Theft Auto IV.

Andre Townsend DE 1984-90
Drafted by the Broncos in the 2nd round (46th overall) of the 1984 Draft. He appeared in 104 games with 54 starts. He recorded 22 sacks. He recovered 6 fumbles and returned 1 for a touchdown. He was a starter in both Super Bowl XXI and XXII.

Eric Floyd G 1995
Undrafted player. He played five years for San Diego, Philadelphia and Arizona before joining the Broncos in 1995. He did not appear in any games for Denver.

Ellis Johnson DT 2004
Drafted by the Colts in the 1st round (15th overall) of the 1995 Draft. He played for Indianapolis and Atlanta before joining Denver in 2004. He appeared in 13 games with 0 starts for the Broncos. He recorded 3 sacks. He intercepted 1 pass which he returned 32 yards for a touchdown. He defensed 1 pass. He recorded 15 tackles and 1 assist.

Gerard Warren DT 2005-06
Drafted by the Browns in the 1st round (3rd overall) of the 2001 Draft. He played in Cleveland for 4 years before joining the Broncos in 2005. Denver acquired him by trading a 4th round pick to the Browns. He was part of a series of acquisitions which brought 3 other Cleveland defensive linemen to Denver and led to the Broncos' defensive line being nicknamed the "Browncos." While in Denver he started all 31 games in which he appeared. He logged 5.5 sacks and defensed 1 pass. He forced 1 fumble. He recorded 36 tackles and 12 assists. He was traded in August of 2007 to Oakland for a conditional 5th round draft pick in the 2008 Draft.

I was tempted to suggest that we should pick Tom Lyons as the greatest given the fact that he started 85% of the games in which he appeared, the fact that he was a guest conductor, a medical doctor and a video game voice-over actor. But I decided that it would be more appropriate to go with the player who was a 2nd round draft pick, recorded 22 sacks, returned a fumble for a touchdown and was a two-time starter in Super Bowls:
The Greatest to Wear #61 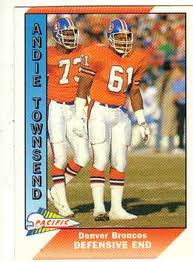