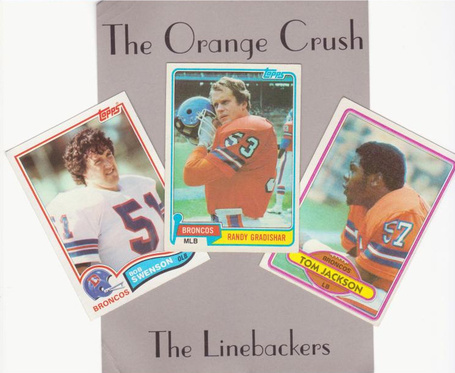 Some of you who are paying moderate attention to NFL headlines may have noticed a small story that came out of Detroit. With nothing better to do during the lockout, Lions head coach Jim Schwartz turned to twitter to ask for help in naming the defensive line now consisting of Ndamukong Suh, Kyle Vanden Bosch and Nick Fairley. To quote the article:

Lions coach Jim Schwartz picked "Silver Crush" as his favorite on his Twitter account Wednesday because it acknowledges the history of the franchise's front four known as the "Silver Rush," in the early 1980s.

Follow me after the jump where I declare shenanigans on this blatant "borrowing" of our hallowed nickname.

Where to begin? Let's start with the original issue. The Orange Crush Defense. To quote wikipedia:

Orange Crush Defense was the 3-4 defense of the Denver Broncos during the 1970s...

It was one of the top defenses of its time with linebackers Randy Gradishar and Tom Jackson, with Gradishar as a potential Hall of Famer. Other key Crushers were defensive linemen Barney Chavous, Lyle Alzado, and Rubin Carter, linebackers Bob Swenson and Joe Rizzo, and defensive backs Billy Thompson and Louis Wright.

In their Super Bowl XII season in 1977, The Crush had the NFL's number-one defense against the rush though the Broncos were 27th out of 28 teams against the pass.

The team derived their name from their orange, blue and white uniforms and a popular soft drink, Orange Crush.

The Orange Crush was an amazing phenomenon onto itself in Denver Broncos history. Not only was Denver Bronco crazy, but anything with "Crush" on it became a valued commodity. The Crush bottling company even went so far as to issue Denver Broncos themed bottles and cans (that can be viewed here and here). Even trainer Steve Antonopulos got his face on a can! During the Broncos first Super Bowl run in 1977 anything Broncos or Crush related - wholly synonymous with one another - was flying off the shelves. Needless to say, anything with Orange Crush on it became part of Denver Bronco legend (for more on that here's Tim Lynch's article on Broncomania featuring a guy in a sweet Orange Crush hat). Here's an prime example from my own t-shirt collection: 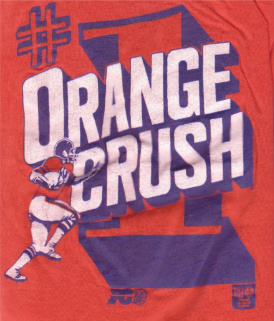 If you google "List of NFL Nicknames" you'll find a wikipedia page that lists the most notable ones. Upon closer inspection of that list, I noticed that there is no mention of this "Silver Rush" that Schwartz mentioned. So I googled it and other than the Jim's Schwartz's recent remarks referencing it, "Silver Rush" doesn't appear on the first five pages of search results (probably more, I stopped looking at five).

The Detroit Lions (established in 1929 as the Portsmouth Spartans) have their own impressive history to draw nicknames from without thoughtlessly co-opting ours. Let's not even get into the fact that Denver's former Arena Football team that John Elway founded with Pat Bowlen was called "The Crush" (for obvious reasons). Let's look past the current Broncos marketing effort - a club designed to raise female interest in the game called "Crush". Let's not even get into the fact that this ubiquitous "Silver Rush" of the 1980's was clearly concieved after the Orange Crush name had long been existence (since the late 70's). Seriously, without Orange Crush does Silver Rush even make any sense? Okay, maybe from a mining standpoint... Two things Detroit is known for - mining and great defense. Were there no car or motown metaphors readily available?

Frankly, it's just rude to borrow someone else's moniker like that. Adding Von Miller to the Elvis Dumervil threat doesn't suddenly make the VonDoomsday Defense okay. Nor can we become the Orange People Eaters. No matter how much we want to, we can't be the Gold Curtain (like what I did there in tying in the throwback colors?). Once a term like the "Orange Crush" has been claimed, you can't just run out call it yours. What gives Detroit?