Some Clarification is in Order: The Passing Game & NFL Trends

Share All sharing options for: Some Clarification is in Order: The Passing Game & NFL Trends

So one thing that is often talked about by fans across the NFL is trends, becoming a more pass happy league, a QB driven league, weakening of the running game. Well I have always heard of these trends, and seen basic data proving or disproving them, but I wanted to take a deeper look myself at what's trending across the NFL.

So with this goal in mind, I set out to look at offensive, defensive and special teams, and how they've changed as time has passed. Now I was planning on doing this in one post, but there was so much to write, I decided to break it down into separate posts reviewing offensive trends, passing and rushing, and defensive trends, and a final post with special teams with a conclusion piece which will give a brief summery of all that I found. So there will be a total of four articles.

So with that in mind, today we will be looking at the NFL passing game and how it has changed over the years in a number of areas, that will hopefully give us a better idea of what direction the NFL is headed in. I realize this is pretty table and data heavy, so I wish any and all who enter good luck, God speed, and hopefully we'll see you at the end.

So I set out to look at the modern NFL and how it has changed. To do this, I looked at the NFL's full history as well as considered when new offenses became popular and when rule changes came into play, and I decided on 1978, which was the beginning of a number of major rule changes in the NFL, as well the starting point for many great quarterbacks, and this is also the time many refer to as the beginning of the age of the quarterback. So with that in mind, I looked at every year from 1978 to 2010. A few key years to note would be 1982, which was shortened to nine games. In 1995 the NFL went from 28 teams to 30 teams by adding the Carolina Panthers and the Jacksonville Jaguars. In 1999 the Cleveland Browns returned, and in 2002 the Houston Texans joined the league, leaving us at our current 32 teams.

So let's look at what I sought out to define some NFL trends. Now please remember, I didn't look at every aspect of the NFL offense, nor do I plan on making any sweeping predictions. I also won't delve too deeply into why these trends are happening. I set out to look at the NFL offense in general, and see if I could find any trends. So to begin, I broke the offense into it's two parts, the passing and running game, the running game will be covered in the next article.

For the passing game I looked at yards per attempt (YPA), which would help us see if the NFL is becoming a more down field league. I looked at completion percentage (Comp. %) as well as average passing yards per team in a season. Both of these would help us see if passing is becoming more effective. I also looked at yards after the catch (YAC), but since I was only able to find data for 2001 to 2010 it isn't as big a sample size.

So with those parameters set, lets get to the data.

So I know tables are the most enjoyable to read, here's the data in table form, which is a bit easier on the eyes, and it's also easier to see trends. 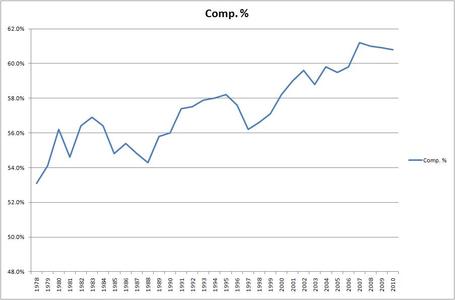 So looking at this, it's obvious that the quarterbacks in the NFL are becoming more and more accurate as time passes. This, at least in part, is due to major changes in terms of contact between wide receiver and defensive backs, and could also be due, in part, to what we found in the next table. 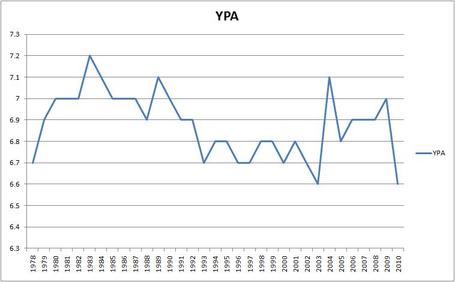 Now this was a very interesting find for me, that while it has been up and down over the years, the NFL in general is moving towards shorter passes. Which would account for why quarterbacks are more accurate. This was a shocking thing to me because it always seemed, and I've always been told by the media, that the NFL is becoming a down field game, longer passes were becoming more important, but it seems that's not entirely true. Just looking at the data broken in half, the first half averaged just over 7 YPA, while the second half averaged just below 6.8 YPA.

Yards After the Catch 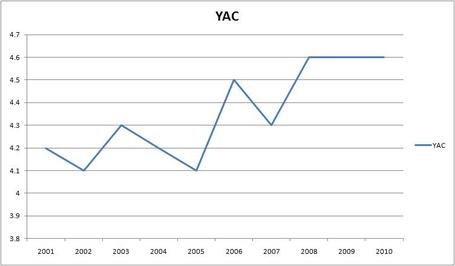 This also was interesting to me, showing a change in how teams run their passing games, moving from the deep passes of the 1980's and early 1990's, to shorter passes to receivers who are more likely to make plays after the catch. Just a note that I found interesting, the average height of a NFL wide receiver has increased rapidly since the early 1990's, being about two inches taller now then they were in 1978. 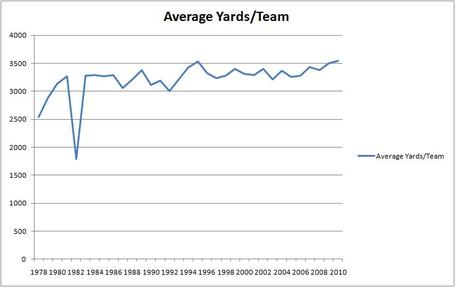 So this is where the trend really is manifested. With all the talk of the NFL being a passing league, I expected a much greater increase in yardage, but it was much more subtle then many people talk about. But it is true, that since 1978, NFL teams averages more passing yards per season, up from 3080 in the first half to 3356 in the second half.

So to conclude this segment, some of the interesting trends in relation to the passing game in the NFL were how yards per attempt were going down and yards after the catch were increasing. These two factors to me were fascinating to me because it shows the growing role of the slot receiver and the increasing size of receivers, and how they are being used by offensive systems in the NFL. So next time we will study the running game and it's trends. As I said before, there are a number of other areas in relation to the passing game that I didn't cover yet, and I did that for a purpose, they will be covered in the following articles and the summery, so don't worry, I didn't exclude things because of laziness.

Now I won't make any real predictions here, I'm not sure I can, but I do think we are seeing trends in the NFL, and it will be interesting to see how they continue to develop. Hope this research was useful, and please, feel free to ask questions or point something out, I have a lot more data I didn't include in the post due to time and space constraints, so if you are wondering anything, hopefully I can help.

Next time on Some Clarification is in Order: The Running Game & NFL Trends