Share All sharing options for: Denver Broncos Greats . . . By The Numbers: #81

Number 81 has been worn by nineteen different players in thirty-eight seasons. Eighteen of them were offensive players while one was a defensive end. Eleven of them wore the number for one season or less and only three wore it for more than three seasons. One player -- who wore it briefly -- was recently elected to the NFL's Hall of Fame.

Take a jump and learn who was the best in #81

Dave Washington TE 1968
Undrafted player. He appeared in 2 games with 1 start. He caught 1 pass for 12 yards.

Billy Masters TE 1970-74
Drafted by the Chiefs in the 3rd round (77th overall) of the 1967 NFL Draft. Interestingly enough, he did not play for the Chiefs until 1975 after playing for the Bills and the Broncos. He appeared in 66 games with 29 starts. He caught 66 passes for 923 yards with 6 touchdowns. He rushed 11 times for 47 yards. He fumbled 3 times and recovered 2 fumbles. His career has been compared to that of Daniel Graham.

Bob Adams TE 1975
Undrafted player. He played for the Steelers and the Patriots before coming to Denver. He appeared in 2 games with 0 starts. He did not amass any official statistics.

Shannon Sharpe WR 1990-91
Drafted by the Broncos in the 7th round (192nd overall) of the 1990 NFL Draft. It should be noted that he only wore #81 during his first two seasons. The majority of his accomplishments came while wearing #84. The statistics included in this article are drawn only from those first two seasons. He appeared in 32 games with 11 starts. He caught 29 passes for 421 yards with 2 touchdowns. He rushed 1 time for 15 yards. He fumbled 1 time and recovered 1 fumble. He appeared in two playoff games, catching 6 passes for 60 yards.

Kitrick Taylor WR 1993
Drafted by the Chiefs in the 5th round (128th overall) of the 1987 NFL Draft. He played for the Chiefs, Patriots, Chargers and Packers before coming to Denver. He appeared in 2 games with 0 starts. He caught 1 pass for 28 yards.

Barry Rose WR 1993
Drafted by the Bills in the 10th round (279th overall) of the 1992 NFL Draft. There is no record of him ever playing for Buffalo. He appeared in 3 games for the Broncos with 0 starts. He had no official statistics.

There are really only three players to have worn #81 who merit consideration of the title "Greatest to Wear #81": Billy Masters, Steve Watson and Shannon Sharpe (though Sharpe's claim lies more in what he did wearing #84, than his performance in #81). And so, we find that the best choice to be:

The Greatest to Wear #81 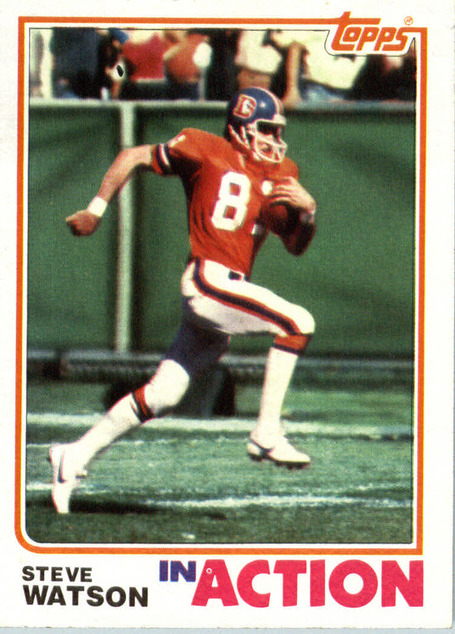