Share All sharing options for: Denver Broncos Greats . . . By the Numbers: #82

This was a number that was worn by twenty different player. It was worn in all but nine of Denver's seasons. It was even worn by two different players in the same season on three different occasions. It was worn by one player who played two positions. Seven of the players were drafted by other teams. Three were undrafted free agents. There was one first round draft pick and five second rounders. Only three players wore #82 for more than three seasons.

Take a jump and meet these men.

Dave Pivec TE 1969
Drafted by the Bears in the 14th round (185th overall) of the 1965 NFL Draft. There is no record of him playing for Chicago, though he did play 3 seasons with the Rams before coming to Denver. He appeared in 14 games with 5 starts. He caught 9 passes for 117 yards.

Otto Stowe WR 1974
Drafted by the Dolphins in the 2nd round (47th overall) of the 1971 NFL Draft. He played for Miami and the Cowboys before coming to Denver. He appeared in 8 games with 0 starts. He caught 2 passes for 9 yards with 1 touchdown. He rushed 1 time for 1 yard.

Jack Dolbin WR 1975-79
Undrafted player. He played semi-pro football and for the Chicago Fire in the World Football League before entering the NFL. He appeared in 62 games with 33 starts. He caught 94 passes for 1576 yards with 7 touchdowns. He rushed 9 times for 89 yards. He fumbled once. He recovered 1 fumble and took it 2 yards for a touchdown. He was a starter in Super Bowl XII. He caught 2 passes for 24 yards in that Super Bowl. He was considered to be one of the most successful players to have made the switch from the WFL to the NFL.

Orlando McDaniel WR 1982
Drafted by the Broncos in the 2nd round (50th overall) of the 1982 NFL Draft. He appeared in 3 games with 0 starts. He recorded no official statistics.

Tony Kimbrough WR 1993
Drafted by the Broncos in the 7th round of the 1993 NFL Draft. He is listed at Pro-football-reference as having worn #80 in 1993 and 1994. There is no record him amassing any official stats while wearing #82.

David Gamble WR 1997
Undrafted player signed by the Eagles in 1994. He did not make the team. He played 2 seasons in the Canadian Football League before getting his chance in the NFL when he signed with the Broncos. He appeared in 2 games with 0 starts. He did not accrue any official statistics. A Wikipedia article article describes him as having been a "significant contributor on special teams" and a "member of the 1998 Super Bowl Championship Team" (that would have been Super Bowl XXXII), in fact the article states that he "went on to win Super Bowl XXXII." Strangely enough neither pro-football-reference nor NFL.com list Gamble on the Super Bowl XXXII roster in any form, nor did he accrue any special teams statistics.

Adrian Madise WR 2003-04
Drafted by the Broncos in the 5th round (158th overall) of the 2003 NFL Draft. He appeared in 11 games (all in 2003) with 0 starts. He returned 5 kicks for 137 yards. He caught 2 passes for 10 yards. He rushed 1 time for 10 yards. He was suspended by the NFL for 4 games in 2004 for taking a supplement with a banned substance in it -- he argued that he had taken a multivitamin upon the advice of his chiropractor. He was excited to return to the Broncos in October of 2004, but never appeared in any more Broncos games.

Stephen Alexander TE 2005-07
Drafted by the Redskins in the 2nd round (48th overall) of the 1998 NFL Draft. He played for the Redskins, Chargers and Lions before coming to Denver. He appeared in 32 games with 29 starts. He caught 39 passes for 330 yards with 3 touchdowns. He never fumbled the ball, but he did recover a fumble. He was the starting TE for the Broncos in 2005 when they made their run at the AFC Championship. That year he caught 21 passes for 170 yards with 1 touchdown.

Darrell Jackson WR 2008
Drafted by the Seahawks in the 3rd round (80th overall) of the 2000 NFL Draft. He played for the Seahawks and the 49ers before coming to Denver. He signed a 1-year contract in 2008. He was third on the depth chart behind Brandon Marshall and Eddie Royal. He appeared in 12 games with 2 starts -- starting in Week 1 for the suspended Marshall and in Week 6 for the injured Eddie Royal. He caught 12 passes for 190 yards with 1 touchdown. He rushed 6 times for 18 yards. He never fumbled the ball.

Dan Gronkowski TE 2010-Present
Drafted by the Lions in the 7th round (255th overall) of the 2009 NFL Draft. He was the next-to-last player drafted. He was on and off of the Lions' practice squad before coming to Denver in a trade for Alphonso Smith. He appeared in 12 games with 4 starts. He caught 8 passes for 65 yards.

In looking over this list of players only three standout as deserving the title of Greatest to Wear #82: (1)Robert Scarpitto, Pro Bowl punter and instrumental in launching the Broncos franchise, (2)Jack Dolbin, undrafted player who helped the Broncos reach the Super Bowl for the first time, and (3)Vance Johnson, 2nd round pick who started in 63% of the games he played, played in 4 AFC Championship games, 3 Super Bowls, and was the feature receiver of the Three Amigos receiving corp.

The Greatest to Wear #82
Vance Johnson 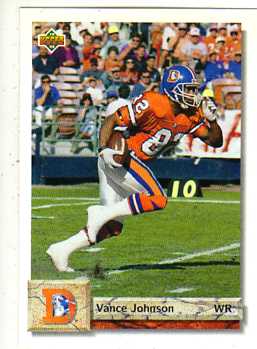