Breaking Down the Roster - Part Two: Running Back

Share All sharing options for: Breaking Down the Roster - Part Two: Running Back 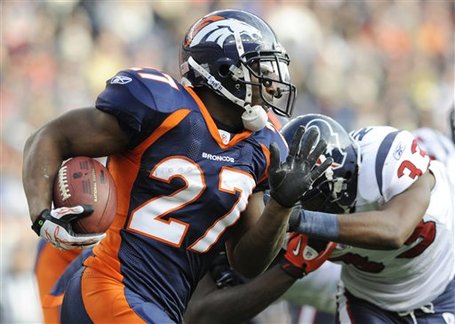 Last week, I began this series on the Broncos' roster with some analysis on the quarterbacks. While I did not include anything on Tim Tebow, who had too small of a sample size of 12 quarters, I wrote that Kyle Orton gave Denver the best chance to win as of right now. Although that is likely to change once training camp begins and also depends on what trade value Orton has once the CBA is renewed, all we can go off of is past performances.

Today, I will do the same with Denver's running backs. Part of the struggles at quarterback resulted from the lack of production and health at this position. So I will begin by stating that each of these positional previews is simply based off of what we know right now. Since there is no such numerical value for "potential", I will only use past performances.

As usual, I not only use the base statistics provided by NFL.com, but also my own innovative statistics on my website at www.queuestats.com for further analysis on players and teams.

Denver currently has 7 running backs on its roster - Lance Ball, Correll Buckhalter, Jeremiah Johnson, Mike McLaughlin, Brandon Minor, Knowshon Moreno, and Lendale White. Of these seven, Ball, Buckhalter, Moreno and White are the ones with the most expectations to contribute during the year. I will address free agency at the end since this is a position that Denver will most likely take a good look across the league to add depth.

This chart indicates the base statistics for a running back along with a rating I created to measure production. Last year, Arian Foster led the league with a rating of 93. You can check out the full ratings for eligible running backs for the 2010 regular season here.

Finally, the past few years have shown Denver can't have too much depth at running back. With Denver's running game possibly needing some added firepower, here is a chart of potential running backs that could add depth and actually have a decent possibility of coming to Denver.

Of the running backs above, DeAngelo Williams career has been the best by far. Unfortunately, the price tag may be too great, even for his former head coach John Fox. With Ronnie Brown finally playing a full season, health may not be too much of a concern. He has been productive and has shown he can shoulder most of the load with over 15 games over 100 yards rushing. Tim Hightower is the only running back that has played significant time as the featured back, and he has played well at times. Although he is not an explosive back, he can definitely play a significant role.

After them, each running back has not shown too much as far as consistency or the ability to be a featured back. However, Darren Sproles has the most upside because of his unique athleticism in the passing game and return game.

Denver has two solid running backs with Knowshon Moreno and Lendale White who unfortunately have health issues. Buckhalter adds experience and some quality production while Lance Ball adds youth. However, Denver has little else after these four.

Expect FEX to pursue DeAngelo Williams unless the price is too steep. If that fails, Denver's next best option appears to be Tim Hightower or Ronnie Brown. Hightower hasn't had great production, but Brown has had health issues. If Denver feels they have a solid featured back in Moreno and a solid back-up in White, then look for them to get someone like Sproles, who can add another dimension in the receiving game as well as take over the role for returning and let Royal line up in the slot.

These are definitely not all of the possibilities, but they are some to think about. Much of this will change once training camp begins.

Although I did not include college running backs because they have no experience in the NFL, Denver could definitely go that route as well. I haven't watched much college football and offenses in college do not necessarily translate to the NFL. If you have any suggestions for college free-agents, feel free to add them in the comment section.