Some Clarification is in Order: The Running Game and NFL Trends

Share All sharing options for: Some Clarification is in Order: The Running Game and NFL Trends

In this part of Some Clarification is in Order: NFL Trends, we continue looking at the offense, moving from the passing game and onto the running game. Now there have been a number of theories about the running game and how it has changed in the modern passing game, ranging from the disappearance of the one back system, to the value of running backs in the draft. We will be looking at a number of trends in the NFL that relate to the running game, it's role in the modern offense, and the changes in how running backs are used.

The usual warning, this isn't meant to be all inclusive, if you have questions concerning my findings, or something you think I may have left out, feel free to ask in the comments section and I will do my best to help either answer your question or refer you to a place that can. So ladies and gentlemen, let's get to this.

Lets begin with this, I am sticking with the same timeline, starting my research at 1978, the year of rapid changes to a more pass friendly rules, up till 2010. So like I said last time, a few key years to note would be 1982, which was shortened to nine games. In 1995 the NFL went from 28 teams to 30 teams by adding the Carolina Panthers and the Jacksonville Jaguars. In 1999 the Cleveland Browns returned, and in 2002 the Houston Texans joined the league, leaving us at our current 32 teams.

Also like I said last time, there are obviously too many metrics and angles to look at, so this isn't a sweeping, all encompassing study, rather an overlook at the running game and what has happened since 1978. So let's take a look at what I wanted to look at indepth in this article.

The first thing I wanted to look at was yards per attempt (YPA), which is a telling indicator of the average success of a run during each year. Now remember, with all these stats, they are a composition of all the active running backs and full backs during each year. Secondly, I wanted to look at were the number of 1,000 yard rushers, which will look to see if there is a trend towards multiple back running systems. Next we have number of 1,500 yard rushers, which will allow us to look to see if the NFL is trending away from the single back system. These two metrics will compliment each other in allowing us to view that trend. The last two things I wanted to study were average rushing yards per team and average rushing touchdowns per team in a season. This will help us understand the trending of how offenses use the running game. So with those metrics in mind, lets get to work.

Like last time, this data table may be a bit too heavy for most, so I will include graphs and reviews of each category as well to help those who are visual learners.

Average Yards per Team in a Season 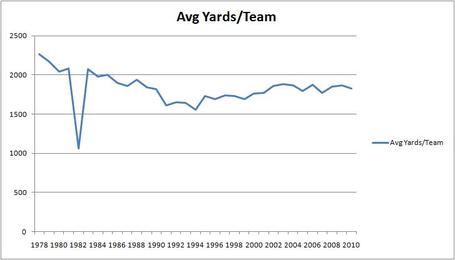 We begin with what many consider the most important part of this trend, the decrease in rushing yards over time. But looking at this table, after the massive downturn of the late 1970's and 1980's, the NFL has trended upward in terms of rushing yards per team in a season. The idea that the NFL is becoming more and more passing centric is off base, it reached that point in the 1990's and has actually leveled out rather than continuing to trend towards passing.

Average Rushing Touchdowns per Team in a Season 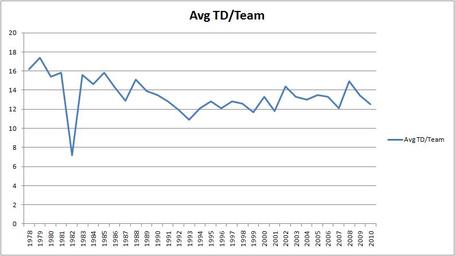 This graph shows an almost exact copy of the trends that follow rushing yards per season. We see the massive downturn in the first half of the graph and in the 2nd half, we see a leveling out. So this finding further supports the idea that the running game isn't being phased out, it's actually stabilized in the past two decades. 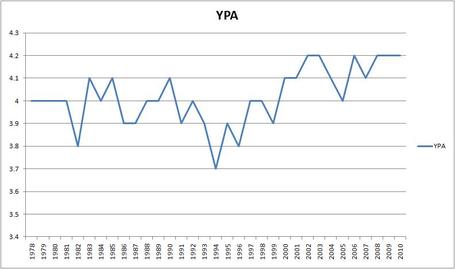 Now we start looking at some other factors that look at the running game from an angle most don't, to see if the running game is just changing, rather than just disappearing or losing importance. So by looking at rushing yards per attempt, we can see how the NFL is using the running game, as well as when it is used. As we can see from the chart, that even with the changes that have taken place with rules being passed to help the passing game, the running game has become more effective, something few take into account. By have a more effective passing game, when you do run, you are much more likely to succeed. A draw play from a prolific passer like Peyton Manning is going to be very successful because everyone is worried about Manning, so they may drop a linebacker into coverage, or play some prevent, giving the running game a chance to succeed. The running game has become more successful because of the newer rules rather then becoming weaker. 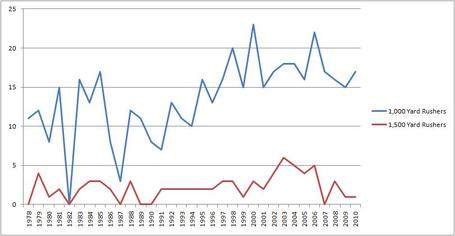 Now we get to a factor I wasn't expecting to look at, but the idea was there, and I went with it. I wanted to look at how the change in the other areas were affecting how teams used the running game and how they use backs in general. So to get a view of this, I looked at the number of 1,000 yard rushers there were each season, and also looked at how many 1,500 yard rushers there were. Now this trend was startling obvious to me when I saw the data, there has been a steady rise of 1,000 yard rushers since the late 1980's, which lends itself to the idea that more and more backs are succeeding. Now many may just think there are more 1,000 yard rushers because more teams are breaking up their carries, that's partly true, but also, while the trend has been slight, there has been a trend that in the 2nd half period of the study, there have been more 1,500 yard rushers than in the 1st half. So there are still premier backs in the league, possibly some Hall of Famers in guys like Chris Johnson and Adrian Peterson, and up and comers like Arian Foster and Jamaal Charles. So there are no lack of premier backs, but teams are just have success with both systems. So with the average running back finding more success, it only makes sense that there would be more 1,000 yard backs.

As the topics I looked at showed, the running game isn't losing importance in the NFL, rather little has changed but running backs are becoming more effective, and are being used differently than they have been used in the past. The running game, to me, has transformed into something different. So while I have no predictions on how it will change in the future, but as the passing game continues to become more effective, the idea and premise that you pass to set up a big run is gaining traction.

So just a review of some other trends I looked at but would be too much for a single post to handle, lets review them. The first trend I looked at was success of early draft picks (rounds 1-2), mid (3-4) and late (5-7) and how success correlated to draft positions. So a quick review of that, there has been a huge drop off in value of a 1st round draft pick. Now that's not to say they are less productive now then they were, just mid round backs are able to put up comparable numbers, just at a better value. So while it is true that a good running back can be found in the mid rounds, taking a running back in the 1st or 2nd round is still the best way to find a quality back.

Lastly, I looked at running backs in relation to a teams overall offense, something that has been discussed before, but I wanted to do a bit of research myself. It is true that the running game is declining in percentage of total offense, the decrease is often overly exaggerated, with the drop much smaller then most expect.

There you have it, hope these trends help us as fans try and understand the direction the NFL is headed.

Next time on Some Clarification is in Order: Offensive Trends Review and Summery