Share All sharing options for: Denver Broncos Greats . . . By the Numbers: #66

This is an interesting group of players. Eleven Broncos have worn #64 in thirty-nine seasons -- almost half of which were from a single player. This group has seen everything from no appearances to 188 starts. Three were undrafted players. Four started their careers with other teams. Three were with the Broncos in Super Bowl appearances. One is the second-highest paid at his position. One has multiple league honors while three were unable to garner a mention in wikipedia.

John Cash DE 1961-62
Undrafted player. He appeared in 28 games with 0 starts. Intercepted 1 pass and returned it for 5 yards -- in a game against the Raiders where Goose Gonsoulin and John McGeever also intercepted passes (though those two returned theirs 64 and 48 yards respectively for touchdowns). He is also four years younger than the famous singer with the same name.

Bill Cottrell G 1972
Undrafted player who entered the league with the Lions in 1967. He appeared in 11 games for the Broncos with no starts and no stats.

Brison Manor DE 1977-83
Drafted by the Jets in the 15th round (380th overall) of the 1975 NFL Draft. There is no record of him ever playing for the Jets and his first NFL season was in 1977 with Denver. He appeared in 107 games with 35 starts. He recorded 5 sacks, 1 interception and 3 fumble recoveries. In 1977 he played behind Barney Chavous, Reuben Carter and Lyle Alzado. He recovered a fumble in the AFC Championship game against the Oakland Raiders -- a 20-17 win that sent Denver to its first Super Bowl.

Lonie Paxton LS 2009-Present
Undrafted player. He played for the Patriots from 2000 to 2008 before joining the Broncos. His 5-year, $5.3 million contract from the Broncos made him the 2nd highest paid long snapper in the league. He appeared in 32 games with 0 starts.

This was an absolute no-brainer:

The Greatest to Wear #66 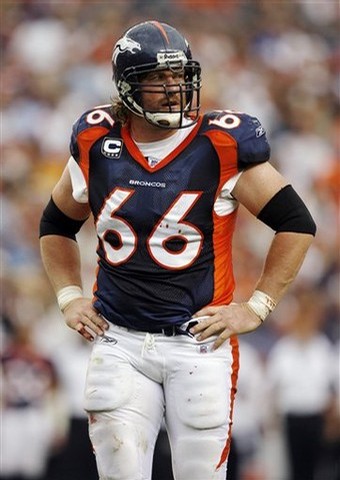