Some Clarification is in Order: The Defense and NFL Trends

Share All sharing options for: Some Clarification is in Order: The Defense and NFL Trends

We're on the home stretch here, with only the defense and special teams remaining as we look at some of the major trends in the NFL over past few decades. This week we will be looking at the defense, how it has changed, adjusted, and fluctuated in the recent years. Next time we will be covering the special teams and it's changes and trends as well. But today, oh today, we examine the defense of the NFL.

We will be looking at a number of topics:

- Relation to the above changes with current quarterback play

So with those topics in mind, lets get to work. We will be looking at each area in the same mind frame as the past, from 1978 to 2010.

Yards and Points Per Game and Number of Plays:

Last week we saw that both yards per game and points per game were steadily increasing. But there is more to the story than just that, there is actually a trend that shows that it takes offenses less plays to score than it used to. It is getting easier and easier for offenses to succeed. 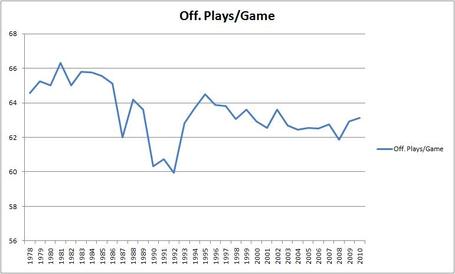 So with the increase in points and yards per game, but a decrease in plays, there is an obvious trend there. The defenses of the NFL are becoming less and less successful at stopping teams, both from scoring and from moving the ball.

We have seen that defenses have struggled to stop offenses in recent years, now we get to see why. We will look at turnovers, both fumbles and interceptions, and sacks per game, to try and get a handle on it to see if we can spot a trend. Hint: You can. 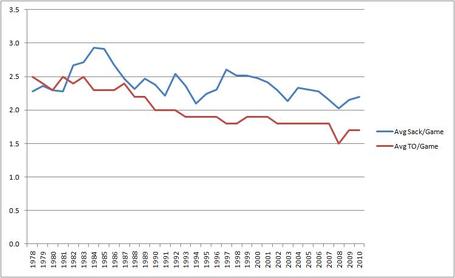 The graph is pretty obvious, both turnovers and sacks have been on the downhill for some time. With defenses garnering fewer game changing events, it is becoming clearer why defenses are struggling.

Here is something else that is playing into part of this, and it's something a little harder to track. Now there is not a archive of 3-4 and 4-3 defenses on the internet, at least not that I've found, so I had to nit pick across a lot of articles to get as many as I did, but I still shows a good picture of how the two defenses are fluctuating. 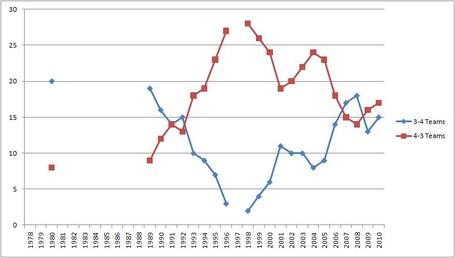 We can see both defenses have had their day in the sun, but clearly there seems to be a balance that is being reached. With the 4-3 reaching it's glory day in the mid 1990's and the 3-4 being more popular in the 1980's, the moved around a bit, but now seem to be normalizing a bit.

Now this is an interesting thing, the changes in defenses. The 1990's were the most successful point in history for mobile quarterbacks, without a doubt, and it started in the late 1980's. Now this is the same time we saw the rise in 4-3 defenses. Now it has been discussed that the 4-3 defense is superior to the 3-4 against mobile quarterbacks for a number of reasons, including a pass rush that comes more up the middle and presents better coverage on the sides to stop a rolling out quarterback, as well as stopping the quarterback from stepping up and out of the pocket by making him face two defensive tackles.  But the moment Peyton Manning entered the league, the NFL did an abrupt face, and the addition of guys like Manning, Brees and other pocket passers saw the rise of the 3-4 again, very rapidly. Manning's distaste for the 3-4 is well known, and for a guy who puts in as much work as he does, and to still have issues with a defense is a sign. But in the past two to three years we've seen something of a balance reached, with some teams moving back to mobile quarterbacks, there are still a large number of teams using traditional quarterback play, this use of both styles is causing that balance in the 3-4 and the 4-3 to be reached.Now this is obviously a simplified down version, but to go much more indepth would require more space than I have.

To conclude today's study, I just want to point out a strange and disturbing trend, the defenses of the NFL are always playing catchup to combat the current style of quarterback play that is popular at the time. This constant adapting seems to be a very bad thing. Players are always changing positions to fit the defense that his new team, or old team with a new DC, may run. Defenses aren't able to establish stability, and because of that, aren't able to maximize the abilities of their players. The defenses of the NFL either need to begin to set the pace of how quarterbacks are going to play, or they will keep getting rolled over.

Teams are scoring more points, being more accurate, runners are more successful, and offenses are doing all this in fewer plays and with fewer turnovers. That's big, really big.

Next week on Some Clarification is in Order: Special Teams and NFL Trends