Some Clarification is in Order: Special Teams and NFL Trends

Share All sharing options for: Some Clarification is in Order: Special Teams and NFL Trends

Special teams is one of the more unique aspects of the NFL, it takes players from both sides of the ball and puts them in situations that only happen a dozen or so times a game. And with these unique plays, we've seen a unique style of player arise in the NFL in recent years, the returner. Devin Hester will likely go down as the best returner of all time, possibly the greatest special teams player ever. Leon Washington is tied for 2nd most return touchdowns in history, Josh Cribbs role on the Browns is defined by his ability to make huge plays. Rookies like Eric Decker (finished top 10 in Y/R) and Dez Bryant (2 return touchdowns) both made huge impacts before getting some time on offense. This type of player is altering the way teams play, but with the recent rule changes this past year, moving the placement of kickoffs from the 30 to the 35 yard line, many people feel this will hurt strong special teams units. We'll take a look at the history of Special teams units, and see if other major rule changes have had much effect.

With that bit out of the way, lets get to talking about what this post is about. We will be continuing to follow the same trend as with the previous Trends posts, we will be going back to 1978 and looking at a few different statistics that will hopefully give us a better sense of how special teams have changes. We will also be looking at some major rule changes to special teams to see if there is a large connection between the rule changes and the play on the field.

Now I am doing this a bit backwards this time, showing the table and graphs before we delve into the topic so that we start discussing the rule changes, we can directly link the change to a point on the graph. So with that in mind, lets take a look at what we are studying exactly.

We are going to be looking at Yards per Return for both punts (Y/PR) and kick returns (Y/KR) as well as Touchdowns (TD), Average Returns per Returner, and Average Yards per Returner. These numbers will all be league averages for an individual returner rather than by team. A note, years that are bold are ones where there were major rule changes.

So let's get to the tables and graphs: 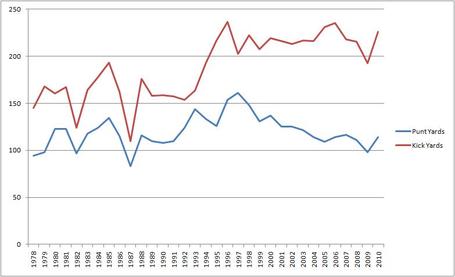 We can see a pretty big trend here in relation to kick return yards, that there is an increase in how many yards the average returner is getting. But punt returns seem to be the opposite, despite seeing big growth in the 1990's, it has been decreasing since than, reaching lows in the late 2000's.

Because the following data is a bit harder to understand using the regular graphs, I will include trend lines to make it a bit easier to see.

Yards per Return for Kicks and Punts 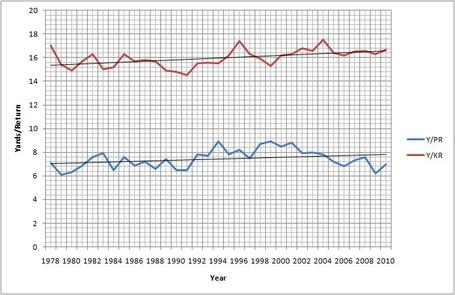 Here we can see that over time, there has been a slight, steady growth in yards per kick return, in red, as well as yards per punt return, in blue. But punt returns have been trailing off in recent years, and seem to be trending downwards. 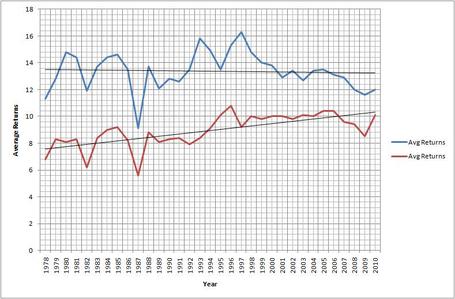 Here is where we start to see more differences in punts and kicks. With the average kick returner, in red, taking more returners in a season, we can see teams are finding one returning and sticking with him, while the slow decrease in punt returns, in blue, we can see teams are starting to avoid using just one or two returners on punts. 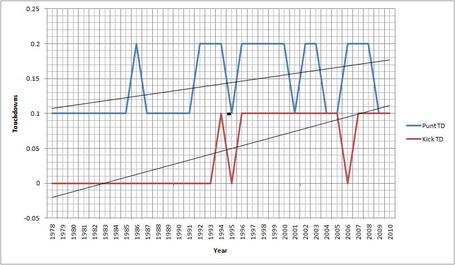 So here we can possibly the biggest trend in terms of special teams and it's connection to return touchdowns. Both punt, in blue, and kick, in red, returns have seen a rise and stabilization of returns for touchdowns.

Now that we have an idea of some of the trends going on in special teams, we can look to see if any of the major rule changes have had an effect on the play of the special teams.

- There is now a 2 point conversion following touchdowns (teams now have the option of passing or running for two points or kicking for one after a TD).

- The starting point of all kickoffs will be the kicking teams 30 yard line (moved back 5 yards).

- Kickoff tees used can be no more than one inch in height (previously 3 inches).

- On any field goal attempted and missed with the spot of the kick is on or inside the 20, the ball will go to the defensive team taking possession at the 20.

- The 11 players on the receiving team are prohibited from blocking below the waist during a play in which there is a kickoff, safety kick, punt, field goal attempt or extra point kick with one exception, immediately at the snap on these plays those defenders on the line of scrimmage lined up on or inside the normal tight end position can block low.

Now some of the key rules to note is that in 1995 they did what we are now undoing, by moving the kickoff from the 35 to the 30 yard line. They also introduced the two point conversion, a now crucial tool of special teams. The change in how missed field goals work was also very large and key in the risk assessment coaches now take. Lastly the change in tackling was made to avoid injuries, due to the speed of special teams play, as well as bad play by lineman.

Overall, these rules favored the receiving team, doing so by taking away low tackles and moving the kicking spot back. It also both helped and hurt teams in field goal positions, making it riskier to kick within the 20, but also adding a new scoring method, the two point conversion. We see this reflected in the graph by shape spikes in almost every kicking category in 1995 and the closely following years, but the growth steadies and levels out again. This rule change did seem to alter the trend of returns, but it seems special teams coaches found ways to contain better, and by 1999, the numbers seem to level off.

- Unnecessary roughness would be called for blocks away from the play on punters or kickers, similar to the same protection quarterbacks have after interceptions.

- During field goal and extra point attempts, the defensive team will be penalized for unsportsmanlike conduct if it calls consecutive timeouts in an attempt to "ice" the kicker. Previously, the second timeout request was only denied by officials, and thus could be used to distract the kickers.

- During a punt, if the kicking team illegally touches the ball inside the 5-yard line, the receiving team has the option of either treating the result as a touchback or replaying the down with a 5-yard penalty against the kicking team. Previously, the receiving team's only options were either the latter or taking over possession at the spot of the foul. This change prevents an ineligible player from keeping a kick from entering the end zone and becoming a touchback.

- If the kicking team commits a penalty, the receiving team can have the option of adding five yards to the return or taking a penalty and forcing the kicking team to re-kick the ball. Previously they could take the latter or decline the penalty.

- To reduce injuries, defensive players cannot line up directly over the long snapper during field goal and extra point attempts.

We see a number of new rules come into play in the 2006 season that have more to do with safety (first rule change) as well as altering how penalties work. There are no rule changes that would alter how the receiving team operates, and the graphs don't show anything either to would correlate a connection.

- Field goal attempts that bounce off the goal post are now reviewable under instant replay. This change followed a decision during the previous season during a Browns-Ravens game when Phil Dawson's game-tying field goal hit an upright, then the crossbar and the back of the goal post.

This year, nothing really of note that would affect the return game, but it's a smart rule change either way.

-The rule regarding balls in play that strike an object such as a video board or a guy wire: In addition for the down being replayed, the game clock will also be reset to the time when the original play was snapped. This change currently only applies for this year, allowing the league to have the option of ordering the video displays to be raised for next season.

- On kickoffs, a blocking wedge cannot consist of more than two players.

- During onside kickoff attempts, the kicking team cannot have more than five players bunched together.

- If an onside kick does not go 10 yards, goes out of bounds, or is touched illegally at anytime during the kick, the ball is immediately awarded to the receiving team.

Again we see more safety changes, eliminating blocking wedges and bunching players. We also see a change that was pretty much put in place for the Cowboys new stadium's big screen, but also affected camera wires in many stadiums, which are often punted at for fun, and since there was no rule in place at the time. The last rule change was an alteration of the previous rule that called for a re-kick.

Though these may not seem like ones that would alter the game play, many were worried that taking away blocking wedges would hurt returns, but there is no evidence of this at the current time.

If we take a look back, the rule changes going into affect next season may seem like they will massively alter how the game is played on special teams, but we should remember two things: one, that we are going back to how things worked before 1995, and while there has been growth since than, it has been slow and steady. Second, that special teams players are general more refined now than they were prior to 1995, and with specialists that didn't exists in previous years, I don't expect the numbers to drop much. Though it will vary from team to team and from location to location.

While returners will obviously be hurt because they will be returning less kicks, they shouldn't expect a big drop in the likelihood of a touchdown or yards per return. But in reality, it's hard to predict what will happen, so we'll have to keep tracking this and see.

So thanks to those who managed to make it to the end, we've covered a lot of ground, looked a lot of topics, and found some well known as well as some surprising trends. So if you ever wonder what direction the NFL is going, take a quick look at the past to get a better view.