Share All sharing options for: Denver Broncos Greats . . . By The Numbers: #92

This is a rather small class -- not only in terms of numbers (only seven players have worn it), but also in terms of seasons (having appeared in only fifteen seasons). The number was not worn by Bronco prior to 1989. Only two players wore #92 for more than two seasons. Only one has worn it for more than three. All seven players were from the defensive side of the ball. Let's take a jump and meet this small but important group of players.

Marco Coleman DE 2004
Drafted by the Dolphins in the 1st round (12th overall) of the 1992 NFL Draft. He played for the Dolphins, Chargers, Redskins, Jaguars and Eagles before coming to Denver. He appeared in 23 games with 16 starts. He recorded 3.5 sacks. He defenses 1 pass, forced 1 fumble and recovered 1 fumble. He accrued 28 tackles along with 9 assists.

Elvis Dumervil OLB/DE 2006-Present
Drafted by the Broncos in the 4th round (126th overall) of the 2006 NFL Draft. He appeared in 61 games with 45 starts. He recorded 43 sacks. He amassed 106 tackles as well as 22 assists. He intercepted 1 pass and defensed 8 more. He forced 10 fumbles and recovered 8 fumbles. He was voted to both the Pro Bowl and the All-Pro teams in 2009. He saw little playing time early on as a rookie, but saw increased time and amassed 8.5 sacks as the season wore on. In 2007, he led the team with 12.5 sacks and intercepted his first pass. He saw something of a slump in 2008, but bounced back strong in 2009 by leading the entire NFL with 17 sacks. In July of 2010, he signed a contract extension, but he tore a pectoral muscle in practice in July and missed the entire 2010 season.

In my mind there is only one possible choice for the title "Greatest to Wear #92:" 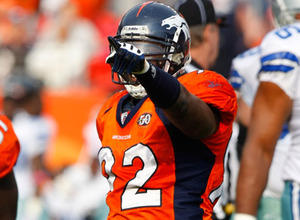