Some Clarification is in Order: Offensive Trends Review

Share All sharing options for: Some Clarification is in Order: Offensive Trends Review

Happy Independence Day to Americans, and a happy regular 4th of July to everyone else!

So with the two parts of the offense covered, passing and rushing, which covered a lot of topics. This third and final part covering  the offense will review what the past two articles have discussed, ranging from the changes in yards per attempt from quarterbacks to the increase in 1,000 yard rushers to the increased efficiency of both quarterbacks and running backs. We will also be talking about and covering some odds and ends topics that I didn't get the chance to talk about before, .

Now it is important to note that it is difficult to define the word "mobile." I did a post some time ago looking at the term, here is the link. Based on my research, I set the parameters of my search to include all quarterbacks from 1978 to 2010 that threw for over 2,500 yards as well as rushed for 250 yards. This would eliminate quarterbacks who weren't starting quarterbacks but ran purely as option quarterbacks, these were popular in the 1990's, and would also include quarterbacks that ran often enough to be fleet of foot, but didn't exclude larger, mobile quarterbacks.

It is important this isn't the most accurate way to judge a quarterback to see if he is mobile, but it is the only logistical way to do it. For informational purposes, the best way to judge a quarterback is too look at his pass to run attempts ratio, but there is no feasible way to do that for an extended period of time. So if there are questions you have about a specific quarterback, please let me know, I will look it up and hopefully be able to answer your question.

So with those parameters in mind, I looked at quarterbacks that were broken into three categories, less than eight pass attempts per run, these are the really mobile quarterbacks, 8 to 13 pass attempts to runs, balanced quarterbacks who can run or throw, and 14+ pass attempts to run, pocket passers. Now the categories I will be judging these players in will be Pro Bowls and which quarterback wins the Super Bowl that year. By looking at these two categories, we can see if more mobile quarterbacks are leading successful teams as well as see if more are seeing personal success. Now I know it's not perfect, and it is important to remember that quarterbacks can move up and down categories each year, so one year they may be in the 8-13 section but the next they may be 14+. Also, I was going to include All-Pro into this list, but only three non-14+ quarterbacks made All Pro's, Steve Young, Daunte Culpepper and Randall Cunningham.

With that in mind, here is the table:

This is where it gets a bit trickier to track because the charts don't come out so pretty for the visual learners in the group, but I got it worked out. I will make a few key points that need to be understood before we look at these charts. The first is that the number of Pro Bowl players has increased rapidly in the last 15 years, especially in the past two, with Super Bowl players not participating in the Pro Bowl, allowing others to get the chance. Because of this, there is a sort of inflation when it comes to Pro Bowls, so keep that in mind, I will discuss it more after the charts.

The second point, that I won't show with charts, is about Super Bowls. Now it doesn't look pretty in chart form, so I will just discuss it. Aaron Rodgers was the 3rd quarterback with less than eight passes to one run to win a Super Bowl, the other two being Steve Young and Jim McMahon. There is almost no growth in that area. Interestingly, the 8-13 section is ahead of  14+, but they both has sustainable levels of success, no change, they are almost even. In the past ten years, < 8 has won 1, 8-13 has won 5 and 14+ has won 4. So in terms of Super Bowl quarterbacks, there is no trend towards overly mobile quarterbacks, while balanced and pocket passers remain the main quarterbacks of the Super Bowl.

So lets get to the Pro Bowl review: 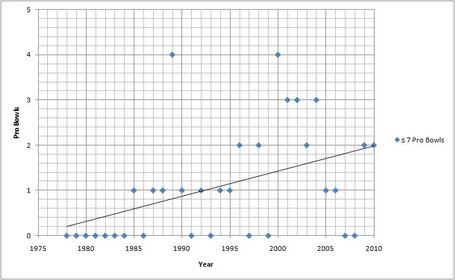 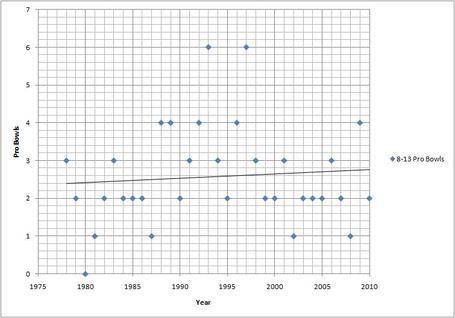 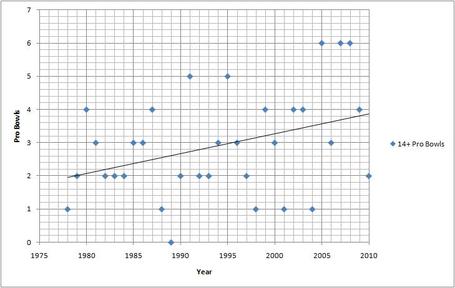 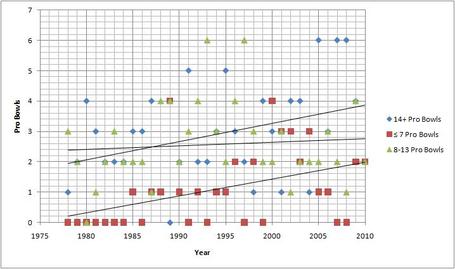 The two parallel lines are the < 8 and 14+ groups, while the slightly more level line is the 8-13 group, I'm sorry that's not more clear, I couldn't get them to color them.

So here is where it gets tricky because it looks like all three options are trending upward, but with that inflation we were talking about, you'll see a bit different story. With inflation added, the 8-13 group, the one that is solid in Super Bowl representation is trending downward in Pro Bowls while both the < 8 and 14+ groups are climbing up at the same rate. So the trend here is that while there has been growth in mobile quarterbacks rising in success, there is no trending away from pocket passers, actually it seems the opposite, both are rising in success.

Next time on Some Clarification is in Order: The Defense and NFL Trends