MHR Poll of the Week for September 11, 2011: Put Your Money Where Your Mouth Is

Share All sharing options for: MHR Poll of the Week for September 11, 2011: Put Your Money Where Your Mouth Is

Okay, well tomorrow is the first game for the Broncos 2011 season, and I personally can't wait to smash the Raiders on Monday Night Football! Well moving on from that, last week's poll asked what squad was the strongest going into 2011, and the results were similar to what you felt in 2010. While two weeks ago was pretty controversial, last weeks was a bit more unified, at least in the comments section. Let's take a look at what you had to say about this question.

as much as I think Orton isnt the answer, we are the only team in the league that features 3 QB’s that have started and won games in the NFL. People seem to forget that. Either of our two backups would be better starters than any QB on the Miami, SF, and Seattle rosters IMO.

That said, WR was a close second.

Von Miller is this years version of Suh. DJ can return to his more natural role and will be more productive. We have a great swing backup at MLB in Nate Irving. I don’t especially like Mays but he should improve with PT. I’ve always thought Woody is an underrated contributor to our team and despite his not ideal size makes an impact. Haggan is great for depth and Mikey Mo looks like a solid guy for depth as well.

Still would of liked to see us sign Barrett Rudd.

This might sound bad but I’m not impressed with any part of our team yet, but I think the coaching has put people in a better position to make plays. John Fox is super cool but I also think Dennis Allen is going to turn this defense around. Go Broncos

There have been specific upgrades at every position except the Corner back position with the return of Champ Bailey and Andre Goodman.

All the other positions have been upgraded from 2010 and will continue to grow into their own roles as the season wears on. The best upgrade began in February with the coaching staff. As is well known most new head coaches who are brought in bring a whole new coaching staff with them, but that wasn’t the case in John Fox. He kept holdovers from Josh McDaniels’ regime and it looks like a sound move. Being familiar with OC Mike McCoy might have been a defining factor of him returning, but keeping the primary playbook together may play a crucial part in how well the Broncos offense does this year. Keeping DLine coach Wayne Nunnely on board is another testament of sound head coaching as Wayne always does a decent job at training him DL. How the Denver Broncos enter the season prepared will be integral to how their seasons plays out.

The coaching is the greatest upgrade of 2011 hands down. 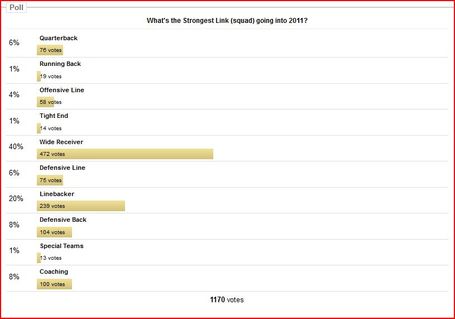 This wasn't the huge sweep that happened in 2010, where wide receivers took a huge chunk of the votes, but it still won easily. Linebackers saw the biggest growth, from among the worst to 2nd overall, while defensive backs fell. Quarterbacks and offensive line stayed the same, as did coaching. Special teams, tight end and running back all stayed about the same, and were fairly low on the list. The most surprising thing to me was how low was running back was considering the improvements that were made.

This week will talk about something that we all have opinions on, the record we will have at the end of the season. This is where the metal, or rubber if you use modern tires, meets the road, lets hear what you think the Broncos final record will be. Once you've done that, let's hold ourselves accountable at the end of the year, when I might be forced to dig this article up.