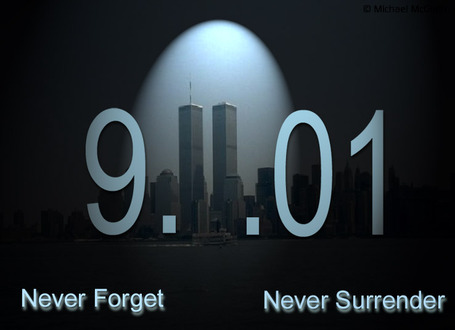 I've been reliving 9/11/01 all morning and I forgot about Horse Tracks. I needed a break or the tears were going to really start flowing. So with a heavy heart, here is some Denver Broncos news to cheer us up some. Go Bless America and all those who paid the ultimate sacrifice on September 11th, 2001.

The NFL and 9/11: Why Both Should Be Honored - Associated Content from Yahoo!
With the 10th anniversary of 9/11 on a Sunday, and coinciding with the first Sunday of the NFL's regular season, there is a lot of talk about football not being appropriate to play on the same day we are mourning the loss of those who died on Sept. 11, 2001.

Myers: Watching NFL on 9/11 is OK | The News Journal
I'm going to watch football today. And I'm not going to feel bad about it. In Friday's News Journal, Sports Editor Jason Levine made a persuasive argument that the NFL should take today off because this is Sept. 11, 2011, the 10th anniversary of the heinous terrorist attacks on New York City, Washington and Pennsylvania.

The NFL remembers 9/11, ten years after | Y! SPORTS
The terrorist attacks of September 11, 2001 happened on a Tuesday morning -- the day when most teams start the clock. Coaches looking at tape, players trying to get past the aches and pains of the previous game. The NFL, getting back up to speed for another week.

NFL.com news: Broncos OC: Team will go with hot hand at running back
Offensive coordinator Mike McCoy told The Denver Post that the Broncos have no set rotation for the team's two top running backs -- Knowshon Moreno and Willis McGahee. Instead the Broncos will go wioth whomever has the hot hand.

Boss out for Denver game - Boulder Daily Camera
ALAMEDA, Calif. -- The Oakland Raiders will be without tight end Kevin Boss for their opener at Denver on Monday night.

Broncos primed for payback - Sports - ReviewJournal.com
If a guy keeps getting his teeth kicked in, he eventually stops smiling. With that in mind, coach John Fox and his new team, the Denver Broncos, should be an angry and motivated mob.

Broncos unleash 'Doom & Gloom' on NFL | Deseret News
ENGLEWOOD, Colo. — Crane operators have taken down the "Invesco Field" reminders at what the locals steadfastly refer to as Mile High.

Broncos' pass rush in great shape with bookends Miller, Dumervil - The Denver Post
There is a way to slow the hype surrounding the explosive pass rush of Elvis Dumervil and his new partner, Von Miller.

Woody Paige: No. 13 jersey luckily linked Tensi with "best friend" - The Denver Post
On Monday night, in the southwest corner of the stadiums second deck, amid the orange-and-blue sea of $84.95 replica jerseysmostly Nos. 7 and 15, and a few 8s — one authentic, slightly faded jersey, which sold eight years ago on eBay for $2,100, will be prominent.

Mike Klis: New kickoff rule to provide safety and excitement - The Denver Post
People might have it wrong about the new kickoff rule. Moving it up 5 yards will increase the chance of Oaklands Sebastian Janikowski kicking the ball into the Mile High stands Monday night.

The Broncos' weaknesses outnumber their strengths - The Denver Post
The 2011 Broncos appear headed toward mediocrity. So said last weeks Denver Post online poll that asked readers what the Broncos record will be this season.

Broncos' Champ Bailey one for the ages - The Denver Post
With the exception of the big news that Champ Bailey had signed a new, four-year contract with the Broncos in late February, the Broncos star cornerback moved out of the spotlight.

Today's NFL games: Openers serve as omen - The Denver Post
Despite the fact that most folks who work in the NFL always say they want to take it one game at a time, opening day, on whichever day it now comes, can have a significant impact on how things go.

Rookie LB centerpiece of Elway's Broncos - AFC West Blog
It was weeks into John Elway’s new role in his old home and he was explaining how he could best help the Denver Broncos take advantage of having the No. 2 overall draft pick.

NFL and Its Fans Remember 9/11 " Predominantly Orange
Looking back on September 10, 2001, the Denver Broncos hosted the New York Giants in a giant Monday Night Football game. To conclude week one of the regular season, the Broncos ran away with a 31-20 victory over the Giants. However, they also took a huge hit when wide receiver Ed McCaffrey broke his leg making a great catch, and was lost for the season.

Remembering 9/11 - BroncoTalk
I can’t speak of the pain felt by those who lost loved ones on that tragic day. I can’t relate to the personal tragedies. But I know the overwhelming burning I felt in my heart. Of humility, awe, sadness, anger, and courage. It brought with it an undeniable affirmation of what America meant to me. I know it was a sensation shared by millions of others that day.

Terrell Davis Talks Raiders, Canton, And The 2011 Broncos " Predominantly Orange
In an interview with DenverBroncos.com, former running back and Denver Broncos great Terrell Davis answered questions about the Broncos division rival Oakland Raiders, his involvement with coaching high school players in San Diego, and whether or not he feels he will ever make it into the Pro Football Hall of Fame.

Oakland Raiders vs. Denver Broncos: Prognostication Pulse - Silver And Black Pride
Gather 'round friends and fellow followers, I bring news from the great one. I was nervous. I had not heard word from the great one. Then a stray cat dropped off this scroll on my doorstep. Behold, the wisdom of the wise one.

The Five Best Games On The 2011 NFL Schedule - SBNation.com
From the first week of the season to the last, the NFL schedule features a buffet of rematches and grudge matches as well as up and comers demanding legitimacy. Mark your calendars for five of the best games the 2011 NFL season has to offer.

Worcester Telegram & Gazette - NFL: Why the Patriots will win fourth Super Bowl in 11 years
The Patriots open their season, the 52nd in franchise history, tomorrow night in Miami. Expectations are higher than Mount Monadnock. As usual.