Share All sharing options for: The Boldest Fans Of The Denver Broncos: Tim 'Barrel Man' McKernan 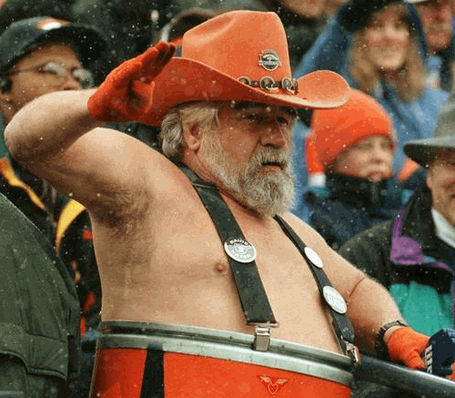 I appreciate all the sponsors SBNation finds for the site. Mainly because it allows me to focus more on content, less on design and development. We try as hard as possible to keep sponsored posts in the realm of Denver Broncos football. This one is no different, but means more since I get to write about the Boldest Fan in Broncos Country. For some teams, the decision on who the boldest fan might be could be difficult. Does any one San Diego Chargers fan stick out? Maybe to some, but not me. I'm sure there is an Indianapolis Colts fan that is pretty bold, but has anyone heard of him?

That's not to put down the fans of those teams. It's to signify just how bold Broncos fans can be, and how much of a love affair there is - or used to be - between the Broncos and their fans. When talking to any football fan about Broncos fans one name always comes to mind - Barrel Man.

Tim "Barrel Man" McKernan is as synonymous with Denver Broncos football as anyone - players and coaches including. Beginning in 1977, the Barrel Man wore his barrell - and little else - to Broncos games, home and away, insisting that he always used his own tickets, never attempting to take advantage of the attention his unique game attire brought his way.

Hot or cold, sun, snow or rain, McKernan was a rallying cry for Broncos fans. As a young fan living in Ohio I can remember broadcasts of Broncos games that would happen to be on TV, seeing a bundled crowd in old Mile High Stadium except for McKernan. There he was, in the middle of all the winter jackets, gloves and scarves, wearing nothing but a cowboy hat and his barrel. That was a source of pride for me, and even 1000 miles away seeing Barrel Man do his thing made me proud to be a Broncos fan.

Not all of those teams were that good - sure, there were Super Bowls, and AFC Championship Games - but there were plenty of 8-8 seasons as well. Barrel Man seemed to be a glue, however, keeping Denver Broncos fans together. If he was out there, cheering on the Broncos without condition, we could too!

It's been nearly two years since Barrel Man passed away. Many things have changed, both with the football team and with the members of Broncos Country. Perhaps we can take a moment to remember Barrel Man and his undying love of Broncos football. The kind of love a parent has for a child - sure, you get angry at times, but you will always be there for them, no matter what, and the love is unconditional.

Maybe that is a bit corny, maybe it overstates it, or perhaps some have forgotten what being a fan is about - being a Broncos fan. Tim McKernan knew. Do You?