Share All sharing options for: MHR Poll of the Week for September 5, 2011: Strongest Link in 2011

The season is here! Last week I asked the question what squad you felt was the weakest going into the 2011 season, and we set another record in terms of votes, I'm seriously impressed with you guys, week in and week out you continue to grow, love it. Okay, well let's take a look at some of the thoughts you all had from last week's questions, and there was some disagreement:

That MIKE spot is still the weak link, IMO. RB is a close 2nd place, though. That’s probably not a popular opinion, but if Knowshon goes down, we could be screwed. McGahee is a role player that is playing his role exceptionally well, but he’s not an every down back. We have some hope in the depth, but I don’t have confidence that we can be a running team if Moreno goes down.

I voted Special Teams because of depth

I am getting more and more comfortable with our starters amongst all the units with each passing week. I truly believe that our 1’s can play with the starters of any NFL team – across all positions What our team is lacking is depth. O Line, D Line, LBs and secondary are the units with the most depth concerns. I believe this will have the most significant impact on Special Teams once the regular season starts.

But I had to go with QB. The fact is we are either short on talent (Orton) ability to bring it in games (Quinn) or experience and polish (Tebow). I wish Depth was an option though because that would quickly get my vote. I do get that Quinn has looked better than ever in preseason games and Orton does have some talent, but I am comparing them to what every team wants at QB and what they have historically shown

If we get lucky, our starters are not really weak in any specific area. Our lines are both very solid, our skill positions on offense are diverse and talented, our LBs and Secondary both have guys with HOF levels of talent AND experience. But say Champ goes down, then our Secondary is awful. Take DOOM out of the D-Line and you have last year. Remove either of our top 2 RBs and it is a nightmare. Lloyd gets hurt, and who is the real deep threat?

It could be argued that TE can get the same treatment as QB does in my argument, but from what I have seen we are in good shape there. I suspect we keep 3-4 TEs and possibly no fullbacks because that is where the talent is. 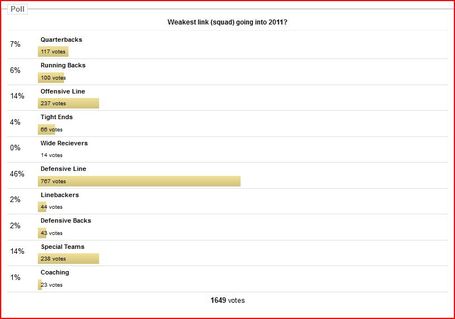 We didn't see a big change from the squad you viewed to be the weakest in 2010 (defensive tackle) but the voting wasn't as unanimous, taking 46% compared to 64% of the votes. Offensive line and special teams also saw huge increases, while coaching, linebackers and tight ends went down. This makes sense, especially after the play during the preseason, where the offensive line and special teams struggled. While the addition of a new head coach, and drafted help at linebacker and tight end.

This week we continue the study, and ask the question what squad you think is the strongest in 2011. When I asked what squad you felt was the strongest in 2010, wide receiver took the vote easily, with 85% of the votes, quarterback followed as closely as one could. But after the 2011 draft, and watching the preseason, do you feel that the result should be similar, or do you believe there is a new strongest squad on the Denver Broncos?