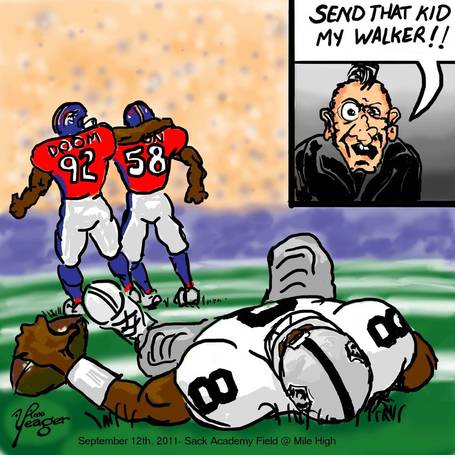 FOOTBALL OUTSIDERS: Innovative Statistics, Intelligent Analysis | 2010 AGL Winners and Losers
Last season, Denver did their best Pig Pen impression, suffering through a cloud of dirt and dust wherever they went. I know I said earlier that offensive injuries hurt more than defensive injuries, but when a team suffers defensive injuries to the extent that the Broncos did in 2010, all bets are off. As I detailed in their FOA 2011 chapter, no team in the free agency era has ever had to deal with the complete loss of a reigning sack champion's pass-rushing productivity. If only that was the end of it.

Wilhite finds work in Denver secondary - The Denver Post
After scanning hundreds of names on the NFL waiver wire Saturday night and Sunday morning, the Broncos decided instead to sign a veteran player as they prepare for their season opener next Monday night in Denver against the Oakland Raiders.

Paige: Tim Tebow's role with Denver Broncos this season remains a mystery - The Denver Post
So, the principal unresolved question remaining before the Broncos open the regular season is: Will Fox insert Tebow during games as the wild-card wild horse?

Denver Broncos go 0-for-3 on second-round picks in 2009 draft - The Denver Post
Factor in the enormous quantity and the poor quality, and it may go down as the worst second-round selections in the history of the NFL draft.

Analysis: Depth and tackling, as well as the play of rookie Von Miller, will be keys to the Broncos' season - The Denver Post
The Broncos get down to the real order of business Monday, the first day of the rest of their season.

Final roster thoughts: Bruton vs. McBath, no Bing | First-and-Orange — Denver Broncos news, stats, analysis — The Denver Post
The decision came down to David Bruton and Darcel McBath. Bruton is the better special teams player but McBath is the better all-around safety. I’m a little surprised they didn’t keep McBath because of the composition of the other three safeties: Two rookies in Rahim Moore and Quinton Carter, and 37 year-old Dawkins. Moore is a free safety but Carter and Dawkins are closer to strong safeties. McBath is more of a free safety than Bruton, who’s a strong safety all the way.

Broncos pass on making waiver claim | First-and-Orange — Denver Broncos news, stats, analysis — The Denver Post
Although the Broncos were No. 2 in the waiver claim order, it’s no surprise they passed on snagging a player off waivers this weekend. Had the Broncos placed a claim on a waived player, they would have not only received the player but the player’s existing contract.

K Steve Hauschka claimed by Seahawks | First-and-Orange — Denver Broncos news, stats, analysis — The Denver Post
Just one of the Broncos players cut Saturday was claimed off waivers and it’s no surprise that it was kicker Steve Hauschka.

NFL.com news: NFL Division Power Rankings: NFC North tops the list
Based on that criteria, here are my current rankings of the toughest divisions in football: (Interesting note: Based on my blue-chip rankings, there are not two blue-chip quarterbacks in the same division)

NFL.com news: Report: Rib injury could sideline Chiefs' Cassel for opener
The Kansas City Chiefs starting quarterback left the game during the second quarter after taking a hit from 340-pound defensive tackle Howard Green. Cassel later told The Kansas City Star the team was "just being cautious" after he had the wind knocked out of him and that he wanted to re-enter the game.

NFL.com news: Intriguing storylines abound with preseason out of the way
Every preseason provides clues about the regular season, this year especially. There are so many good storylines heading into this season after the most unusual offseason in years.

NFL.com news: Payton, Saints revved up for Thursday night's opener vs. Pack
In a not-so-typical move for a coach, Sean Payton refused to play down the New Orleans Saints' season opener at Green Bay, saying Thursday's prime-time meeting between the last two Super Bowl champions is more than enough to get him excited.

NFL.com news: Harbaugh vs. Carroll highlights the 2011 season
The NFL season is a week away and everybody is ready for football to start. Even the president is willing to move his speech before Congress to make sure that it does not interfere with the opening of the NFL season.

QB Lewis awarded to Browns on waivers | National Football Post
Quarterback Thaddeus Lewis, who was somewhat of a surprise cut by the St. Louis Rams on Saturday, has found a new home with the Cleveland Browns.

What do the Bears get with Meriweather? | National Football Post
Here's what I see with safety Brandon Meriweather when we talk positives: range from the middle of the field, ball skills and the ability to play the deep half in Cover 2.

Chester Taylor has a new home | National Football Post
It’s only been one day since the Chicago Bears dropped Chester Taylor, but the veteran running back has already found a new home.

Jets claim receiver Gilyard, three others | National Football Post
In addition to Gilyard, the Jets claimed quarterback Kevin O'Connell off waivers from the Miami Dolphins, center Colin Baxter from San Diego and defensive back Andrew. Sendejo from the Dallas Cowboys.

Police investigating drowning at home of Antonio Smith - ESPN
A man who apparently drowned in the swimming pool behind the home of Houston Texans defensive end Antonio Smith wasn't affiliated with the team, authorities said.

Everette Brown, 2009 second-round pick of Carolina Panthers, waived - ESPN
Brown was the Panthers' second-round pick in 2009 but he never developed into the pass-rushing threat they hoped he'd become. Brown appeared in 28 games (starting three) for Carolina and had six sacks and 47 tackles.

Peyton Manning may miss Week 1 of NFL season with complications from neck surgery - Peter King - SI.com
No matter that it's Labor Day and that no real games happened over the weekend. Things are happening. The NFL doesn't take a holiday when others do.

NFL needs to re-evaluate preseason experience, make it fan friendly - Ann Killion - SI.com
In the wake of the violence that took place at the Raiders-49ers preseason game on Aug. 20 there has been outrage, concern and new policies instituted: such as expanded police presence and restrictions on tailgating at Candlestick.

League suspending Titans' Ahmard Hall for four contests - NFL - SI.com
Tennessee fullback Ahmard Hall says his NFL suspension for using performance-enhancing substances is the result of a stimulant he took to stay awake on a drive from Nashville to Texas in February.