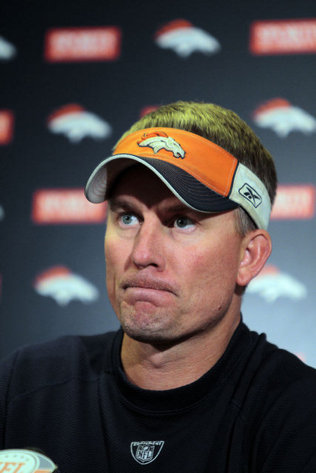 Now that McCoy has missed his window on what looks like a head coaching position with two franchises we can look at the real possibility of having Mike McCoy as our offensive coordinator for a fourth season.

This last season may have been the only full season McCoy in charge of the offense as Josh McDaniels called the plays in 2009 and all but three games or 2010. Fox has said that he let's McCoy put together the offensive game plan and call the plays on game day this season.

There are those that like McCoy and seem to think that there were other reasons for the lack of offensive points (faith in Tebow, Tebow's execution, Receivers not getting open, OL poor pass protection, RB depth). They would like McCoy to stay and help in the development of QB Tim Tebow.

There are those that firmly place the lack of consistent offensive production on McCoy due to predictability, stuborness, and a lack of aggressiveness in the play calling and offensive game plane ( Buf 14, KC 3, NE 10). They do not understand why a single screen pass wasn't called against NE and other teams when they were constantly blitzing.

I am curious where the court of public opinion of MHR stands and see what the majority of fans may lay. I generally wouldn't ask for a Rec, but I would like the poll to stay up for a few days. This really isn't an article (I don't want to try to sway people to see what people really think) as much as a poll. So please remember to Rec if you would like to see more votes from members. Of course please add your reasons why you voted Stay or Go. Thanks.

Where do you stand on Mike McCoy as the Offensive coordinator of your beloved Broncos if you had the choice.