As many of you know, I've analyzed every game this season in terms of WPA. WPA stands for "Win Percentage Added", and it's a stat that was derived over at AdvancedNFLStats, by Brian Burke. WPA is the likelihood of winning the game, for any situation that is described by down, distance, score difference, and time remaining. You can calculate a team's WPA before every play, and the play's outcome impacts the team's likelihood of winning.

Using this approach, we can look at the "biggest plays" of each game. In other words, these plays are the plays that most impacted the team's chances of winning or losing.

Well, the season is over now, so now we can look at the team's biggest plays of the year! This will be a two part series. First off, we're going to be looking at the bad plays. In order of increasing awfulness, these are the plays that hurt our chances of winning the most. And so, the Top Ten Biggest BAD plays of 2011... can I have a drum roll please!

Number Twelve! (Sorry, we have some ties, so I had to cram a couple more in.) 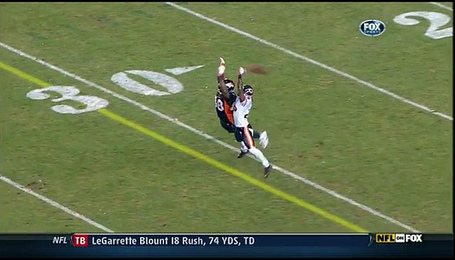 Denver has just benefitted from a Marion Barber mistake, and the Broncos are driving down the field late in the game with zero timeouts. Given the lack of time left and the field position, every play was hugely important, and this incompletion (-0.18) was one of Denver's last remaining chances to gain enough field position to enable a makable field goal attempt. The drive would stall out here, but it worked out anyway - Matt Prater made a 59-yard field goal to send the game to overtime. Incidentally, the announcers were thinking there was some defensive pass interference on this play. 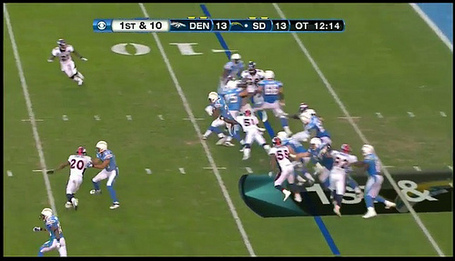 Early in overtime, we had punted and managed to pin San Diego all the way back to their eight-yard-line. Statistically, we had a big advantage at that point - we were over 2/3 likely to win the game. But this sixteen-yard run to the 24 changed that, and made the game effectively even again, for -0.18 WPA. Ryan Matthews ran the ball up the middle, Joe Mays was the player that needed to make the tackle, and he missed it. Fortunately, we were able to force a punt later in the drive. 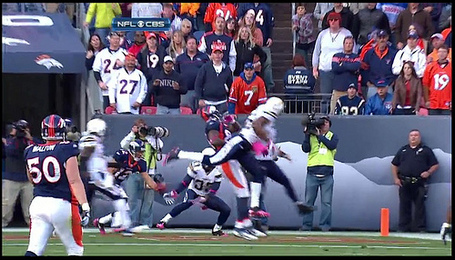 While this play was also worth -0.18, that's only because Denver and Tim Tebow had managed to claw their way back to an 18% shot at victory, when it looked like there was no shot. Still, the odds weren't completely ridiculous that we'd be able to win the game from the 29-yard-line. But as you can see here, a mad scramble in the back of the end zone (combined with a well-timed shove that sent Matthew Willis past the end line) led to an incomplete pass on the final play of the game. 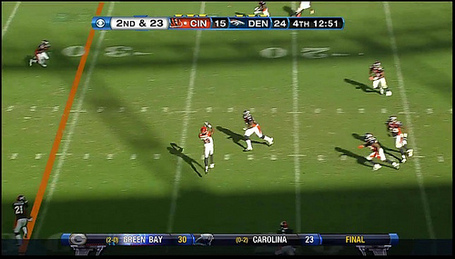 Let's just say that bad things happen when you have Brian Dawkins in pass coverage, handing off to Joe Mays in pass coverage. Hole in zone! Hole in zone! This led to a very long run (and a freakishly fast Cassius Vaughn) before Jerome Simpson was brought down, 84 yards later, at Denver's 9 yard line. Cincinnati was down 9 at the time, and this long play (-0.19) put them in a much better position. 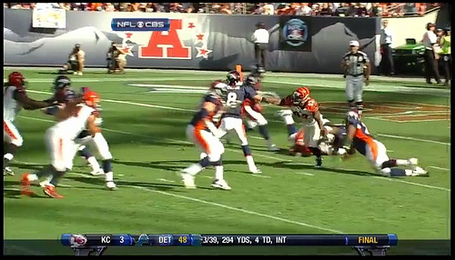 Earlier in the game and late in the third quarter, Denver had started a drive deep in their own territory. Kyle Orton dropped back to pass and succumbed to a strip-sack (-0.19). A combination of Clady getting beat around the edge (two plays after committing a holding penalty), and Orton not stepping up into the pocket far enough, this gave Cincinnati excellent field position. Fortunately, Cincinnati would only get a field goal out of it. 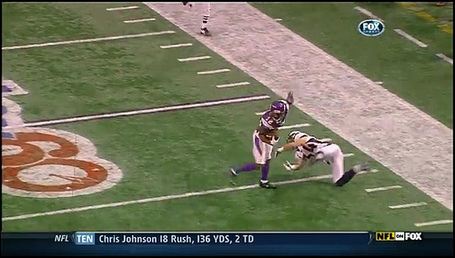 Minnesota had a lot of success with underneath crossing patterns in this game, and this was the result of one of them. Percy Harvin catches the ball, turns downfield, and proceeds to turn Kyle McCarthy into a pretzel. This was early in the fourth quarter. Minnesota was up one point at the time, and this long touchdown reception (-0.20) put them up eight points, at 29-21. 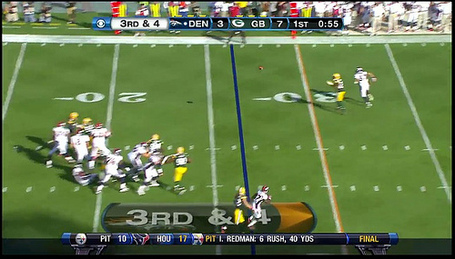 It may be hard to remember through all the haze and trauma, but Denver actually had the lead early in this game. At this particular point in time, Green Bay had just scored their first touchdown, and Denver had the ball back with a chance to drive and grab the lead back. But then the roof caved in, and not from Green Bay's offense. Kyle Orton drops back to pass here, telegraphs where he's going, and Charles Woodson jumps the route to the sticks. This pick-six (-0.20) gave Green Bay a 14-3 lead, and then on the kick-off, Green Bay recovered a surprise onside kick on the way to scoring again. Denver never recovered, in a very long afternoon. 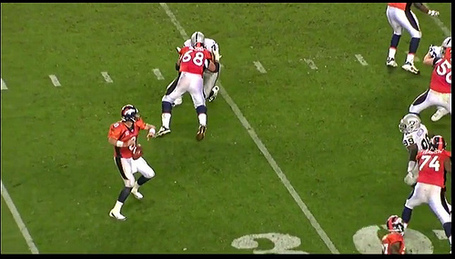 That picture is just painful to even look at. In the first game of the season, on Monday Night Football, Denver is down three points early in the fourth quarter. We're at Oakland's 24-yard line, and a really cool play design - a fake pitch combined with a counter pass route - results in Kyle Orton just flat out dropping the ball. One of the weirder images of the season, as Orton actually followed through with part of his pass before realizing the ball wasn't in his hand anymore. This turnover (-0.20) led to a gut-punch of a three-play drive by Oakland, resulting in a touchdown that we'd never be able to catch up to. 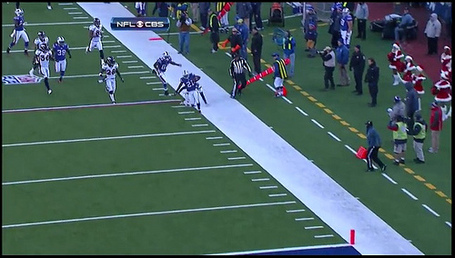 In the second quarter at Buffalo, we had what looked to be a low-scoring game break open with this long punt return. This touchdown (-0.21) was followed on the ensuing kickoff by our own TD return, which was unfortunately nullified due to a pretty dicey block-in-the-back penalty by Dante Rosario. And I still think Leodis McKelvin is out-of-bounds in that shot. 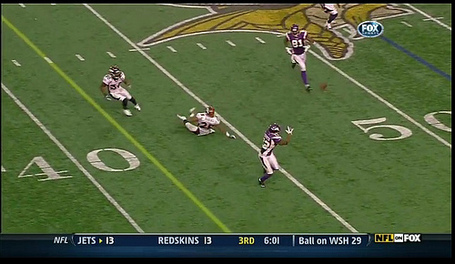 This was another long touchdown in Minnesota. Percy Harvin illegally pushed over Chris Harris, or maybe Chris Harris tripped, which led to Harris screening Bruton out of the play - although it looks like Bruton had a bad angle anyway. This long touchdown (-0.22) also took Minnesota from +1 to +8, but earlier; late in the third quarter. 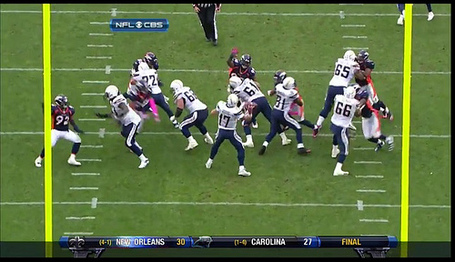 This was just a tough, tough play. Late in the game, Denver and Tim Tebow had managed to pull themselves within two points. This was a 3rd-and-10 with 3:10 left, and we blitzed six. Phillip Rivers had to throw his pass extremely early - you can see him leaning back, as he practically threw it from his heels. Since it was so early, he had to throw it high. Almost an eephus pitch, started before the receiver went into his break, and it ended up being a perfect pass, in a place where only Malcom Floyd could get it. This 38-yard-pass (-0.29) led to a San Diego field goal, which put Denver in the position of needing a miracle touchdown to win it.

And the Number One Biggest BAD Play of 2011 (I seriously doubt anyone would ever guess this one): 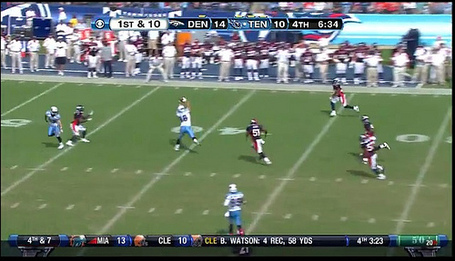 This game was a relatively boring defensive struggle. Midway through the 4th quarter, Denver had a four-point lead. On 1st down, Matt Hasselbeck drops back and proceeds to hit his tight end for a long gain in the middle of the field. It looks like Joe Mays again had responsibility, as in some defenses, the middle linebacker is responsible for dropping back into a deep zone. I would bet it was plays like this that led Denver to adopt their nickel defense as their main alignment. This deep pass (-0.29) would lead to a touchdown three plays later, and on the next drive, an unfortunate tip-drill interception would end Denver's chances of winning the game.

So, there you have it! The top ten biggest (bad) plays of 2011. Apologies for putting everyone through this, but fret not! Because it occurred to me - none of these bad plays really mattered, because none of them kept us from getting to the playoffs. And, we lost to the AFC Champions. The only way any additional wins would have impacted our playoff situation is if we had managed to have home-field advantage against New England. That would have required winning five or six additional games, and I don't see that opportunity here. Winning just one additional game or two wouldn't have made a whit of difference.

However... one additional loss would have led to us missing the playoffs, and prevented one amazing game in Broncos history. So while we didn't really have any bad plays this season that cost us any major opportunities for the season, we certainly had a *ton* of good plays that were all 100% essential. They were all necessary for us to make the playoffs, and have some incredible, memorable moments in our 9th home game of the season. And we'll be exploring all of those in the upcoming Part 2 - The Top Ten BIGGEST Plays Of 2011 - The GOOD Plays.