I have a new toy MHR!

It's called NFL rewind with "All 22" film! I've mentioned here or there that I've wanted to get into breaking down plays and analyzing X's and O's. On one hand it is a daunting task because 1) I'm not an expert 2) I'm just starting to dabble into the strategy and X's and O's behind the game. On the other hand it is pretty cool to be able to look at something and more or less know why a play was a failure or success beyond shouting at the TV "THAT GUY SUCKS, CUT HIM!!!"

The only expectation I have from this is to get better at it and have some fun along the way. Hopefully what I share here can help folks see football in a different light as well. And for those of you out there that are more X's and O's savvy, please add your take and correct me if I'm wrong. I have no ego and that's the only way I'll get better.

I've had some help from the staffers here and basically, identifying personnel groupings boils down to identifying the RB's, TE's, and WR's on any given play. Take the O-line and QB out of the equation for right now because they are the constant. You have 11 offensive players minus the 5 linemen and 1 QB which leaves you 5 spots.

Personnel groupings are most commonly represented by two numbers such as 11, 12, 13, 02, etc. So instead of reading eleven, twelve, thirteen etc, read it this way 1/1, 1/2, 1/3, 0/2. The first number tells you how many RB's are on the field, the second number tells you how many TE's are on the field. For example if you see me say "The Chargers are in their 12 personnel" it means they have 1 RB, 2 TE, and 2 WR on the field. So how did I know how many receivers there were? Simple, add the running backs and tight ends together and subtract from 5. The total left gives you the wide receivers. Let's practice:

Are you getting the hang of it? If not go back to the first example and try again until you've got it!

He was targeted 10 times with 6 receptions for 81 yards and 2 TD's in Monday Nights game. However 8 of those targets, 5 of those receptions, 68 of those yards, and both TD's all came in the 1st half. In the 2nd half, Gates was held to just 1 reception for 13 yards.

So, why was he so effective early and why did he drop off late? Come with me and you'll see...

The Broncos were playing man primarily with Mike Adams taking on Gates and Rahim Moore playing deep in the middle of the field. This first play is Gates' 15-yd TD reception.

Broncos are in a variation of their base defense. Bannan and Vickerson are the DT's, VonDoom are DE's, Woodyard, Brooking, and Irving are the LB's. Champ is on Malcolm Floyd at the bottom of the screen and Chris Harris is on Meachem at the top of the screen. Both are playing off man and Harris is showing inside leverage which means he is going to use the sideline boundary to help him out.

The Chargers are in their 12 personnel with Mathews directly behind Rivers in "I" formation. Before the snap TE Randy McMichael goes in motion to the right side of the formation in order to help the RT with Von.

At the snap Rivers fakes to his left. The linebackers stay in position and Woodyard eyes Mathews coming out of the backfield, this is his assignment on this play. Gates pushes up the field and must give a shoulder fake as Adams squares up to the inside anticipating the route coming over the middle. 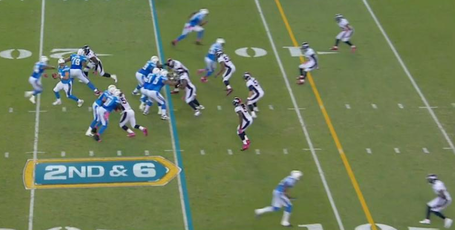 This is a mistake (remember Rahim is over the top in the middle of the field). Gates cuts sharpe toward the corner and Adams is out of position and slow to react leaving the big man wide open for an easy TD. Nothing special here, Adams manned up on Gates and got beaten. 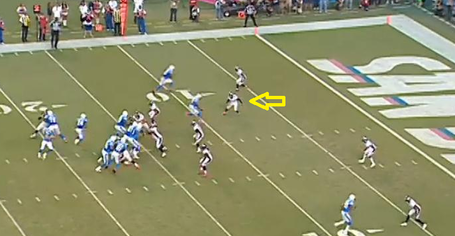 Lets look at another long reception where Gates burned Adams

The Chargers are again in their 12 personnel with Mathews behind Rivers. Before the snap, McMichael motions to the right of the formation in the backfield.

At the snap, McMichael squares up to block and Rivers play-fakes to his right. The linebackers hesitate for a moment and then charge up the field towards Mathews. Down the field, Mike Adams takes a step forward reacting to the playaction. He quickly realizes it's a pass, and squares up. But that step cost him some ground and Gates speed added more than enough separation coming across the field. 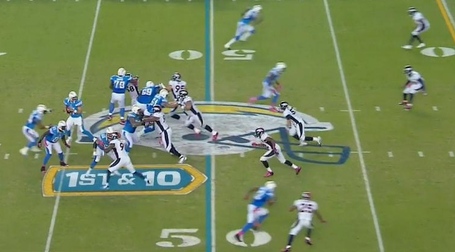 23-yard completion. Notice at this point the Broncos have been primarily playing Man with some safety help over the top?

In the 2nd half a few things happened. 1) The pass rush of the Broncos really turned Rivers into a basket case. He checked down much more and Norv dialed up many more screens where Gates is basically just another guy out there. 2) The Broncos started to bracket Gates with a linebacker and Adams and chip him coming off the edge. Let's take a look at the first example:

The Broncos are in their base defense. The Chargers are lined up in their 12 personnel, McMichael is closed to the right, Gates is split to the left. Rivers is in shotgun with Mathews to his right. Gates runs a pivot double move outside to inside and probably has Woodyard beat....but Rivers freaks out and checks down to Mathews. 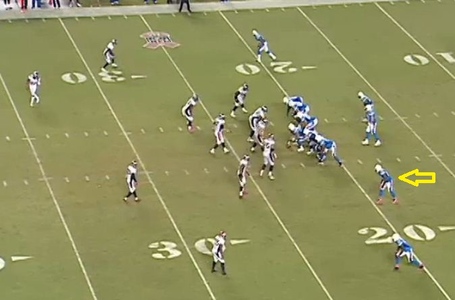 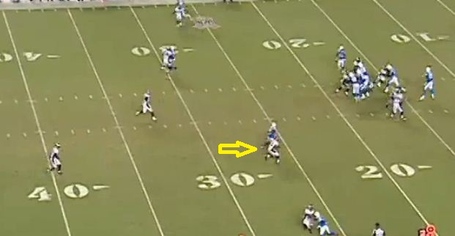 Rivers punks out, the rush isn't even there yet 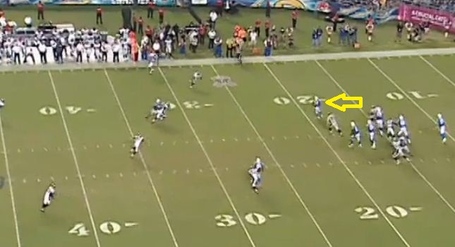 Ok MHR, here's the last sample in this particular matchup. This is an example of how the Broncos used a couple bodies on Gates to make him irrelevant in the 2nd half:

The Chargers are in their 11 personnel. Gates is at the top of the screen, Rivers is in shotgun with Mathews to his right. All three receivers are split to the left. The Broncos look to be in their dime defense with Jim Leonard on the field. At the snap Woodyard jams Gates before taking on his responsibility. 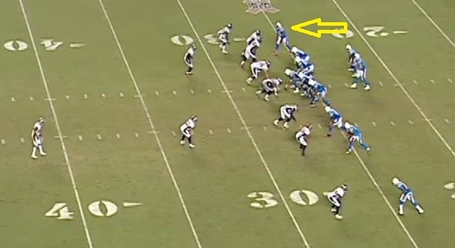 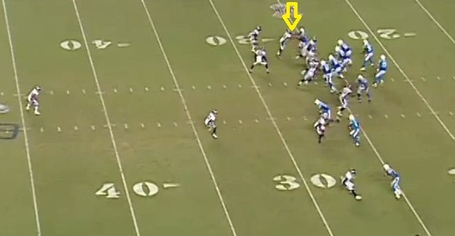 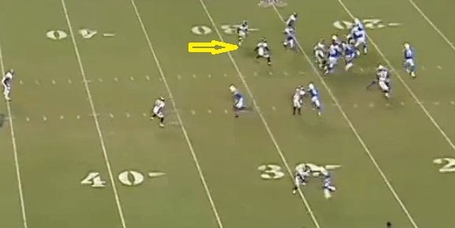 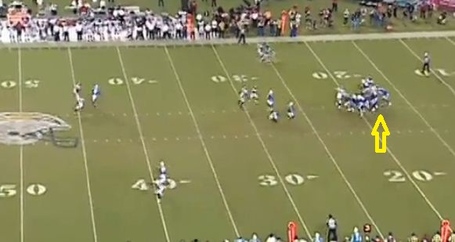 Let's take a look at it from a different view, notice at the end that Gates comes free when the defender falls....but it's too late, the Wolfeman knocketh... 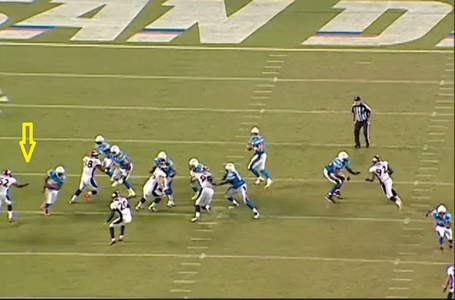 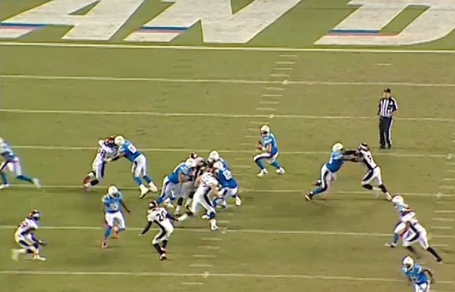 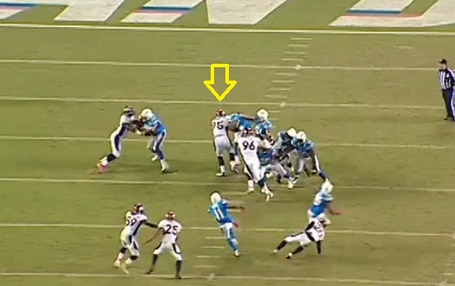 So in the 1st half, the Broncos chose to man-up on Gates, provide no help in the way of double coverage, or really even chip him coming off the line. One on one, Gates is capable of beating most LB's and Safeties so while Adams had a rough go and has been beaten consistently the past couple of weeks, guys like Gates, Gronk, and Welker tend to do that to people.

The flow of the game changed in the 2nd half. To begin, the Chargers came out with some quicker passes. Once we got some momentum going as a team, the pass rush hurried Rivers into some ill advised check downs with Gates wide open. Add to that the Broncos jamming him at the line and putting another body to help out and we can see why Gates went from being an impact to an afterthought.

Hope you enjoyed MHR, see you next time!