Broncos v. Saints: Questions and Keys to the game

Hope you enjoyed your bye week MHR, time to get back to business!

Share All sharing options for: Broncos v. Saints: Questions and Keys to the game

Forget records folks, the Saints are on a two game winning streak and playing some fantastic offensive football. This is another in a line of high-powered offenses the Broncos have/will face this season. This team is every bit as powerful and star-studded as the Patriots, and we all remember what happened in week 5. This isn't the aging Steelers, the rebuilding Raiders, or the San Diego Super Chokers, this is a team with a lot of weapons and one that has the firepower our defense has struggled with. Bottom line, this should be a shootout. And when I had a chance to pick which game I would attend this year, I chose this one for one reason: It's not everyday you can see two elite and future HOF quarterbacks duke it out in person. The last time I attended a game, Josh McDaniels was our HC, Kyle Orton was our QB, and the lowly Raiders were led to a 4th Q comeback by none other than JaMarcus the Hutt. Painful to say the least...

What we learned about 2 weeks ago

Stickum.......STICKUM?!? REALLY??? HAHAHAHAHAHAHAHAHAHA, not only are the Chokers an assembled group of prolific losers, they are an assembled group of cheating (?) prolific losers!!! I mean really, what good is stickum when your QB can't even get you the ball? Use all the stickum you want Eddie Royal, it doesn't help mediocrity! All (most) truth aside, that game within our division was a turning point of the season, and the Chargers are headed right for Los Angeles! Hopefully they learned one valuable lesson, cheating never prospers, unless you are the 01', 03', 04' Patriots.

*If you're wondering why I didn't can this after reading the Chargers were using towels with "resin", it was so darned funny I had to leave it---besides most of it is true;)

Our defense came up huge forcing five 2nd half turnovers. Peyton "the Freaking" kept his cool and engineered three touchdown drives. Anyone else still excited he's our QB? We have a shot in every game...and what's more, our entire team believes it! I sincerely hope though, for the sake of my sanity and heart that our team puts together a few efforts of 60-minute football out there. Seriously, if I wanted a nail-biter every week, I would ask for Dan Reeves as my coach and the Teebs as my QB. That sounds like a match made in run-up-the-middle-heaven.

Are coming off of a home victory against the Stickums Resins and a road victory against the Creamsicles. Drew Brees is playing about the best football a QB can be playing at the moment. He extended his All-time record to 48 straight games with at least one TD pass and is currently the top rated QB in TD's and the 3rd rated QB in yards. One thing that he's struggled with this year has been accuracy, as he's down to about 60.8% (he's flirted with 70% the past few seasons). Other than that, here is how their team ranks in the major categories both offensively and defensively:

As you can see, our team is facing Brees and his weapons. I will be very disappointed if our offense can't produce for 60 minutes against one of the worst defenses in the league. Speaking of those weapons:

These are the main guys Brees looks towards. From what I've seen, Colston has been used all over the place catching TD's in the slot, over the top, and even in the Redzone on fade routes. Lance Moore is his alter ego who has benefited from some soft coverage from defenses that are focused elsewhere, Sproles has been the speedy threat we all remember from his SD days----check out his use in the redzone below, and Jimmy Graham, though banged up as of late is someone that Brees trusts enough to throw up some jump balls and guess what? More often than not he comes up with them. In fact, let's take a look at some of the great plays made by Colston, Graham, and Sproles this year:

On this play, the vertical routes clear the garbage underneath and a combo of bad linebacker reaction and speed turn this crossing pattern into a TD: 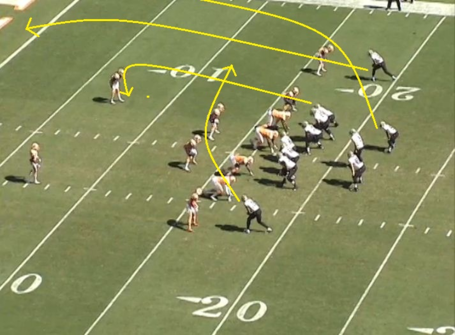 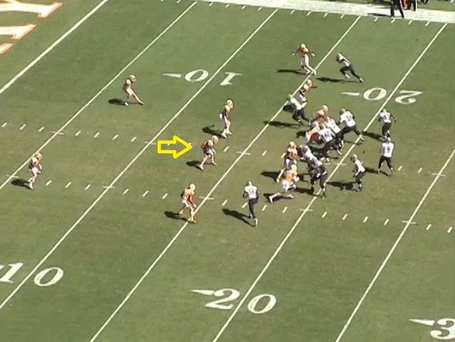 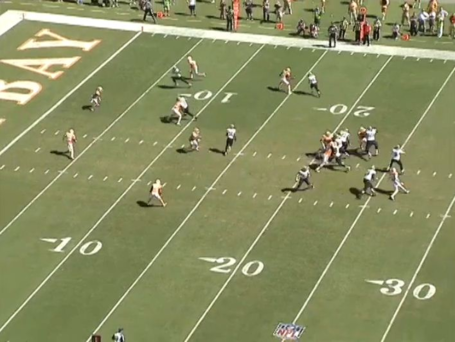 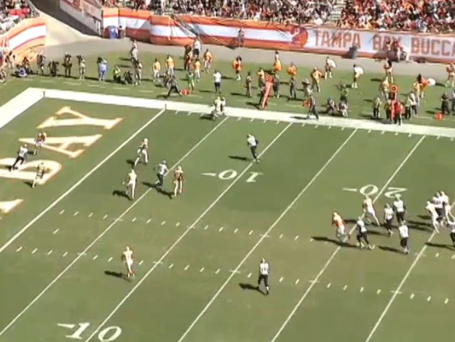 Next up, he runs a beautiful in/out/post pattern and Brees places the ball nicely behind the LB for an easy score: 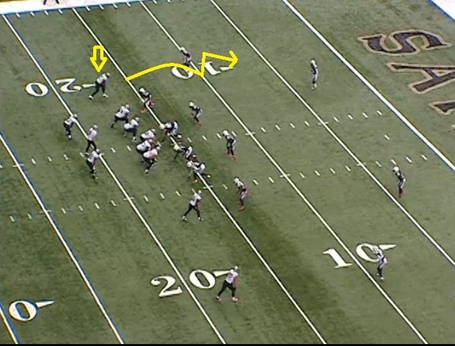 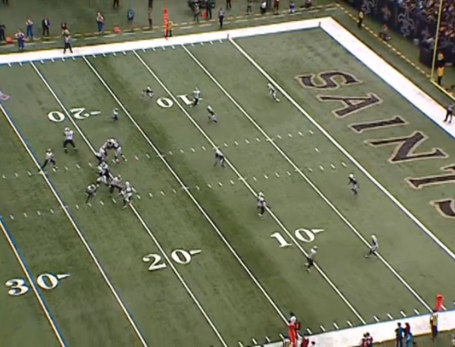 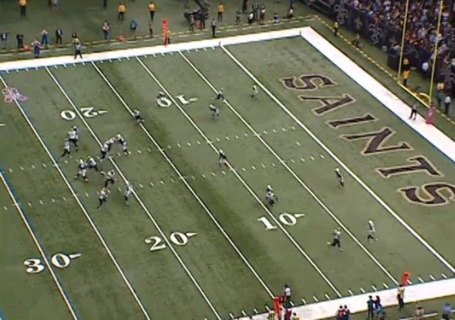 Now, the next two players Jimmy Graham and Darren Sproles, these are redzone weapons that are almost automatic, let's look at Jimmy Graham first. Though he's been banged up, I still expect him to play this week.

In this play against the Chiefs, the Saints isolate him by lining up in a trips formation to the right side of the line: 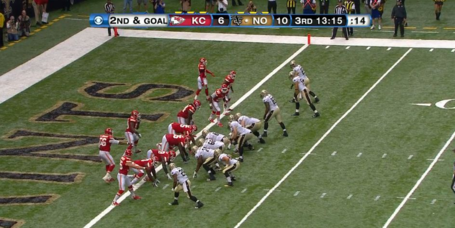 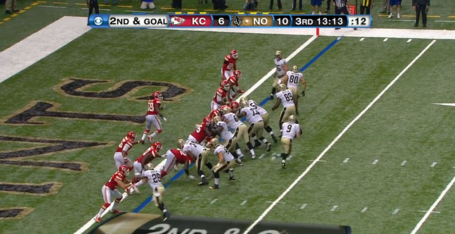 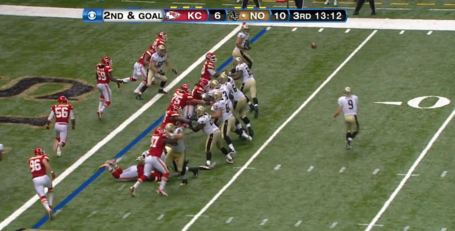 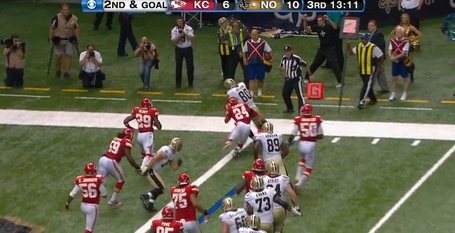 Next, seems to be a Panther mistake, as he's left uncovered from the snap: 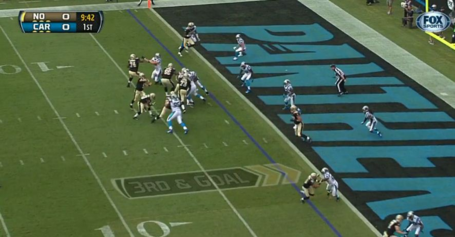 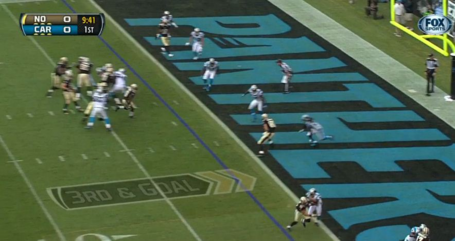 Finally, Brees just trusts his big man to go up and get it...and he does: 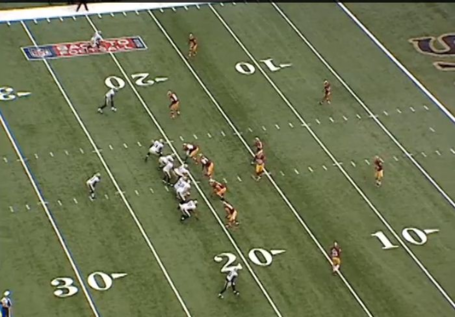 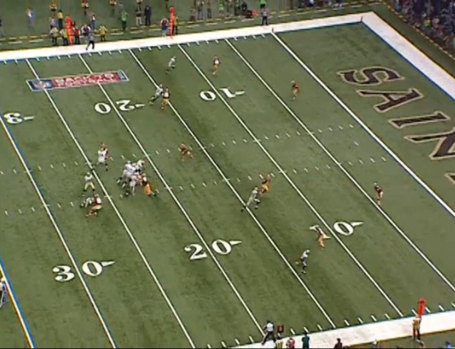 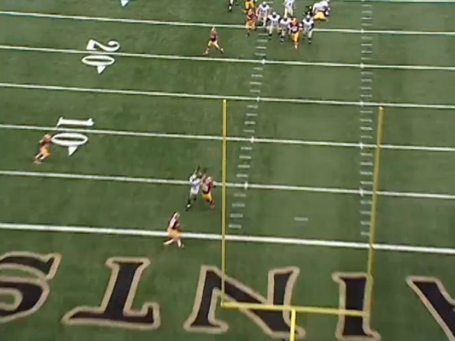 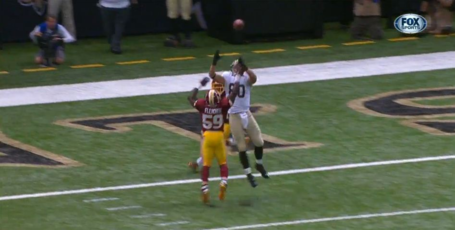 Now, this is a route I've already seen burn the Broncos, and Antonio Gates was the culprit. He fooled Mike Adams with a in/pivot out move that left him wide open. When you see this route multiple times from one guy against different opponents----in this case Sproles, in limited film study, you know it is a staple they rely on, so keep a look out for it in the Redzone Broncos Country!: 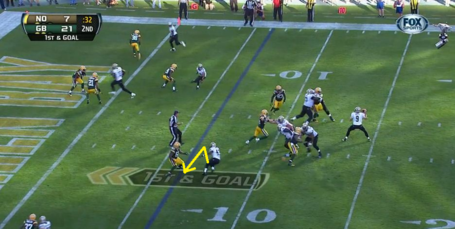 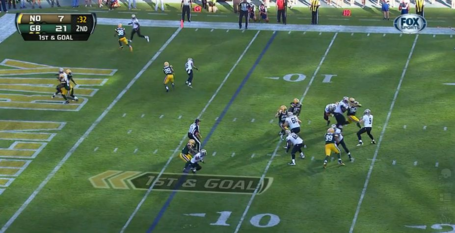 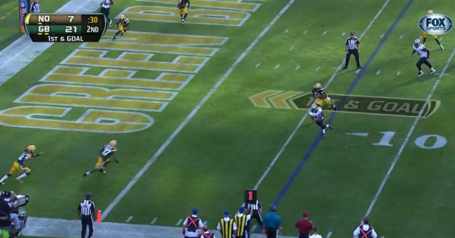 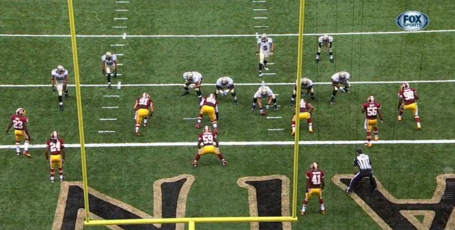 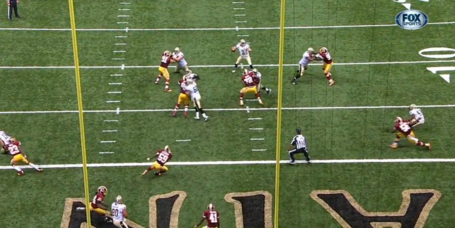 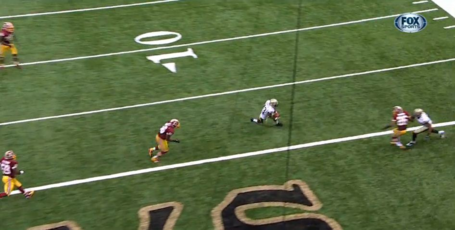 In the end, you can die many ways defensively against this team, and it will take a great collective effort of guys winning their individual matchups (and a little bit of luck) to keep them from scoring too many points.

1) Will our entire team quit coughing up the football?

Have yet to play a turnover free game, next time just fall on the ball Jim Leonard.

2) Will our running game get back on track?

Big early deficits and porous blocking up front have led to a couple lackluster games back to back.

From watching his reps he's very close to breaking one. In the passing game he has been in the game later on when Peyton is pushing the ball downfield playing catchup. The checkdowns are there, so is the screen game.

4) How will our defense defend the Saints?

Who do you double, who do you bracket, and who do you leave one on one?....Brees has a quick release and if we plan on getting to him our coverage is going to have to hold a bit longer this game---I don't anticipate much pressure if not.

I really loved seeing the younger guys get some time a few weeks ago.

6) Can Tracy "Porter" Drew Brees just like he "Portered" Manning in the SB?

I am anxious to see his role coming out of the Charger game when Chris Harris and Tony Carter played so well.

7) Can our defense limit redzone opportunities?

The Saints are so stacked offensively that the redzone becomes a "pick your poison" affair.

I think we're in store for another shootout. And in shootouts, it might come down to who has the ball last. I would love nothing more than to shut down the Saints on national TV, but given our struggles especially in the middle of our defense all season I don't see that happening. Really the keys can be summed up by a couple things:

2) we will need to make a big play defensively at some point in the game.

You might be saying well duh Bronco Mike, but seriously, we will need a turnover to rob them of a scoring opportunity. If Doom doesn't strip Rivers and Carter doesn't run it back two weeks ago, who knows where we would be today.

Broncos 42 Saints 28.....Because the Broncos owe me a victory for making me witness a JaMarcus comeback in person back in '09 haha