Win some Broncos swag by predicting the score of the Broncos-Saints Sunday Night game in Week 8.

Boy what a long Bye week this has been. It seems like an age doesn't it? Welcome back to Football season Broncos Country! As our favorite team prepares for their next opponent, Who Dat?, the New Orleans Saints Dat's Who Dat, we begin with the latest prediction contest.

Last Week, we gave away a Broncos Foam finger and an NFL Commemorative tin containing a nice Broncos T-shirt to Lido997, who had the very first comment and nailed it. The Week before saw the autographed Von Miller jersey given away and I have found a replacement prize for the exact score. But before we get to that, I want to announce that since the jersey was handed out, the Bronco bucket which was that week's prize is rolling over to this week. 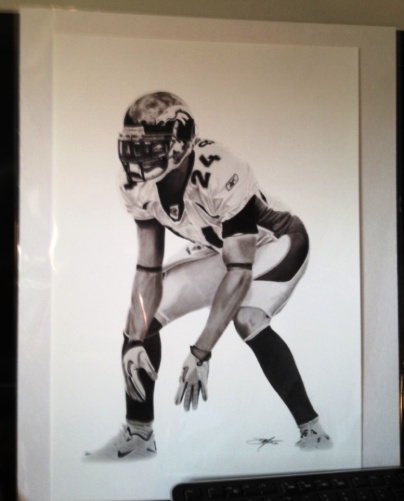 This is a 13" x 19" print from a drawing by Don Medina, a friend of mine and an excellent artist. Don and his wife Sonia live in Pueblo, Colorado and are rabid Bronco fans. I met them through Facebook and after that we started bumping into one another at various Bronco functions like Training Camp and the Summer Scrimmage. After visiting Pueblo last month for their annual Chile Festival, I ran into them yet again and this time I was able to personally check out some of Don's work in person. This print (and others as you will see if you visit the link) would look good in any Bronco fans Man or She-Cave.

Let's go over the Ground Rules: