Happy gameday MHR, let's take a look at some things our defense can do to slow down Nola's offensive attack and more importantly their trigger-man.

Elite QB's are a special breed of player. They can singlehandedly impose their will upon opposing defenses and pick them apart consistently and methodically. They almost always can diagnose things presnap and make adjustments as needed, they are keenly aware of the abilities not only of their weapons but of the defenses' weapons, they make good decisions, and they are very tough to shut down over the entire course of a game. The natural question becomes, how do you defense an elite QB and limit their attack?

Both Manning and Brees fit the bill of elite QB's. So I suppose much of this can be applied to Manning as well. Bottom line, you are going to give up some yards and some points to offenses such as these. But if you can prevent success on even just a handful of snaps per game, it can give your team the leg up it needs on the road to victory.

In no particular order, here is what our Broncos defense needs to do in order to slow Brees and the Saints down:

1) Give a relentless effort every play, all game long

3) Win your matchups up front

4) Get your arms up and clutter passing lanes

5) Remain disciplined in your assignments

None of these points are mutually exclusive. They are things I noticed and quantified in watching some of the successful plays defenses have had against him. Let us take a closer look at some of these plays and identify the things I'm talking about.

In this first play, it is 3rd and 10 with the Saints offense in 11 personnel. The defense shows a lot of movement upfront presnap. At the snap, a few defenders on the left side of the formation drop back into zone coverage, the Redskins have overloaded the right side of the formation and send the corner and safety on a blitz. you can't see it in these looks but there is a single high safety in the middle of the field. Sproles picks up the safety, but the overload and movement presnap leave DeAngelo Hall with a clear path to Brees and an easy sack. Given our success in bringing Chris Harris and Mike Adams on blitzes, we should see something like this. 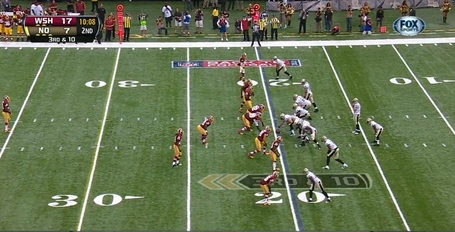 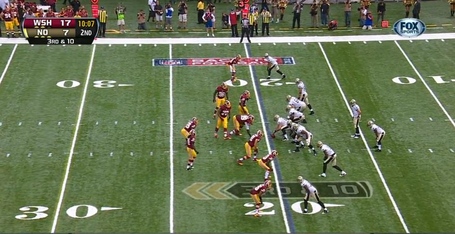 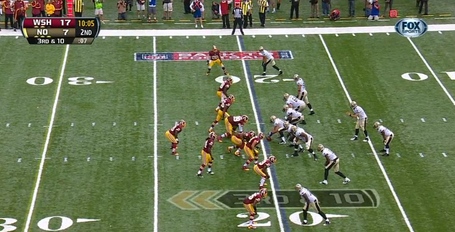 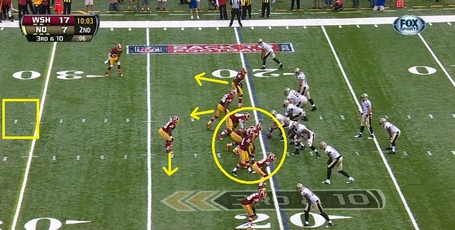 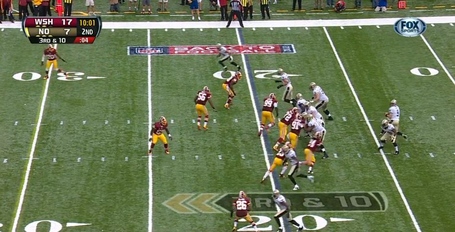 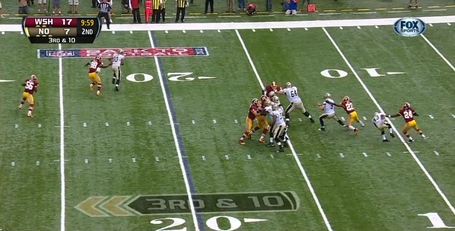 Now, we all know Drew Brees is a bit challenged in the height department. He counter balances this disadvantage by moving well in the pocket to create more favorable throwing lanes, and by having a very high release point in his throwing motion. If our linemen can throw their hands up to disrupt some of these passing lanes we will get some tipped passes and possibly an INT, let's take a look at some plays like that.

In this first example, the Saints are facing 3rd and short. The Saints line up in 11 personnel once again. Notice the Bucs secondary has elected to play a safe zone and there is plenty of room for Brees' checkdowns to operate. Also notice the amount of space Brees has in the pocket on this play, the D-line is nowhere close to him, but they get their paws up and deflect a pass for an INT. 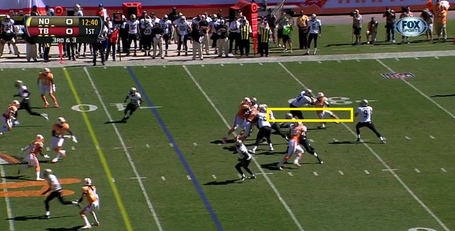 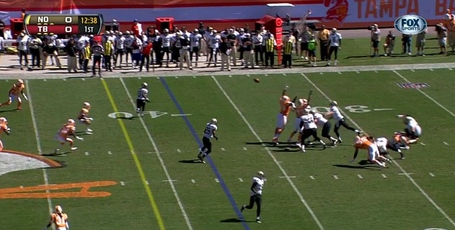 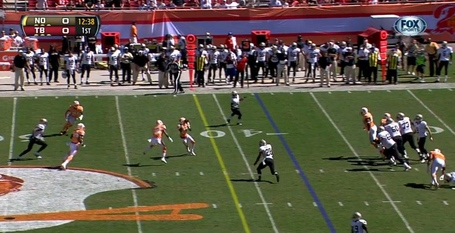 Here's another look at disrupting an open play by deflecting the ball. Again, has Lance Moore wide open underneath, but the big fellah reaches up and swats the ball off target. 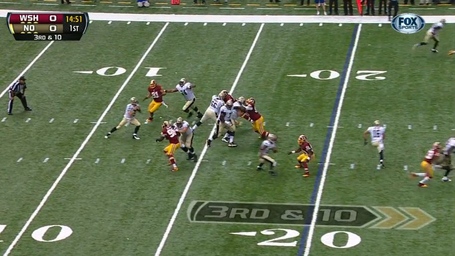 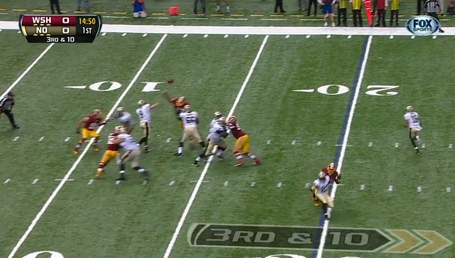 Next up, we have a disciplined defense just doing it's job. The Saints run a playaction fake with Brees bootlegging out to his right. The Panthers DE #95 pushes upfield limiting the time Brees has to react. The linebackers quickly recover to play coverage against the TE coming across the field and the back coming around underneath. Brees pumps once, and then throws a poor pass into the waiting arms of the Panthers linebacker that jumped the route. 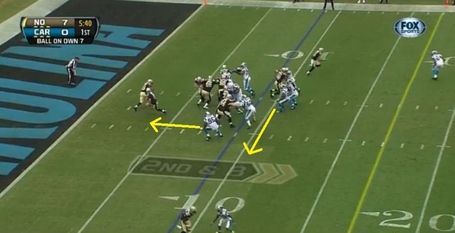 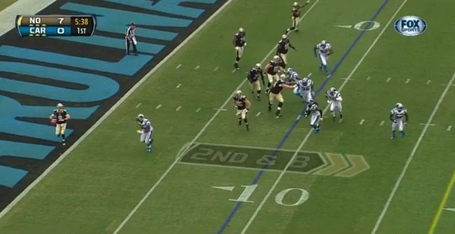 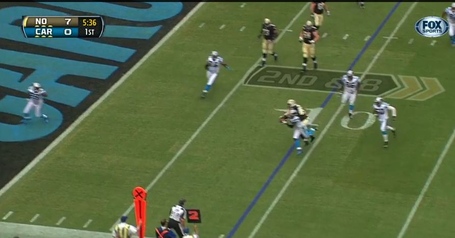 There's going to be times when our front four will be called on to get pressure so that the secondary has extra men in coverage. Bottom line, they are going to have to win some of their battles and get to the QB, just like we'll see here. We have a 3rd and 5. The Panthers elect to drop eight defenders into a shallow zone to defend the short routes underneath. The right DE still manages to split his double team and converge on Brees in the backfield along with the left DE who has beaten his man on the outside. 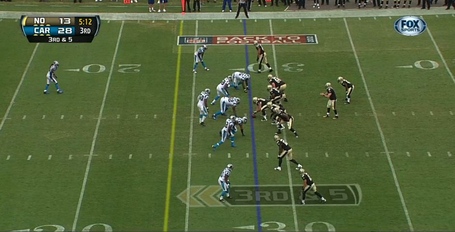 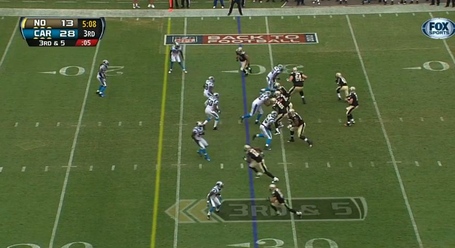 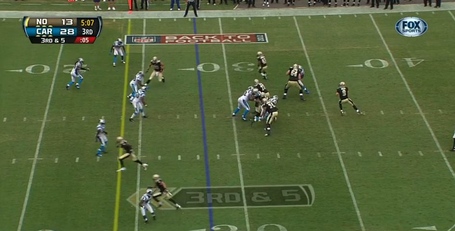 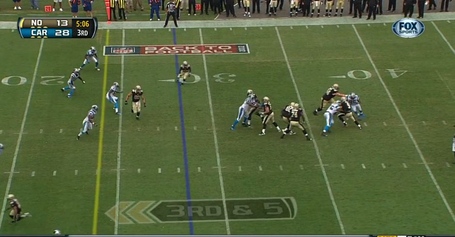 Finally, what's wrong with a little luck? The next two plays illustrate that sometimes, with everything in place, the elite QB will still make some bad throws to thwart his own efforts. In the first shot, nothing more than a ball getting away from Brees and a streaking Jimmy Graham up the seam. 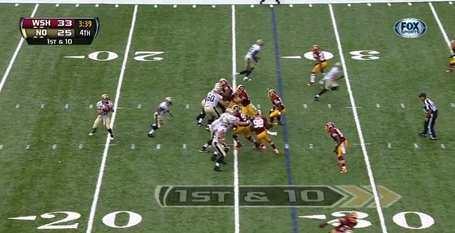 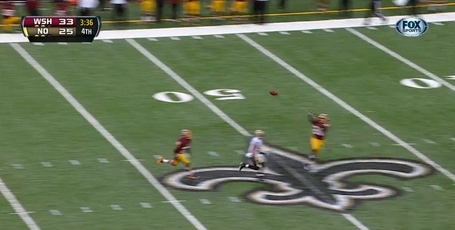 Finally, Brees throws behind a wide open Devery Henderson coming across the middle. Henderson attempts to grab the ball but deflects it to the area of Quentin Jammer who makes a nice play to intercept it.

So, do I think it is realistic to believe our defense can shut down Drew Brees and the Saints offense all game? Nope. But do I think we can make enough plays in key situations to limit Drew Brees and the Saints production? You bet. And if we do that my friends, we will come out of the game victorious, guaranteed. So keep an eye out for the little things Broncos Country. Will our defense do enough of them correctly on key plays to affect the overall outcome? We shall see, and I will see them in person---GO BRONCOS!!!