1. That is how many third downs the Saints converted on Sunday night. Let us take a closer look why...

First, let me make this clear----most of the Saints 3rd down opportunities were manageable. In fact all but four were 7 yards or less to convert. Four of them were 3 yards or less. You want to know the other interesting thing? The Saints chose to pass on every one of them. We've all clamored for more play-action etc on 3rd and short, but after seeing the garbage the Saints put up, it is not preferable to throw every time, especially when you are doing so out of shotgun almost every time. Here is a chart of all the plays I will be taking a look at here:

Also notice that only one of them came on our side of the field, the Saints couldn't drive the ball at all. Now I have to apologize in advance, the NFL game rewind doesn't have the coaches film up for our game yet so for some of the plays it is hard to focus and see what is going on in the entire field of play. I took some good notes though and can describe exactly what is going so you shouldn't miss out on much. The bright side being that the broadcast film is more clear.

Let's get into it play by play!

The Saints are in 11 personnel, the back behind Brees with trips to the right. The Broncos are in their nickel package.

At the snap, Brees play fakes to his left and boot legs out to the right side. 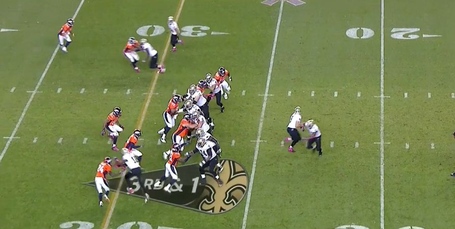 Both Trevathan and Von push upfield towards Brees and Brees let's one go toward Lance Moore on a short out route.

Tony Carter has blanket coverage on him and converges on the ball to deflect it away. IN-COM-PLETE!

Two things at play here, first Trevathan and Von cut off Brees options by limiting his time. He didn't have the time to stop and survey the entire field, nor did he have the option of trying to leg it out. Next, brilliant coverage both by Champ on Colston coming over the middle and by Tony Carter ensured that the punting unit would be on the field.

11 personnel, Shotgun split to the left. The Broncos are in their nickel defense.

At the snap Brees rolls to his right. Lance Moore runs a quick out route and has Chris Harris by a step. 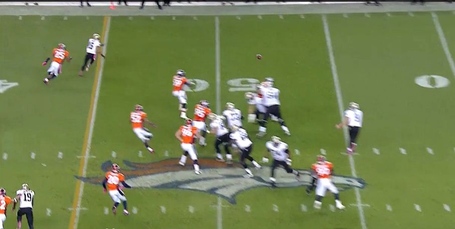 Chris Harris flashes some speed, closes on the ball and deflects it away. IN-COM-PLETE! Great play and individual effort. Nothing much more to see, seems like the Saints play design all the way.

11 personnel, Shotgun with Sproles lined up wide. Broncos are in their nickel defense.

At the snap, Jimmy Graham fires off and runs a short curl route. Mike Adams is off man, so the throw is open. (This was later in the game and the goal was to keep a big play from occurring). The only problem is, Big #99 Vick gets his club up and deflects the pass IN-COM-PLETE! 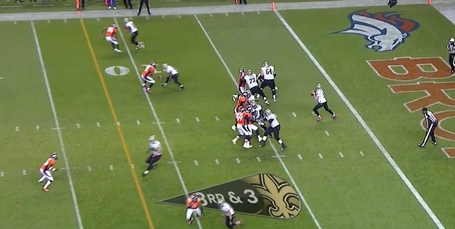 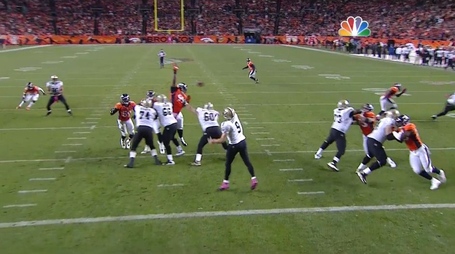 11 personnel, Shotgun, Sproles is split wide right. Broncos are again in their nickel defense. Brees takes the snap and is looking left the whole way. Both Woodyard (up the sideline) and Adams have great coverage.

Brees comes back over the middle late to Jimmy Graham who has a step on Danny Trevathan. Brees doesn't get any heat on the ball and floats it allowing Trevathan to close and deflect it...IN-COM-PLETE! 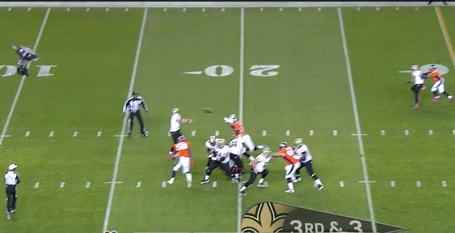 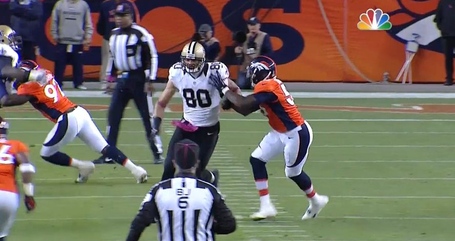 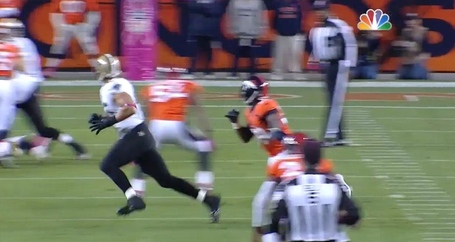 11 Personnel, Shotgun, Sproles to the left, trips right. Broncos in nickel. Brees takes his drop and zeroes in on Lance Moore deep over the middle. I can't quite see who was supposed to be in coverage but he is wide open. There is a LB over the middle and Brees throws it behind Moore in order to avoid the LB. The ball hits short and to his back. IN-COM-PLETE! 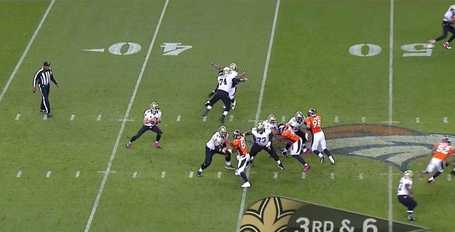 11 personnel, Shotgun, back to the right, trips up top. Brees is looking to his left immediately, but the coverage is there.

Wesley Woodyard waits for the back to clear out on a route before blitzing----great call and recognition working together here.

Brees is STILL looking left and never sees it coming...POW!!! 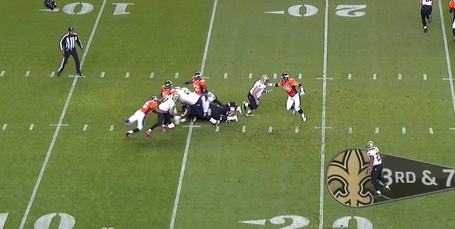 21 personnel, Shotgun, back to the right, Sproles split to the left. Trips left and D. Henderson comes in motion. Broncos are in Dime personnel with Jim Leonard deep. It is very interesting--Adams, Harris, Carter, and Leonard are all playing zone on that side of the field. 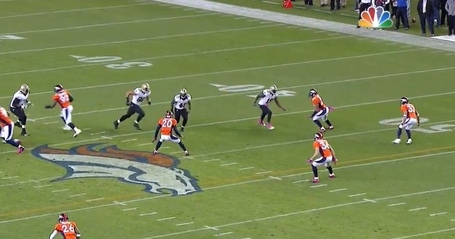 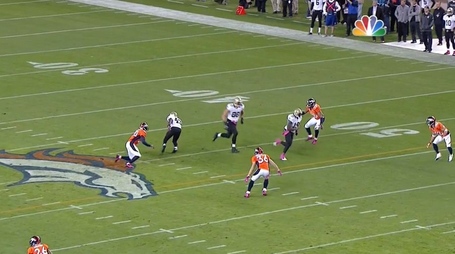 Henderson splits up the seam and brings Jim Leonard/Tony Carter with him. He's well covered, but there is a window. 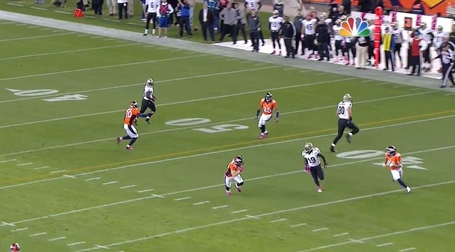 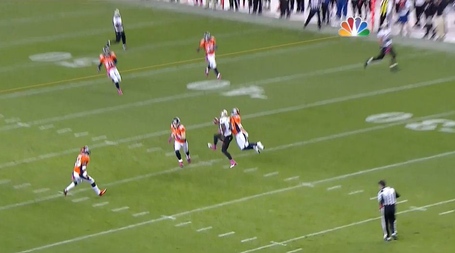 The ball flutters a bit and is batted IN-COM-PLETE!!! On a second look, it appears that the ball might have been slightly tipped at the LOS. 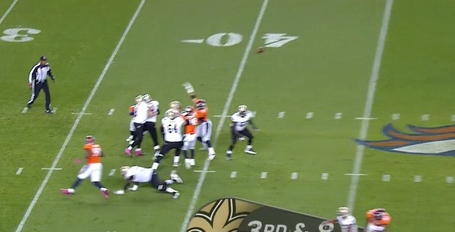 11 personnel, Shotgun, back to the right. Broncos in nickel. Brees is looking deep middle, but nothing is there. At the last second, he comes back to his checkdown Sproles, but seeing Woodyard in good coverage, he just throws the ball at Sproles' feet IN-COM-PLETE! 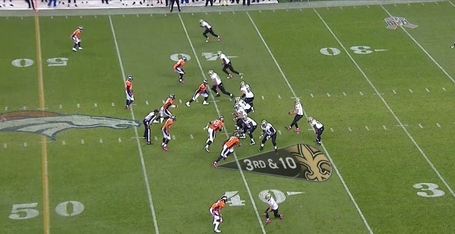 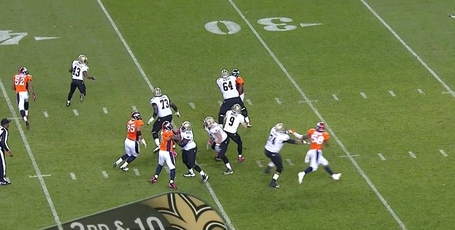 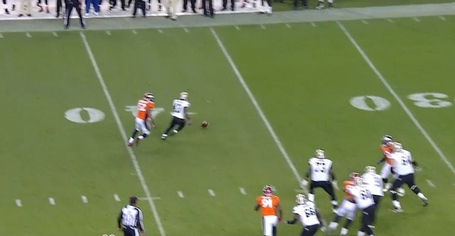 11 personnel, Shotgun, the back to the right, Lance Moore comes in motion. This is one of the very few plays I saw where the coverage was beat badly. Harris is toast, but a leaping Mike Adams makes Brees change his trajectory and put too much sauce on the ball. Overthrown...IN-COM-PLETE! 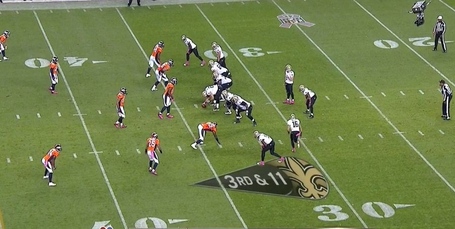 This last one is Champ Bailey being the man he is. Nothing else to show except his beautiful technique against M. Colston on a back-shoulder throw. IN-COM-PLETE!!! 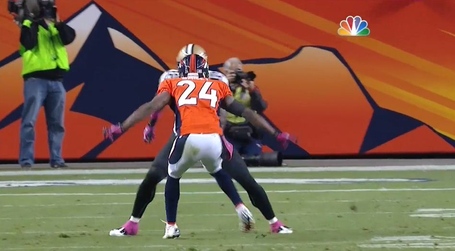 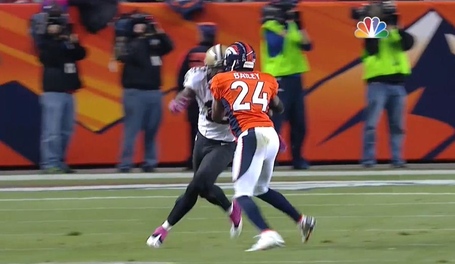 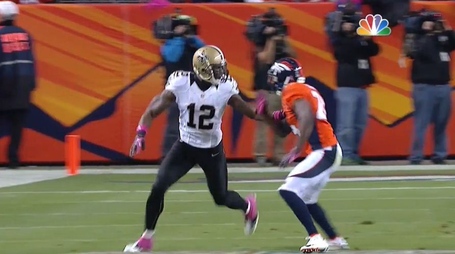 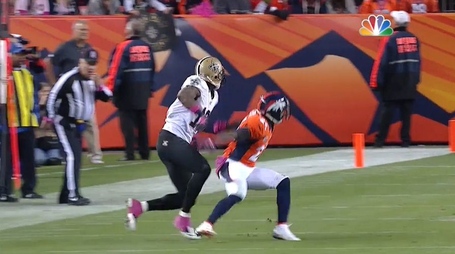 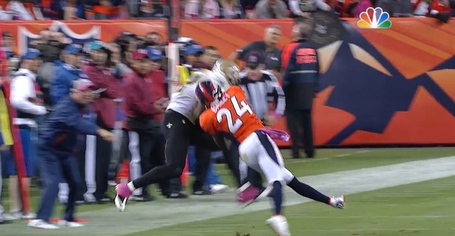 The Broncos were extremely well prepared and coached coming into this game. It seemed like they knew where Brees liked to throw the ball in certain looks and they put their coverages in the best positions to succeed. Scheme-wise, everything was solid.

Execution-wise, BRAVO! A scheme is only as good as those who execute it. And play by play especially on 3rd downs, the individuals in coverage made great play after great play.

When they were beat, some other factors came into play (including some luck) and what was open went for naught.

After breaking down this film, I am extremely excited not only for our defensive personnel groupings, but for Jack Del Rio and his play calling. This was a near-flawless effort all around. Bronco Mike and the rest of Broncos Country gives you a Mile High Salute Broncos D---you guys were spectacular! Keep up the good work....see you next time MHR!