The End of the Tebow Era: The Jerseys Left Over

Share All sharing options for: The End of the Tebow Era: The Jerseys Left Over 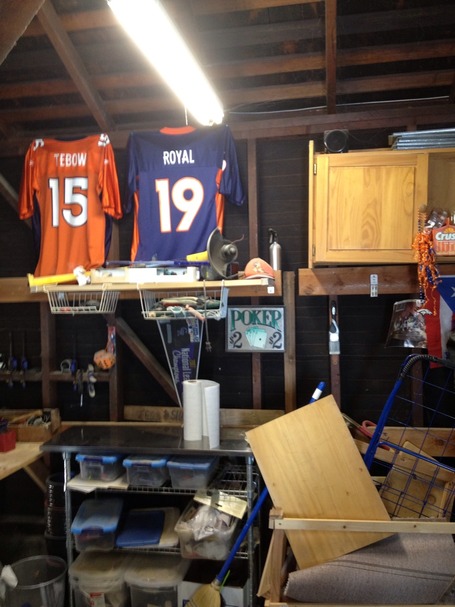 Following Jay Cutler's departure the spring of 2009, I, like many of you, found myself stuck with Cutler-themed Denver Broncos merchandise that I'd rather not have around. Not knowing what to do, I asked the MHR faithful what should be done with the T-shirt, jersey and figurine that I no longer wanted. That article can be found here.

Now, as Broncos fans we are faced with the departure yet another quarterback. Unlike Cutler, Tim Tebow was held in high esteem for what he did off the field and for leading the Denver to our first playoff win since 2005. However, yet again we are left with obsolete merchandise. Considering the the fact that Tebow's jersey sales were at or near the the top of NFL jersey sales, figuring out what to do with his stuff is now something that many of us now have to deal with.

Now that Tim Tebow is headed east, what do you do with your left over gear?

What I did with Cutler's stuff has, in a way, dictated what I'm doing with Tebow's (and Eddie Royal's). First there was the issue of the the Jay Cutler figurine-thing that I'd received as a wedding present. During backyard fence repairs in the summer of 2009, I deposited the Jay's figurine in the small void where my fence intersects my neighbors. As far as I know it's been there ever since.

Thanks to continued marital bliss, I wasn't in a position to acquire a Tebow figurine. The closest I got was the Desktop Tim Tebow (courtesy of the Denver Post) that has stood proudly on my fireplace mantle since it was carefully constructed. I know that it can't stay there any longer, but I also know that it won't suffer the fate as the Cutler figurine. Sadly, I know that it's time for Desktop Tim Tebow to say it's goodbyes to Desktop Von Miller and move into the garage.

The garage? Since my wife has made it clear that I am not allowed to take over the house with Broncos stuff (fireplace mantle aside), I have laid claim to the garage. This is where you will find Cutler's jersey today. Unable to throw it away, donate it, or deface it; I found a dark corner, frequented by venomous spiders, and hung it with the namplate facing toward the wall. I had no desire to look at it his name. Who wants a reminder of his ugly departure and the disappointing 2009 and disastrous 2010 seasons that followed?

As you can see from the photo above, things are different for Tebow and Royal. We Bronco fans had great times with both of them. Sure, I was disappointed that Royal defected to the Chargers, but it's not the first time Bronco free agents have made poor decisions and it surely won't be the last. Today, I was proud to go to my closet and take their jerseys out for the last time. As I pinned them to the rafters in my garage with the nameplates out, it felt good. Royal and Tebow were dedicated Broncos and though I can no longer wear their jerseys, I am happy that they have a place of honor to the right of my workbench and to the left of my buddy's drum-set that he insists he's going to sell... someday.

Then there's the issue of the Tebow T-shirt I own. I wore it all day yesterday knowing the end was near and now that we're just hours removed from the trade that sent him to the Jets, I'm still not sure what to do with it. The Cutler T-shirt was unloaded on a friend of mine who's a Bears fan (the colors are the same and there was no logo on them), but that won't be an option with the Tebow T-Shirt. Considering the respect I have to Tebow, I may have to wait and see what I want to do with it. Maybe donate it to charity... It seems that would be in line with Tebow's wishes.