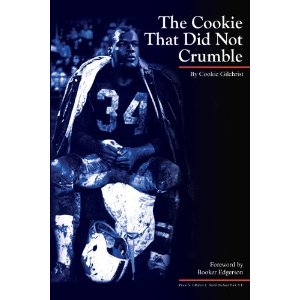 I just recently finished the newly released book, "The Cookie That Did Not Crumble", written by former Denver Bronco fullback Cookie Gilchrist (with contributions from Chris Garbarino) and I've got to say that for Denver Broncos and football history buffs this book is certainly something you should check out.

Though his tenure with the Broncos was short, it came during some of the franchise's most pivotal moments. After protesting the discriminatory treatment of African American athletes by boycotting the 1965 AFL All Star game slated to take place in New Orleans, Gilchrist was punished by being traded to the worst team in the AFL - the Denver Broncos.

Depictions of the pre-Lou Saban Broncos are hard to come by. Few people know about former coach Mac Speedie, but the book takes us back to that era and sheds light on what the Broncos were like during that time. Some could argue that it was under Speedie's stewardship that the Broncos became so bad that something needed to be done and thus Lou Saban was hired. Without Saban, many of the organizational reforms that put Denver on the path to becoming a first rate franchise may not have happened.

"The Cookie That Did Not Crumble" is also an essential read for those of us who are interested in player/NFL relations with regard to head injuries. Gilchrist was a major part of the movement to to get the NFL to acknowledge the long term dangers of concussions.