2012 Denver Broncos Draft Frontboard -- One Possibility Among Many

Share All sharing options for: 2012 Denver Broncos Draft Frontboard -- One Possibility Among Many

Most NFL draftniks are familiar with the term "big board" to describe a teams ranking and ordering of players in an upcoming draft. Fewer are aware of the concepts involved in breaking a big board down into manageable chunks, such as frontboards and sideboards. Read on to consider yourself among the few...

Above you can see a highlight from a sample frontboard I have assembled for the Broncos 2012 draft. On a frontboard a team will list out all of its draftable prospects, with position listed left to right, and quality, talent and role listed top to bottom, with the most talented prospects at the top. Some teams may list the positions left to right in the order they wish to prioritize them, however I have not done that here, because I plan on using a slightly more complicated system to prioritize them, based around Elway's insistence on using the term "impact" to describe what their decision-making process is all about.

In addition a team will assemble multiple sideboards, primarily a medical and character sideboard. Players on these sideboards are typically considered undraftable by a team, either due to medical concerns or off the field red flags. I have indicated possible medical and character sideboard players in my frontboard with the colors salmon (medical) and black (character). Note that Denver has likely investigated each of these situations thoroughly, and not all of them will be on their actual sideboards, though many of them will.

In addition, a final sideboard is constructed as the draft takes place, with drafted players moving off the frontboard and onto specific teams' boards. I have not included one of those here, though I do use one when watching the draft.

Below the fold, we can take a look at the Broncos frontboard as I imagine it, in its final stage before the draft.

Clicking on the image below, or (preferably) opening it in a new tab will open a higher resolution HTML version of the frontboard which you can zoom in or out of for better viewing. 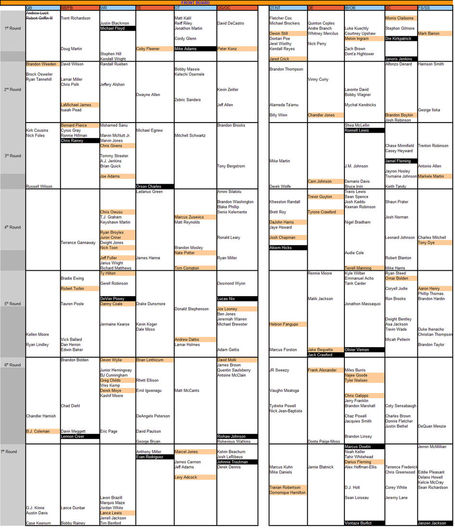 As you can see, even in the extremely condensed image above, a frontboard containing hundreds of players can be huge when layed out properly. If the medical and character sideboards were included here as separate boards rather than highlights, the entire thing would be massive indeed, but its organization allows quick and easy assessment of what Denver can do in any given scenario in the draft.

First some notes on the frontboard construction

Overall every player on the board is graded first for their straight football ability, including what they do best, what they do worst, and what role the team thinks they will occupy in the NFL, such as starting DC or edge rushing DE. Then the players are organized according to this general grade, flagged for medical or character concerns, and entered onto the board. Then individual players' grades are weighted by a teams' draft philosophy (need, BPA, some combination of both, etc.).

In this frontboard I have made the following changes in each players grade weighting (note that 'positive' refers to a grade higher than it otherwise would be, while 'negative' means lower):

Feel free to discuss the merits of these weighting criteria and to suggest your own in the comments. And if you feel like it, here is an .ods/.xls version of the frontboard that will allow you to make changes at will:

Back to the board, one final item to note is the gray bar on the left hand side. The grades for the prospects generally correlates to which round they may be taken in (though they are more a measure of starting ability) but there may be more first round grades than there are first round slots. The slightly darker areas of gray indicate areas of the draft where high value players will necessarily be available at the tops of the following round.

In this particular draft, there are approximately 4-8 more 1st round graded players (immediate starters) than there are selections, so teams in the top half of the second round will get a shot at some real impact. There are also fewer 2nd round grades(possible immediate starter in the right situation) than there are 2nd round slots, so by the time the second round is over, those teams (including Denver) will be picking from the last of a thinned out group of possible day one starters. I expect to see several teams attempt to move around in the second half of the 2nd round. A similar analysis can be done at every round-break.

Now, when a team is looking at this board, they have a lot of ways they can use it. Lets create a 2nd round example.

In this example we have zoomed in on the draft board as it stands as Denver goes on the clock with the #57 pick. For the purposes of this exercise, we will assume that no draftable players remain from the first round grades, or the top of the second round. Among the players expected to be around Denver's pick, several have already come off the board, including nice prospects like LaVonte David and Bobby Wagner. Also of interest is that a team jumped on Chandler Jones, a complete DE type with good height, weight speed measurables, despite his injury flags.

Going by the board alone, the picks to consider are RB LaMicheal James, versatile OG Jeff Allen, two-gap NT Alameda and IB Mychal Kendricks. Every one of these selections could meet a need for the Broncos and all are top talents at this draft spot according to the board.

But if we dig a little deeper we find that not every selection is ideally suited at this spot. LaMicheal James has a spotty medical record, especially with hamstring issues that have plagued him. Allen will be changing positions to move inside at the pro level. Alameda projects as a 3-4 stalwart with weight issues, and borderline immediate impact ability. Kendricks looks good but projects to move inside after playing outside in a 3-4, so scheme and role fit aren't very good. Does this mean we are stuck with the lesser of evils?

Not at all. A second round grade is a general grade, and we shouldn't limit ourselves to only the top 3 or 4 guys in this scenario. If we extend our range to include Pead, Winn, Boykin and others, we actually give ourselves a much better chance to grab immediate impact with this high value pick. Personally I would rule out Pead at this pick only because he is a bit one dimensional here (but very good at what he does). I also won't look too hard at Winn, but mostly because in this example I assume Denver took a DT/NT with their 1st rounder (Poe). Safety George Iloka is there (I cut him out due to image size restrictions), but I don't think he will have much opportunity to impact the lineup due to some of his tackling deficiencies. I really love the idea of a DC here, and Boykin is highly rated. He is a feisty player that I like a lot, great speed, very competitive, explosive in his playmaking ability. What I don't like is projecting him at the nickle spot, or substituting on the outside in an emergency. He has difficulty with big WRs, and isn't nearly physical enough for my taste. I LOVE that he is a top return man, though. One thing that makes me wary is that he hasn't been able to pass a physical due to an injury last winter. Denver may have more confidence in his right fibula at this point, but I am wondering if I have another option.

Very close in grade to Boykin is Josh Robinson out of Central Florida. He is a great nickle candidate, with fast feet, great direction change and very fluid hips and ability to turn to either side to stick with a play. He first came on my radar vs. AJ Green in the 2010 Liberty Bowl, where he was impressive. He was the top rated DC athletically, and his jumping ability more than makes up for his borderline height. He doesn't routinely struggle with bigger WRs or TEs. Of all the above players under consideration, I am most confident in Josh's ability to come in and make a difference right away as a starting dime or nickle back. On a side note, I don't like how the DC talent curve falls after this round, so I am all to happy to make a move on a corner now.

This is a tough call on a lot of levels, and as you can see, EFX have their work cut out for them. Do you take the best chance for impact? The best overall grade? The weakest roster spot? The most exciting player?

What would you do in this scenario?

I'll spare you my thoughts on how the board fell, and leave you with a short and sweet 7-round Denver mock based on this frontboard. Happy Draftivus!