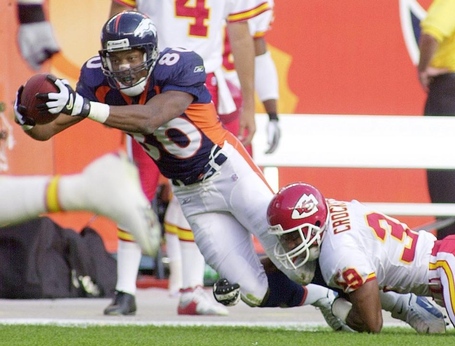 Denver Broncos CEO and Owner Pat Bowlen announced today that Wide Receiver and fan favorite Rod Smith will have his name and number hung from the Ring of Fame facade at Sports Authority Field at Mile High on Sunday September 23, 2012. The Induction ceremony will take place during halftime of the Week 3 contest against the Houston Texans.

A hip injury that he suffered in 2006 required a complete hip replacement and Rod announced his formal retirement from professional football on July 24, 2008.

"The Broncos fans are special to me, and I appreciate all you guys really supporting me. I love when I see little kids running around the mall and they have on a No. 80 jersey --- It just makes me smile. They don't know how much that means to me. I'm letting you know, if I don't come up to you personally, I appreciate you, every single one of you."

It is appropriate that Smith’s induction comes against the Texans. He has some friends on Houston’s staff, including their head coach Gary Kubiak, who played for the Broncos from 1983-91 and then was the Broncos Offensive Coordinator from 1995-2006. Texans Offensive Coordinator Rick Dennison played Linebacker from 1982-90 and coached in Denver from 1995-2009. Wade Phillips (who was the head coach during Rod’s rookie year) coached the Broncos from 1989-94. Assistant O-Line coach Jim Ryan played Linebacker for the Broncos from 1979-88 and coached from 2004-08. Quarterbacks coach Karl Dorrell coached from 2000-02 and Strength and Conditioning coach Cedric Smith from 2001-06.

Smith had a stellar collegiate career at Missouri Southern. He finished his college days with league records in career receiving yards (3,043) and Touchdowns (34). Rod also broke the school's catch record (153), along with being named by several groups as a 1st-Team All-American in his senior year. In his final campaign, Smith caught 63 passes for 986 yards and 13 Touchdowns. He was named the school's Outstanding Graduate in 1994, after completing his collegiate schooling with degrees in economics and finance, general business, as well as marketing and management. Those diplomas have made Rod a successful businessman after his retirement from the Broncos. He is currently a coffee merchant and owns several investment properties.

This honor by the Denver Broncos could not happen to a more deserving man in my opinion. Rod Smith has been the underdog who is living proof that hard work and dedication can and will create success. He is a class act and as humble a man as you could meet.

With two Super Bowl Rings, three Pro Bowl appearances (2000, 2001, 2005), and a controversy-free career noted for professionalism, Smith left the Denver Broncos as one of the most well-loved Broncos players of all time.

The Denver Broncos Ring of Fame was created in 1984 by team owner Pat Bowlen to honor former players and administrators who played significant roles in the franchise's history.

A Mile High Salute to Rod Smith, the 23rd member of the Denver Broncos Ring of Fame.