"If you made a plan B, you planned to fail." "Why did you need a plan B? All that should have been included in plan A". "If everything is included in plan A, why not just call it 'The Master Plan?'" I think that is what John meant when he said there was no plan B! They have a master plan!

A lot of talk has been flying around about the "doubts" as to whether Peyton Manning can stay healthy, whether or not one hit will re-injure his neck and put him out for the season.

I had read a lot of what the physicians involved, and others, had said about that issue, but I had misunderstood a few things. My main misunderstanding was why he had stem cell therapy done.

I have now done a great deal more research into the matter, and found out that the therapy was to help his damaged nerves to regenerate. I had erroneously believed that it was the bones that were the concern. Take a look at the typical problem below.

These illustrations will help us get to the bottom of the issue. 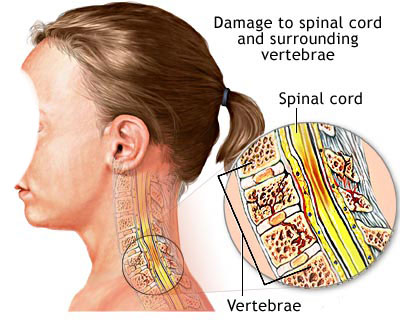 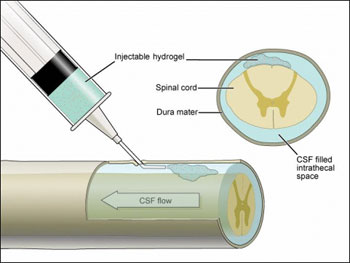 After a spinal cord injury, many of the nerve fibers at the injury site lose their insulating layer of myelin. As a result, the fibers are no longer able to properly transmit signals between the brain and the spinal cord contributing to the loss of sensation and mobility and even complete paralysis.

Unfortunately, the spinal cord lacks the ability to restore these lost myelin-forming cells after trauma. Tissue engineering in the spinal cord involves the implantation of scaffold material to guide cell placement and foster cell development.

These scaffolds can also be used to deliver stem cells at the site of injury and maximize their regenerative potential. (That is exactly what PM had done.) It wasn't an issue of the bulging disc being his main concern. That was repaired with the surgery and rehabilitaion, and is a very common procedure.

Peyton's concern was the regeneration of the nerves, which are involved with his ability to grip and throw a football. He had experienced tingling and numbness and a loss of strength due to the nerve damage. It is obvious, to everyone around him who have caught balls from him, that the procedure worked.

So, why is there still concern, and why did Peyton go to Europe to have this procedure done? Can't it be done in America? Is it illegal here? Let's take a quick look at the history of stem cell research and it will answer the question for us.

In the early 1900's European researchers realised that the various type of blood cells e.g white blood cells, red blood cells and platelets all came from a particular ‘stem cell'. However, it was not until 1963 that the first quantitative descriptions of the self-renewing activities of transplanted mouse bone marrow cells were documented by Canadian researchers Ernest A McCulloch and James E Till.

Research into adult stem cells in animals and in humans has been ongoing since this time, and bone marrow transplants - actually a transplant of adult stem cells - have in fact been used in patients receiving radiation and chemotherapy since the 1950's. Stem cells can be classified into three broad categories, based on their ability to differentiate.

Totipotent stem cells are found only in early embryos. Each cell can form a complete organism (e.g., identical twins).

Pluripotent stem cells exist in the undifferentiated inner cell mass of the blastocyst and can form any of the over 200 different cell types found in the body.

Multipotent stem cells are derived from fetal tissue, cord blood, and adult stem cells. Although their ability to differentiate is more limited than pluripotent stem cells, they already have a track record of success in cell-based therapies.

Developments in biotechnology in the 1980s and 1990s saw the introduction of techniques for targeting and altering genetic material and methods for growing human cells in the laboratory. These advances really opened the doors for human stem cell research.

Then in 1998 James Thomson, a scientist at the University of Wisconsin in Madison, successfully removed cells from spare embryos at fertility clinics and grew them in the laboratory. He launched stem cell research into the limelight, establishing the world's first human embryonic stem cell line which still exists today.

Suddenly there is an enormous out cry from the American Christian Right condeming this research as a blasphemous act toward God. Man creating babies in a test tube? Man playing God? God forbid! (If you aren't aware of the political power of America's Christian Coalitions then I am wondering where you've been.)

It wasn't until the November 2004 election that California won the Stem Cell Research Funding authorization initiative that was on the ballot. It won by a 60% to 40% margin. It established the "California Institute for Regenerative Medicine" to regulate stem cell research and research facilities.

Now, Dr. Barth Green, who founded the Miami Project to Cure Paralysis, says his center is in the final stages of getting FDA approval to treat spinal cord injuries with Schwann cells - adult, peripheral nerve cells that help with regeneration.

This is the primary reason Europe is ahead of the USA in this area, and the reason Peyton chose to go there. The United States Medical Community discourages Americans from seeking this theropy in Europe, stating, in their usual pompus manner, that there are dangers involved.

I'm certain that there are. The point is, you can be killed by an MD in America just as quickly as you can anywhere. It happens all the time. The fact is that Peytons Physicians know the truth, and Peyton obviously did his research.

You may be wondering at this point where this is leading.

There have been misleading reports by news agencies (imagine that) that indicated that the reason for Peyton's numerous surgeries was because they simply were not working.

"The bulging disk in Manning's neck has thus far defied three surgical repair attempts and months of physical therapy, and the 35-year-old QB is expected to be out of the game for two to three months, and possibly more. Manning has already missed his team's first two games."

As if that isn't enough, they try to substantiate their claims by quoting another news source, The New York Daily News.

"According to a report in the New York Daily News, the alleged stem cell treatment did not work, resulting in the team subsequently deeming the surgery 'uneventful.'"

Well now! That must be the truth right? You have it from two reputable news agencies. Why wouldn't everyone in America beleive this garbage instead of Peytons own Dr's?

Doctors say the area of Peyton Manning's neck where two vertebrae were fused should be stronger than ever. A "single level anterior fusion," is a common procedure where a disc is removed and two vertebrae are fused using bone grafts to alleviate back-and-neck pain because the damaged disc had pinched a nerve.

Dr Wellington K. Hsu, a spine surgeon and assistant professor at Northwestern University, says the fused area should not be vulnerable. "In fact, his neck is probably stronger now than it was before the surgery because he has a solid, bony fusion," Hsu said.

"Once the fusion occurs, then really that fusion is going to be as strong as anything," said Dr. Eric McCarty, chief of sports medicine at the University of Colorado Anschutz Medical Campus.

"You do have to make sure that it's healed and that the bones are completely fused to each other. But once that occurs, that's not going to break.

But once you've had a nerve injury, nerves take a long time to regenerate, if at all, and if you've had a lot of compression on a nerve, you could have some permanent damage.

Basically the nerve is the electrical power to the muscle, and sometimes that power gets crimped and it doesn't regenerate all the way. And that's the real issue in terms of recovery."

There are many concurring statements and if you need more proof just look it up. The point is that the problem for Peyton is not the repaired disc! It was the regeneration of the nerve.

Problem solved! He has plenty of grip, and plenty of zing on the ball! Just read what his new, very excited receivers are saying. Sounds to me like the front office doesn't need a Plan B any more than any other team in the NFL does.

Please name an NFL team who would not be worse off with their back up QB having to take over the game.

I'm excited to be able to watch PFM play for us until he decides to hang up his cleats. GO BRONCOS!!!

Here is some additional reading on the issue if interested.

Do you believe that PFM has any higher risk of injury than any other NFL starter this year? Please explain.