Some Clarification is in Order: Manning and the Offense

Share All sharing options for: Some Clarification is in Order: Manning and the Offense

We've seen a number of posts looking at old Peyton Manning seasons from a number of different perspectives, but what I feel needs to be addressed is what a Manning-lead offense looks like and how the Denver Broncos parts fit into that mold. Over the past few weeks I've covered a few topics including a review of the 2011 season and a study of the idea of clutch, and while much of that may have seemed irrelevant at the time, due to free agency and the draft, I did organize my series in this order for a reason, so that we can see the weaknesses and strengths of the 2011 Broncos and see what areas the Broncos will improve or regress in 2012.

Now getting back to the topic on hand, in this article and the next we'll be covering a few different topics, today we'll be looking at:
- Formations
- Play calling

With the overview covered, it's time to start studying. I'll try to keep this to short statements rather than rambling on so that this moves quickly.

When it comes to the offense Manning ran in Indy, he liked it simple. The entire basis of his offense is centered around a very basic offense that he alters based on the situation, both in the huddle and at the line. While many will question this idea of simplicity, the more you study this offense, the more clear it becomes. It's in the play calling, the routes, the formations and the skill set. Former Colt backup quarterback Jim Sorgi said:

I can give the defense all the information that I can, and it’s, ‘Can we get to Peyton? Can we knock him down? Can we get to him before the ball’s out?’ You can know what route’s coming and still not cover it.

When it’s crunch time, they’re going to run the same play they ran 10 years ago in that situation. They just feel they got the best quarterback, the best receivers, the best O-line, and they’re going to execute better than the defense will.

Another smart man called it a machine that everyone know what is coming but it doesn't matter, if a team executes, doesn't matter if you know it's coming, it's going to work. It's the Dan Marino offense, so to speak, where there is no defense for the perfect pass. Basic, flexible and deadly, the foundation of the offense Peyton Manning used to become one of the greatest passers of all time.

Now I was supported by a few great people, the best was Pierce Lively who I got a number of quotes and ideas from, so shout out to Understanding the Trickeration. Go to them for anything, there have great, indepth articles.

Since 2005 the Colts offense have run out of only four formations, but only two were used the majority of the time:

So the majority of the time Manning was using 3 wide receivers, 1 tight end and 1 back. Now out of that formation he's able to maneuver the players around to create mismatches, he could move the tight end back behind him to pass protect the middle blitz or an inside run blocker. Or he could move his running back to the slot if he sees a hole in the defense. These basic formations allow great flexibility for a smart quarterback to make the most of what the defense is showing.

Now fans of the 4 wide out set and using the Spread offense is built around putting as many offensive skill players on the field at once to try and create matchups that are good for the offense. We saw this offense under Josh McDaniels and at times last season. I don't really care to get into which is a better offense, but the main reason a team like the Colts used their 3 wide out set is because it gets their best players out on the field and didn't require them to carry 6+ wide receivers on the roster because they only really need 4 quality wide receivers. By focusing on a few talented players you are able to maximize those players playing time using a quarterback who has the skill to execute perfectly.

Maximizing a Formation with Audibles

The routes that the wide receivers, tight ends and running backs run are also very basic except that the inside and back routes have options that Manning can adjust. Now I'm no image guru, can't whip up great graphics, but I hope this gets the point across: 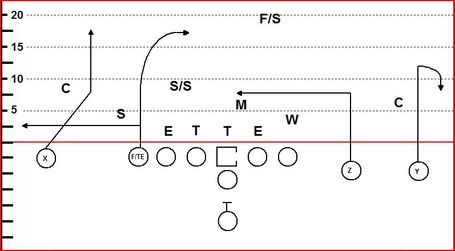 Now this is a basic formation that Manning will usually run out of, a 3 WR, 1 TE and 1 RB. This play is centered around the strong safety and what he does and depending on what he does Manning will audible the tight end to adjust to whether there is a blitz or not from the Sam linebacker and whether or not the the strong safety is in coverage or run defense. From these two ques Manning can adjust and make the best call without changing the formation. If the Sam is blitzing but the strong safety is in coverage, he'll have the tight end do a shallow out route for a quick, safe completion while the wide receiver blocks his corner. If the Sam is blitzing and the strong safety is pushing the line, the tight end will run a deeper route to exploit the lack of coverage underneath the free safety. This could be done for countless plays, but I don't want to take up too much time, so to sum this up, just basic formations and routes but Manning goes to the line with at least one skill player willing to adjust his route, we'll look at one more and then move on: 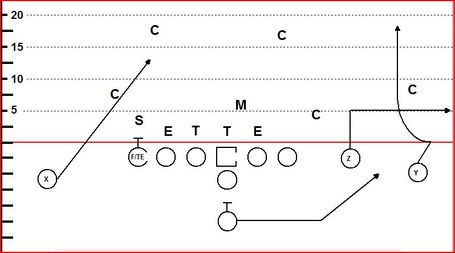 Same formation, but this time we see that the defense is using a nickel defense with an extra corner in, replacing a linebacker. Manning with then notice one of two things:

-The nickel corner is inching up to the line and suspects a blitz and has his back stay in and block while he either hits his slot wide receiver (Z) or right wide receiver (Y) since the safeties are sitting deep, one of the wide receives will get open.

or he'll see this:

- The corner is coming up to the line but Manning believes the corner is just playing a tight man coverage. With that done be changes his back to run a route that will be check down, since the middle linebacker is almost always in zone from this front, if the corner shuts down his wide outs in man coverage.

Now obviously this is just a very simple version, we largely ignored the middle linebacker, who is key to most defensive coverages. And this also isn't to say that the offense won't see audibles that change multiple routes like we saw under Orton, but I just wanted to keep it simple because most of us don't ever see what Peyton Manning will see when he walks up to the line. But I hope I got the point across the power of the audible from such a basic formation. The audible combined with the no-huddle offense is potent when combined with perfect execution and a smart quarterback.

One thing many forget is that Manning doesn't have a rocket arm. He can make all the throws, but doesn't have a monster arm like Jay Cutler or other strong arm quarterbacks. Because of that we will actually likely see the fewest deep passes in around a decade. It was obvious that the Broncos were a down field team under Plummer and Cutler, and that continued under Orton and Tebow, both of whom were in the top 5 in the league in attempts over 20 yards in the seasons they started. Peyton Manning has never ranked in the top 5 for deep passes in his career and ranks 16th in deep attempts since 2005 and actually ranks 21st on deep accuracy, so it is a solid line of thinking that we will see that trend continue. That's not to say we won't pass deep, but over the past two seasons the Broncos ranked 4th in deep attempts, so we will see a decrease in deep attempts.

Obviously we are looking for a huge upgrade from Tim Tebow in terms of accuracy, but we should keep in mind while Manning is an accurate quarterback, he has never been a super accurate like Brew Brees or Aaron Rodgers. Having said that we should expect to see accuracy just above from what we saw from Kyle Orton in 2009 and 2010. Now I know his name is like a bad word, but during his time in Denver he was accurate. Now I use accuracy rather than completion percentage because over the past few seasons the Broncos have had some drop problems. If we turn drops into completions Orton completed nearly 70% of his passes (69.3%) while Manning completed 73.1% if we apply the same rules. So we shouldn't expect a super accurate quarterback compared to recent seasons, but it will be a nice upgrade over Orton and Tebow in 2011.

I won't spend too much time on this since I covered it these two articles, link and link, but I will say that similar to completion percentage we'll see a big jump from Tebow but it will be at about the same level as we saw from Orton. Here's a quick list of 3rd down success rates:

- Teams will almost never drop their corners and linebackers into coverage. Tedy Bruschi said this:

The thing I’d say is that zone coverage should not be utilized in this game. Peyton Manning is too good. It seemed like he always knew what we were playing — Cover 3, Cover 2, whatever it was — and always found the right receiver to throw to.

- Manning has said he uses a little psychology during the game. Game theory (basing your decision based on what you believe others will do) is a big part of his play calling in the huddle and at the line. Now most offenses use this, it's the whole idea for the play action, a defense sees you run it over and over again they can then be caught off guard more easily on a play action pass. If you only ran play action passes, they would stop working. Chris Brown, a writer for the site Smart Football, saw this in Manning's play as well, but beyond what most offenses do. He saws that the better you are at being a passer when you execute, the easier it is to manipulate the defense. Between pump fakes, play action, draw runs, looking off the safety and audibles, they are all made better by being able to execute the pass. You see this with different aspects when you look at a quarterback like Tim Tebow or Michael Vick when he was in Philly. While neither was a great passer, their mobility helped the run game, the same goes for being a great passer, it helps out other aspects of the offense.

- I also want to note that we could go through Manning's main routes and things like that, but considering those are likely to change because of the wide receivers here, I feel that this is one case where the past isn't a good marker since Manning is known to adjust the routes based on his teammates but his formations remain the same almost no matter what, so we'll be moving on without covering that.

Now I know this isn't the most indepth or thorough article around, but I wanted to try and keep it as simple as possible to get my point across. Now let me know what you thought and as I finish up the following article on how our personnel fit into this system I'll do my best to answer them. Hope this was educational and a break from my usual tables and the recent post-draft talk.