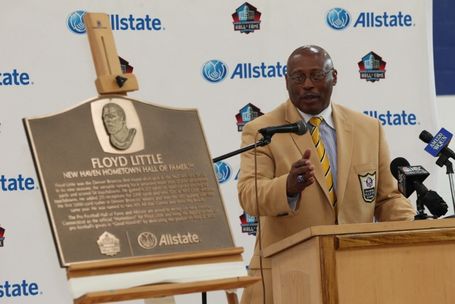 Despite never having much of a supporting cast, Floyd Little dominated pro football during the late1960's and early 1970's. With 6,323 rushing yards, 2,48 receiving yards and 54 touchdowns, Little was a two time AFL All-Star and three time AFC-NFC Pro Bowl selection. It seemed all but destined that he would be hastily enshrined in the Pro Football Hall of Fame. However, when Little wasn't selected in the first few years after becoming eligible in 1980, it became agonizingly clear that he would have to wait. There were even times when it seemed as though the greatest running back to ever wear the orange and blue would never get his due.

In 1983 the College Football Hall of Fame rightfully enshrined #44 as one of the greatest to play the game. Considering Jim Brown and Ernie Davis had come before him at Syracuse, his accomplishments had to be remarkable to stand out from a crowd like that. He was and still is the only three time All-American to play for the Orangemen.

It would be almost another thirty years until the Pro Football Hall of Fame would finally come knocking. Thanks to the efforts of his longtime friend/fan Tom Mackie, dogged determination of his fans and otherworldly patience demonstrated by Little, he was finally enshrined on August 7, 2010.

Yesterday, Floyd was recognized by the Pro Football Hall of Fame along with Allstate Insurance as part of their "Hometown Hall of Famers" program honoring the hometown roots of the NFL greatest players. Roger Harrison, Little's longtime friend since High School, presented Little with a plaque during a special ceremony at James Hillhouse High School in New Haven, Connecticut, where Little had been a standout athlete. The plaque will be on display in perpetuity to honor Little as well as serve as inspiration for the students at Hillhouse High.

In addition to the plaque a Hometown Hall of Famer road sign will also be on display in New Haven. There's something wonderful about monuments to one of the greatest Broncos to ever play the game being on permanent display in Patriots country. Here's to you Floyd! Congratulations!