Share All sharing options for: 2012 Broncos Training Camp-Quick Hits From the Kaptain-7/28/12 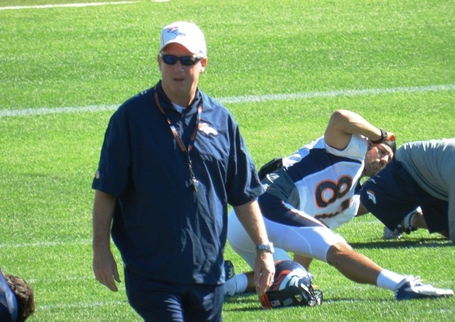 There was another record crowd (4400+) at Dove Valley this morning and record temperatures as well. The Broncos practice went well today, with no glitches or injuries. Peyton Manning even took it up a notch with the tempo during 11 on 11’s and once more during the Wide Receiver/Defensive Back one on one battles.

Quinton Carter was the lone MIA player, but there were two surprise visitors at practice -- Terrell Davis and Karl Mecklenburg. Chris Kuper got a few more reps as he recovers from a major leg injury.

The crowd had multiple reasons to cheer today and not all were a result of a player. The breeze made an appearance four or five times to soften the heat at times. Highlight catches by Eric Decker and Matt Willis brought on more applause. A few bursts of speed by Ronnie Hillman and Andre "Bubba" Caldwell created some "ahhs". Joe Mays and Danny Trevathan played enforcer with some hard pops and stiff arms by Mario Fannin. and Jeremiah Johnson made the fans clap.

Peyton Manning’s passes were crisp for the most part and he toyed with the defense a little with his pre-snap vocal signals. He even caught a lineman or two jumping early a time or two.

As I said, Eric Decker and Bubba Caldwell had noticeable outings, but Matthew Willis made some very good catches. I will say right now, that if Willis keeps doing that, he will have Peyton’s attention.

Defensively, Champ Bailey started the practice off with some swagger to set the tone and fire up the "D." He got beat long once by Eric Decker, but battled well and kept everything else in front of him all practice. He also got a measure of revenge and broke up a handful of passes, smiling the whole time.

Derrick Wolfe recovered a muffed snap exchange by Caleb Hanie (I didn’t notice the 2nd team Center). Omar Bolden had an interception on Caleb Hanie and Rafael Bush took one to the house against Brock Osweiler.

Brock had some highlights too. He threw a quick post to Jeremiah Johnson for a touchdown. Manning and Decker connected for a pair of touchdowns, while Demaryius Thomas and Brandon Stokely each caught one for six.

Rahim Moore and Mike Adams were paired together at Safety with the starters. Davis Bruton paired up with a platoon of Rafael Bush and Duke Ihenacho for the "Two’s."

The random quote of the day came when a Receiver was complaining about Holding during the WR/DB one on one drills. A Defensive Back replied, "Ain’t no Holding in Practice."

The autograph sessions have undergone a bit of a change. More players are available this year. Whether that is due to the increasing crowd, the increasing generosity of the players, or a change in philosophy due to the Aurora incident, it is a great thing for the fans in Broncos Country. I was able to get signatures from Rahim Moore, Mike Adams, Tracy Porter, Drayton Florence, Syd'Quan Thompson, Omar Bolden and JD Walton, but there were at least 20 players out signing autographs, including Champ Bailey and Peyton Manning.

If you are close enough to attend Training Camp, I implore you to show up for at least one practice. You won’t regret it.

This is just something quick for you to ingest while I make the drive home, so stay tuned.