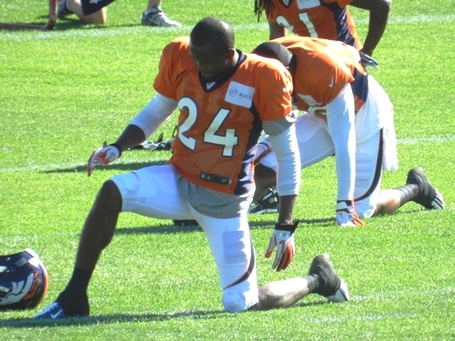 I plan my arrival early enough (6 am) to ensure a spot in the parking lot. I found Gary (PearlJamBroncosGFunk) and deliver a pair of Broncos one-sies for his new daughter Lily. When they allow to us enter, we take a spot at the far 43 yard line and settle in. It is already hot and taking note of the line, it looks like another record crowd. I also meet fellow Broncos blogger Brenda Stidham, who writes for Denver Horse Force.

At 8:35, David Bruton emerges in full pads and Brock Osweiler begins to warm up with a ball boy. The rest of the team filters out in their position groups. The Jugs machine is set for the beginning stanza with the Special Teams Unit. HORN.

Special Teams coach Jeff Rodgers has the Punt Return Unit drilling 1 on 1 in their break and retreat from the Line of Scrimmage and their turn around and block technique. He stresses that "if you can read the players name, don’t block him." Sage wisdom from the coach.

As an aside, I really like this attention to different techniques during drills. This is the time and place for instruction.


Now it’s time for the 1st team 11 on 11’s. Champ Bailey swaggers around the Defense and gets the boys fired up to set the tone for the day.

I notice Von Miller guarding Jacob Tamme on the first play, which is an outlet pass completion to Willis McGahee. Willis takes a handoff around the right side and turns the corner on the next play. Demaryius Thomas is drawing coverage by Champ Bailey early in this segment. Peyton Manning hits Eric Decker in a crossing route from the slot. This segment looks to be all about the short passing game. Also of note, is the fact that is at 1/2 speed. Danny Trevathan is playing at the Weak side Linebacker position for a look. He will end up rotating with Wesley Woodyard at times throughout the practice, but in this part of practice, Danny is getting the reps with the 1st team.

Knowshon Moreno takes a set of reps at Running Back. He ends up getting one carry and pass blocking the rest of the time. Stokely catches a Manning pass on a short crossing pattern and then Andre Caldwell makes a very nice catch.

Peyton Manning is toying with the Defense now with his vocal stammering. I feel sure much of it means absolutely nothing, but it has an effect on the Defense as he catches them jumping the count. None of the defenders go offsides, but it causes them to have to reset their feet before starting their pass rush. They lose momentum that way.

Matthew Willis and Lance Ball each grab a pass form Manning and then a nice cool breeze blows through and the crowd breaths a heavy sigh of delight.

Another thing I notice on the pass to Lance Ball, which is an outlet pass late in the play. Manning waits on the play, then turns and makes the pass to Ball. The thing is, he had his arm already cocked in the direction his pass was going before he even looked at the target. He threw the ball milliseconds after seeing Ball and it was like Manning already knew the exact direction the pass was going. That decision making will pay huge dividends as compared to the 2011 season. Of course, if the receiver isn’t in the spot he’s supposed to be in, a Manning tongue lashing will commence.

Eric Decker makes a catch on a comeback route and Demaryius Thomas makes the grab while running a post pattern.

Chris Kuper is working at Right Guard during this set. Rahim Moore and Mike Adams are the Safeties.

Jacob Tamme catches a Manning pass on a square in. Wesley Woodyard substitutes for Danny Trevathan. Peyton and Matt Willis connect on a quick sideline pass and then Joel Dreesen makes a nice grab on a low pass. HORN.

The players spread out across the field for their stretching. Ten minutes later, the HORN sounds and the players move into their individual position drills. This routine will not change throughout Camp. The Offensive Linemen hit the sled or square off against one another, the Tight Ends do their own blocking drills, the Running Backs run the hurdles and slalom drills while carrying the ball with coach Eric Studesville trying to strip the ball. Across the complex on the opposite field, the Defense goes to work. The Quarterbacks are to my right down in the red zone area and the Wide Receivers are drilling directly in front of my position.

After about ten minutes, the Quarterbacks converge with the Running Backs for hand off drill with the running lane mats. The Receivers change their drills and add a "contact after the catch" feature. Eric Decker and Demaryius Thomas hold flat square blocking pads and stand a few feet apart, facing each other. As another receiver makes the catch, he turns around and gets blasted by the blockers. Sometimes the contact comes simultaneously with the catch and sometimes the receiver gets a step, depending on where coach Tyke Tolbert places the ball.

The Tight Ends and Quarterbacks assemble and join the Wide Receivers for some passing drills, while the Running Backs hit the single heavy sled.

The passing drill consists of a Tight End and a Wide Receiver lining up on the same side of the field. Two Quarterbacks take snaps simultaneously, then pass to the two receivers. The Tight End on the inside runs an out, while the Wide Receiver runs a go or a post. It makes for some interesting viewing, something along the lines of Pairs synchronized swimming. Another breeze decides to grace us with it’s presence and that brings another HORN.

I’m going to take this opportunity to split up this journal into two parts and end this post right here.

Have no fear, I am only halfway through and part 2 is still to follow.